Dwarves and mines are a match made in heaven. These short but fierce creatures have a compulsive love for shiny rocks that makes them disregard event their own safety and even venture in outer space in pursuit of them. And we should be grateful they are so reckless, otherwise, we would have never gotten Deep Rock Galactic, one of the best co-op first-person shooters released in recent years.

Deep Rock Galactic stars a team of space dwarves employed by the titular intergalactic mining company, as they are sent to the planet Hoxxes IV, an inhospitable planet with rich material deposits. Inhospitable for dwarves but not for the alien creatures that inhabit its diverse biomes.

Deep Rock Galactic isn't going to be remembered for its story, as there simply isn't one. The only thing you need to know that mining is quite a dangerous business, and intergalactic mining even more so. This is not to say that the game doesn't have any personality, as the four dwarves, who are identified by their specialization - Gunner, Driller, Scout and Engineer, are memorable in their own way, making fun remarks every now and then to liven up the oppressive and claustrophobic atmosphere of the Hoxxes IV underground. 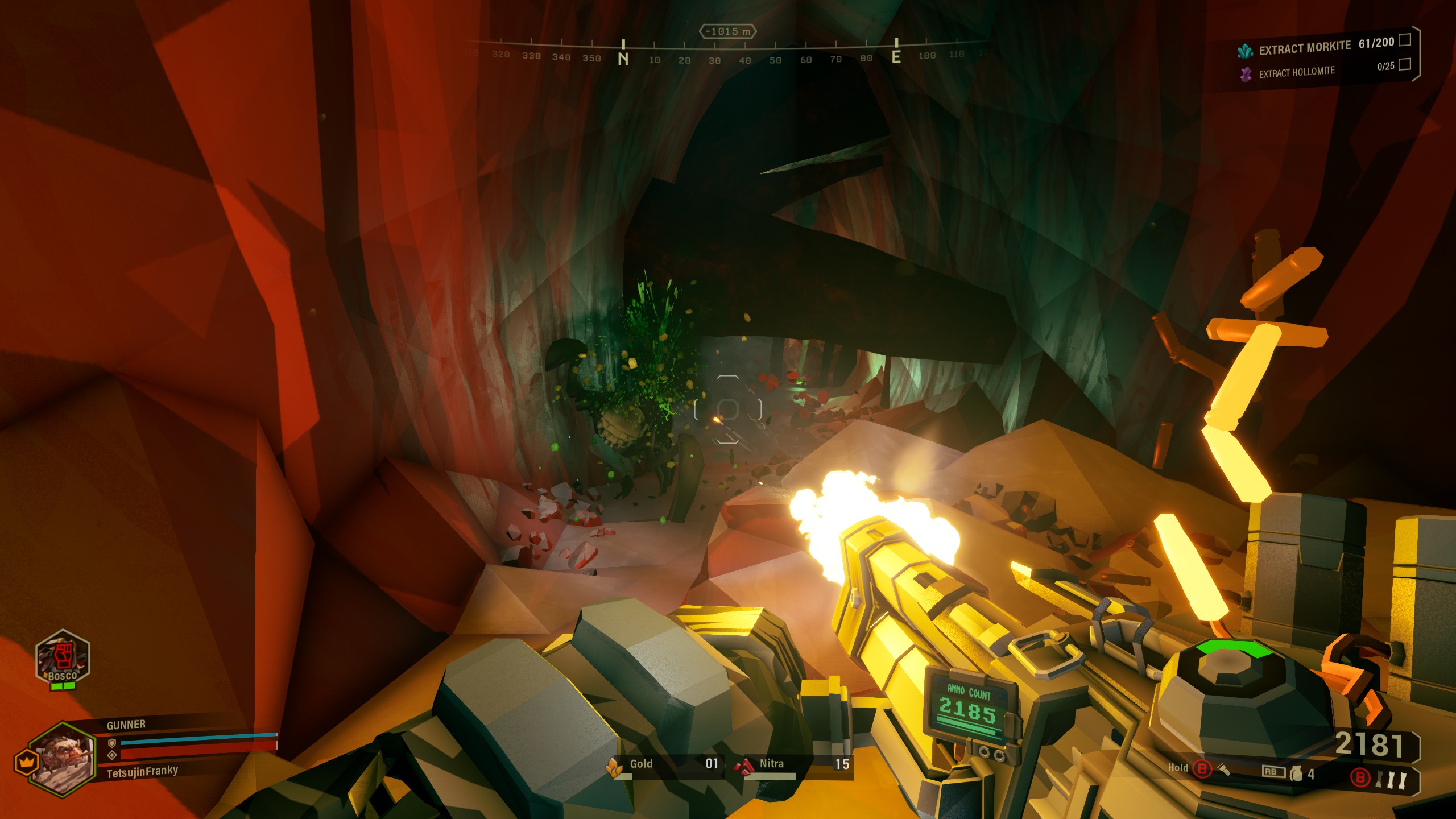 If the game is perhaps lacking in the story department, it definitely isn't in gameplay. Deep Rock Galactic features an excellent co-op first-person experience that feels engaging, deep, and most of all, extremely fun.

The game does an excellent job of easing players into the experience with a tutorial mission that teaches all of the basics. No matter your chosen dwarf, you will be heading down some extremely dark tunnels, which can be lighted up for a short amount of time with flares, navigate caves with the help of the handy Terrain Scanner, collect minerals and other resources, defeat aliens or salvage materials and equipment left behind by failed expeditions, call the escape pod and follow the MULE, a robotic companion which supports the miners in several ways, to return the base and reap the rewards.

As soon as the tutorial mission has been completed, players can finally start sinking their teeth into the game's meat and get a better look at the four mercenary miners, all coming with unique abilities that make them excel for certain tasks. The Gunner is the more offense-oriented miner, armed with the Lead Storm Powered Minigun that can quickly turn enemies into mincemeat; the Scout is the fastest available miner, equipped with a reusable Grappling Gun for improved mobility and the Flare Gun, which is used to light up larger areas than normal flares; the Driller is a great support dwarf who can dig through galleries much faster than with the regular pickaxe thanks to the Titanium Powerdrills; the Engineer, another support-focused dwarf, who can create platforms for its teammates with the Platform Gun, place automated Sentry Turrets and even hold his own in a fight with the Combat Shotgun and Grenade Launcher. Despite versatility, players aren't supposed to stick with just one character, as specific team compositions can make certain mission types much easier. 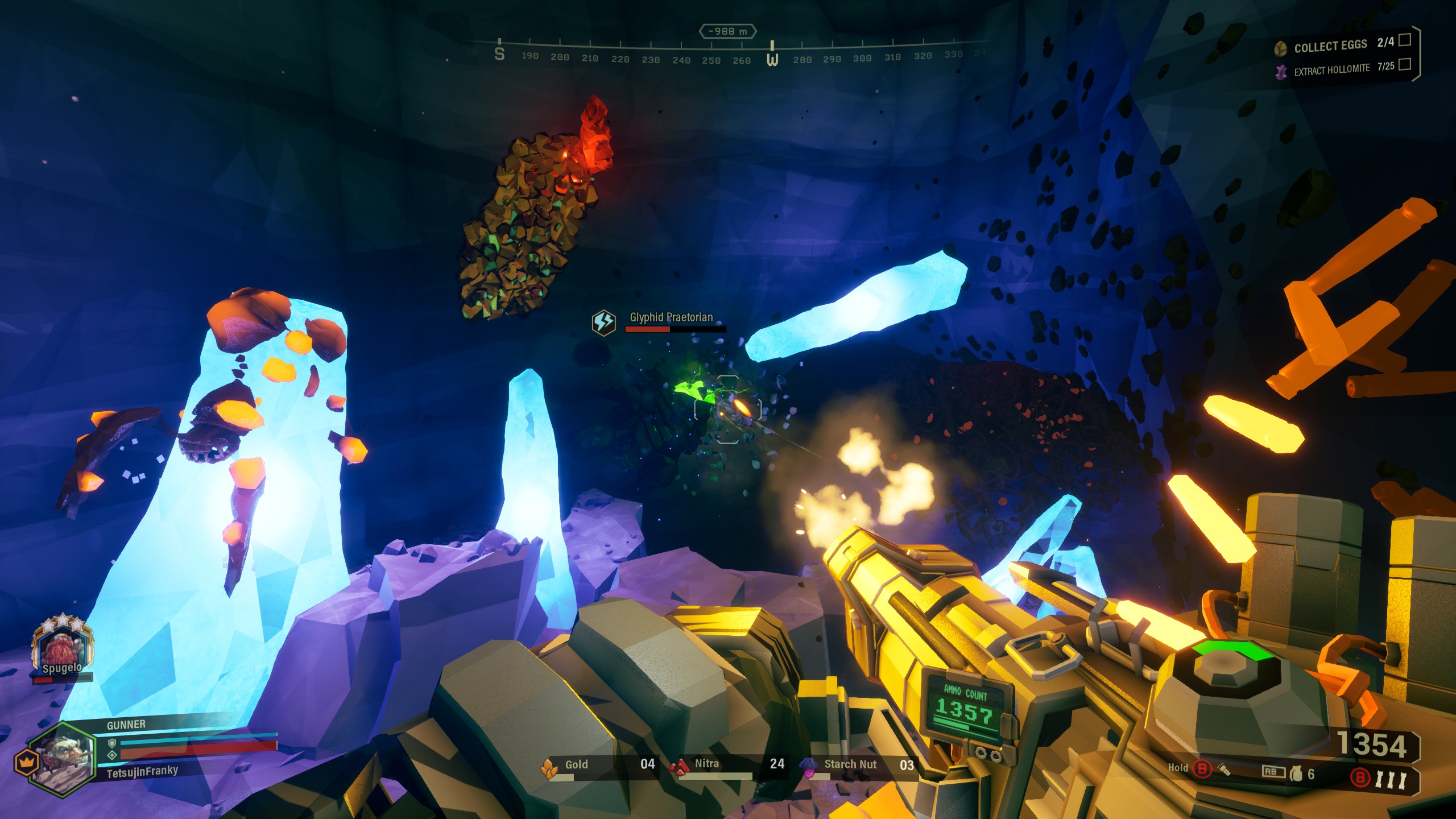 The five different types of missions - Mining Expedition, Egg Hunt, Salvage Operation, Point Extraction, and Elimination - each come with a different objective that requires a different approach. In Mining Expeditions, for example, players must mine a certain amount of Morkite, making teams including Scouts and Drillers more effective. Elimination missions, on the other hand, task players with destroying the powerful Glyphid Dreadnoughts, so teams with Gunners and Engineers will make the job easier. Mission variety is made even better by the nine different biomes, which come with unique hazards and enemies, and by some mission modifiers such as Hazard Level, Cave Complexity, and more. Add in procedurally generated tunnels, random events, and Deep Dives, a set of three missions that spice up the usual mission selection, and you get an experience that does take a long time to get stale. The excellent mission design is supported by very good shooting and movement mechanics as well as great controls to make it simple to switch between weapons and tools, call allies, and move around the tunnels even with a gamepad.

Deep Rock Galactic also features an incredibly deep customization system that is tightly integrated into the whole experience, creating an engaging gameplay loop. At the end of each mission, you will get experience points for the used character, credits, and the resources you have gathered during the mission, even those that were not needed to clear an objective. All of these currencies are used to power up characters and upgrade gear so that it will be possible to handle more difficult missions with more powerful enemies and more complex layouts. Additional customization options and upgrade paths unlock as the characters level up, so the game manages to keep the gameplay loop fresh by constantly unlocking new options and contents. The Perks system provides yet another customization system that is tightly related with the Milestones system, which rewards players with another currency type upon completion of certain challenges like completing a set number of missions, defeating certain enemies and so on, that can be used to unlock special abilities divided into active and passive perks. And, if all this wasn't enough, there are a lot of visual customization options for all the dwarves and all of their equipment.

If there is one issue with the Deep Rock Galactic character progression, is that it definitely feels a bit overwhelming. With so many options available, and different currencies and crafting materials, it is a little difficult to keep track of everything. The game does feature a solid tutorial system that explains everything there is to know in detail, so players aren't left on their own, but they will inevitably feel a little confused at the beginning. 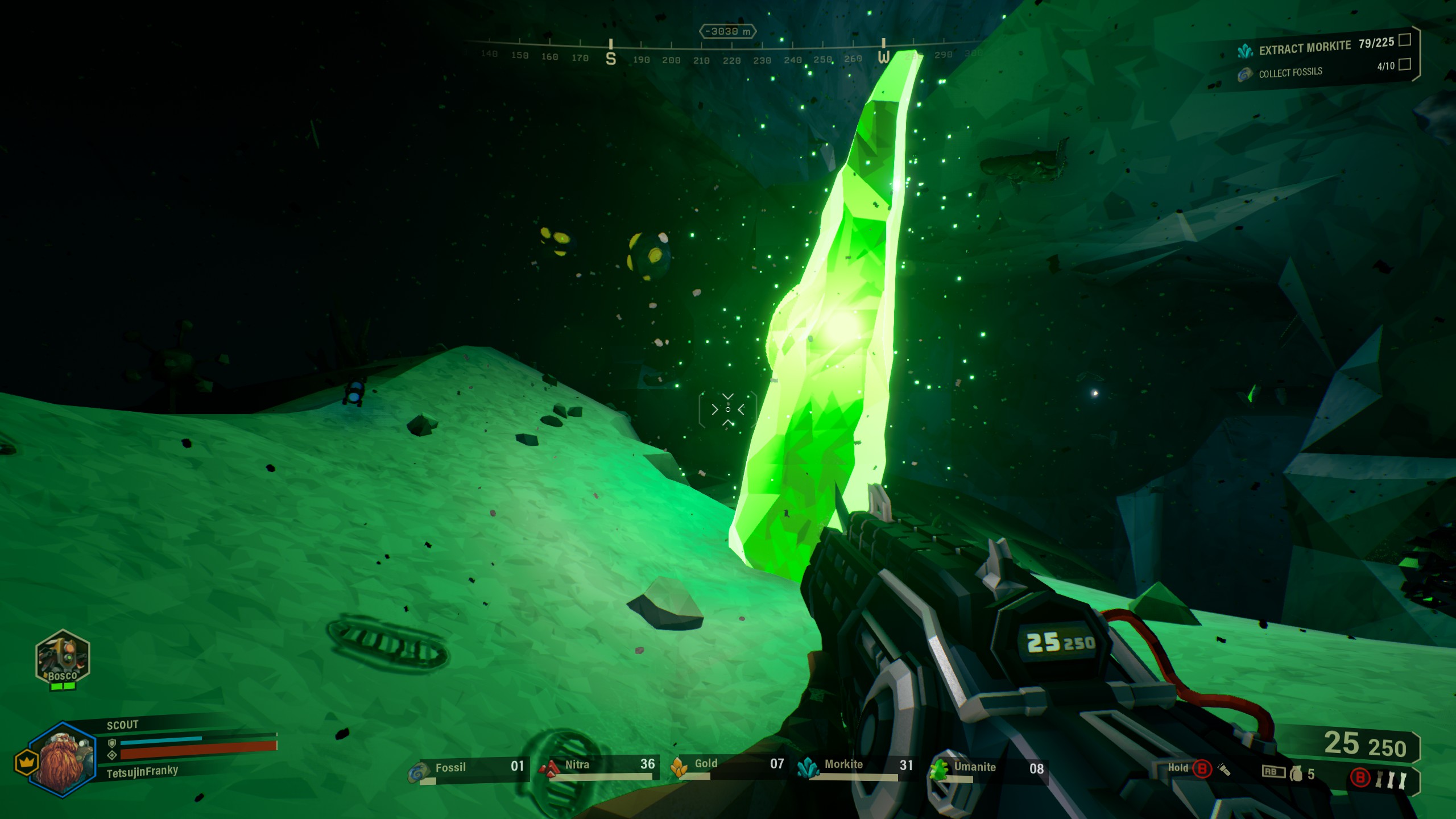 The Deep Rock Galactic experience is clearly focused on co-op, coming with features that make it extremely smooth like a dedicated button to attract attention from your teammates that almost makes voice chat superfluous. Extraction mechanics are also well-thought-out, as only one player needs to reach the escape pod for the mission to be successful, making it possible for players of different skill levels to enjoy themselves without constantly feeling left behind. The game can also be played solo, as players are supported by a customizable drone that supports them both in combat and outside of it, but the experience leaves a lot to be desired this way.

Deep Rock Galactic is an extremely polished experience in pretty much all of its components. The game is definitely not the best looking FPS released in recent times, but it's got great style, and the excellent location design with smart use of lighting highlights the great claustrophobic feel of the deep galactic tunnels, which is further enhanced by a couple of great atmospheric tunes. The game is also very well optimized, running flawlessly at 4K resolution and 60 FPS on a machine featuring an i7-3770 CPU, GTX 980 Ti GPU and 16 GB RAM.

Despite an experience that does feel a little overwhelming at the beginning, Deep Rock Galactic is an extremely fun and deep co-op experience that can keep players engaged for a very long time. The game made some great strides since its Early Access release, and I personally cannot wait to see how the team will continue improving an experience that is, already, extremely polished.