Amazon has made no attempts to hide their interest in getting into video game publishing with a number of projects in the works. While it's not the first title to finally ship (that honor goes to The Grand Tour Game developed by Heavy Iron Studios, who just so happened to develop the Spongebob Squarepants title that THQ Nordic is rehydrating), Crucible is the first competitive shooter to launch into a space filled with game modes that have a stronghold on SEO tactics and shooters with equally diverse rosters of heroes. Crucible is free-to-play and available now, but is it worth the time and bandwidth to install? 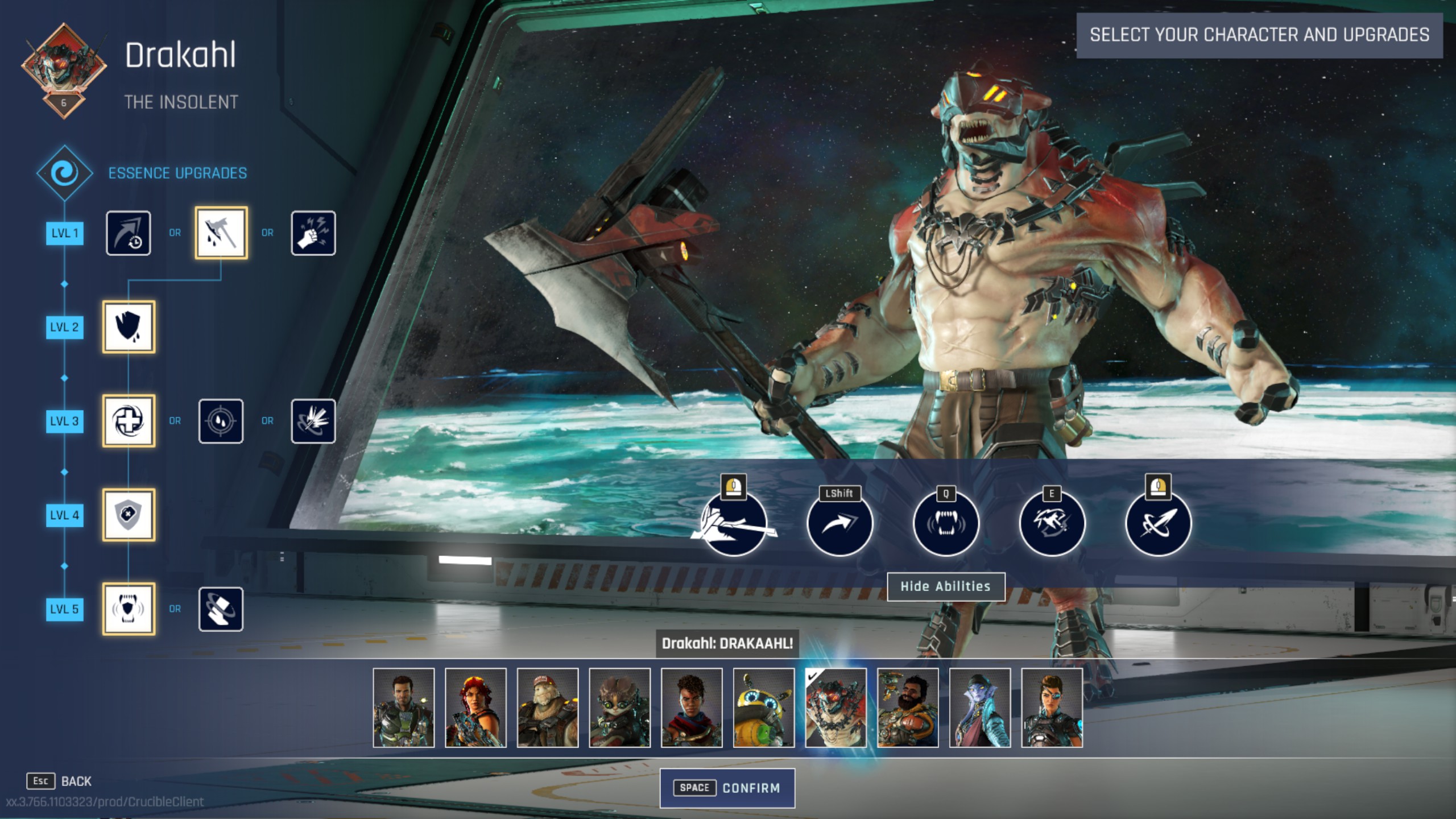 Let's start with what Crucible is: it's a hero-based third-person shooter with a cast of ten distinctly different heroes that play so differently from one another that I found them to be the best part of the experience. Each character in the rogues gallery hails from a different segment of the ingame universe and while there are humans in the roster, they're equally matched by intergalactic types and robots. There's but one basic white male in the whole cast and he's so much of a stereotype that he's practically a caricature of Sam Gideon.

The remaining characters in Crucible's roster are as diverse in species as they are in weaponry. Only half of the cast wield what one would consider a conventional gun; the others use flamethrowers, vibron axes and laser gauntlets. There's a bigger emphasis on close quarters combat than I expected going into Crucible, but I found that the single map to play on was often simply not fun to run around with a slower tank type like Rahi & Brother that take minutes to get from one of the dropship points adorning the edge of the map to the center location. Multiple characters like Captain Mendoza have proper mobility options like an actual dash, but some other heroes are both figuratively and literally left in the dust because of their movement abilities. 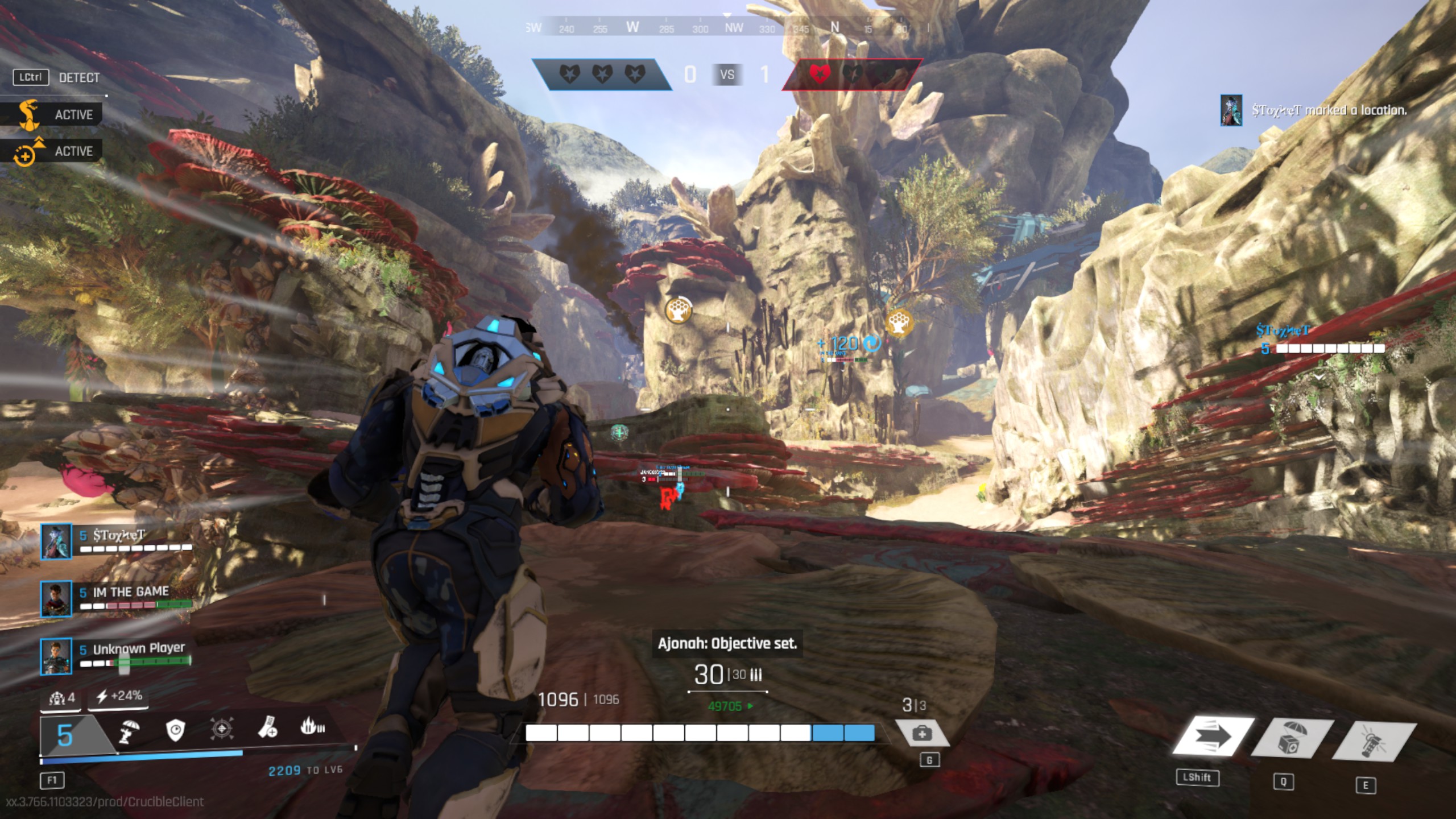 Crucible's gunplay, while unique, feels weak in terms of presentation. Characters with assault rifles and conventional guns have little impact to their weapons and the audio simply felt just as weak as the bullets hitting their mark. The harpoon gun wielding merfolk that functions as an analogue to Overwatch's Widowmaker just felt underpowered even when lining up critical hits and headshots from a safe vantage. It was the melee classes that felt better tuned, especially when facing up against other characters that aren't well equipped to take a beating. 1v1 encounters rarely feel balanced in Crucible and the firefights to control a harvester or capture a hive heart feel best as skirmishes when the whole team comes out to play. Now coordinating your team to move on the same objective in a game without great communication options, that can be really frustrating.

Matches in Crucible are played out with the leveling system that MOBA players should be instantly familiar with. Prior to starting a match of Crucible, you'll pick the tech tree for your character's five levels of upgrades. The first, third, and fifth upgrades for a given character will often grant one of two or three different upgrades to choose from, each radically changing how the character plays. For Captain Mendoza, this means choosing between having faster rifle shots, swapping one grenade for three smaller ones, or my personal favorite for Heart of the Hive, equipping his supply drop with an autonomous sentry gun. With this being selected prior to jumping in a game, there's no having to jump through menus or pull away from the action to engage in a brief buying phase to get your next perk. Experience is granted by gathering Essence, the single resource to the game of Crucible. This is earned by killing the fodder creep units around the map, taking out enemy players, or generated at a steady pace by controlling harvester points throughout the map. As you level up, so too does your team, so taking the time to hunt around the map for spawning packs of fodder can help turn the tide of battle. 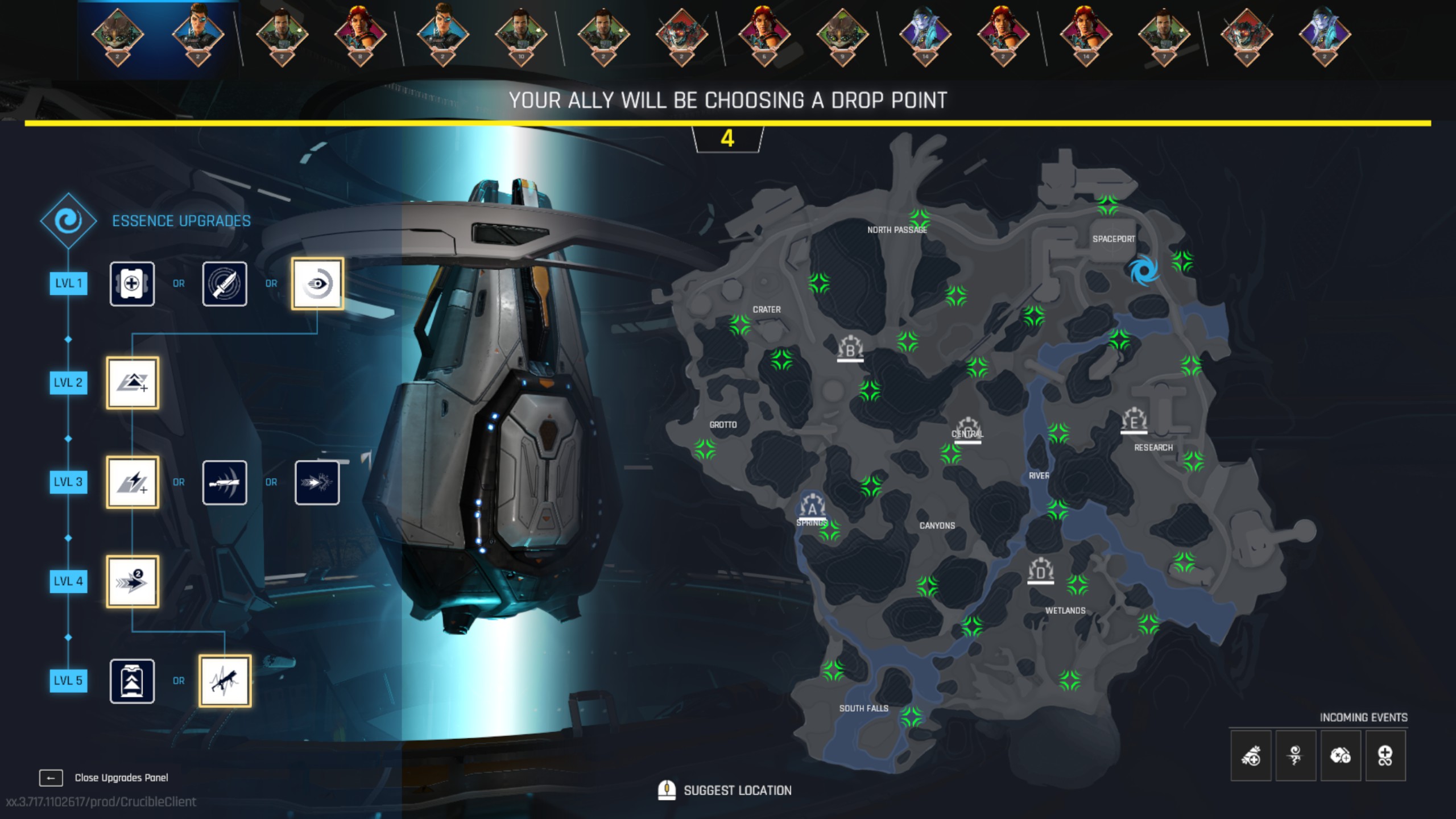 Crucible offers three modes that all take place on the same map, each with twists on familiar modes from other shooters on the market. The main mode that Crucible pushes is Heart of the Hive, a 4v4 mode that's about capturing exactly what the name says on the box: destroying a hive down and capturing the heart within; the first team to capture three out of five wins the match. There's a slight PvPvE element at play here as the hives have a number of flying defenders that make it difficult for just one player to capture a hive alone. Alpha Hunters, the battle royale mode, drops eight teams of two into the map. No loot, no overpowered weapons to pick up, just the regular essence and medkits that help grow your hero in level. The third mode is Harvester Command which pits two teams of eight to control a number of harvesters with points going to the team that controls the majority. It feels like Battlefield's Conquest mode, with the added perk of the points you control leveling up your hero at a faster rate. With a max player cap of sixteen across the large map, there's going to be a lot of pockets where there's no action going on and a long run just to find another player at times.

If Crucible went away from the needlessly oversized MOBA map into smaller skirmishes ala Overwatch, I could see the characters being far more appealing to use. The twenty-to-thirty second wait to respawn combined with the long and uneventful run back from your dropship back to the landing immediately ruins any sort of momentum or hype in a match. Ground control abilities such as smoke screens and flaming grenades lose their effectiveness in a large map when players can merely walk around them to reach the same objective. A traditional 16-player sized shooter map would be right at home with Crucible's roster of champions, so why the need for a map filled with empty space and little to no points of interest? 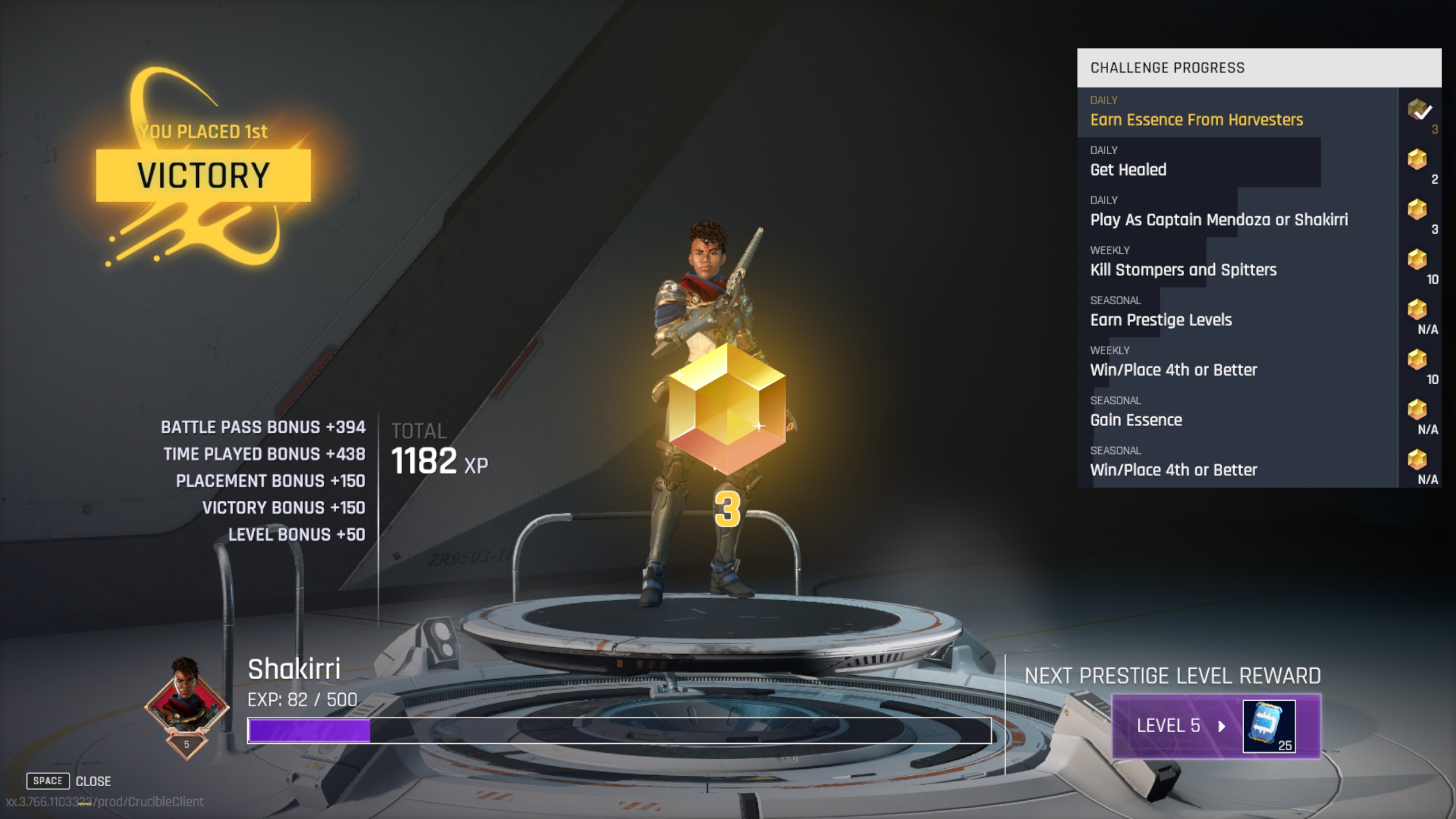 What Crucible needs most of all if they're going to push the team-based gameplay is a proper form of communication. The only voices you're going to hear mid-match are going to be the random chatter of your selected hunter or whatever voice lines a player won from the battle pass and happen to be spamming at that point in time. No voice chat, no text chat, nothing more than a half-baked pinging system that often fails its basic execution. Take Apex Legends as an example. Even if that particular game didn't feature voice chat, the pinging system is intuitive enough to give dynamically change between tagging loot and locations in addition to having a context wheel to make if you think someone's recently been in the area.

Crucible, on the other hand, has the most rudimentary of pinging systems that regularly can't decide what it wants to convey. Medkits seem to be the most reliable spot but trying to make an enemy is often met with pings off the closest wall or piece of architecture and announcing a location. It often takes two or three times to accurately mark an enemy for your team mid-match. At any time, you can bring up the fullscreen map (remember, Crucible doesn't offer a minimap) and tag a spot with the middle mouse button. Again, this has the same issue of being unreliable for targetting enemies. The system so far seems like tapping once leaves a blue marker for a location and tapping twice should drop a red marker to indicate enemy contact but in actual use, I usually wind up spamming the area with blue pings and just giving up out of frustration. That isn't including the times when pulling up the map simply doesn't show any players or points of interest.  The battle royale Alpha Hunters mode has a simple system for initiating cease-fires with other teams when the odds aren't in their favor but most players I came across would sooner blast me in the face with Tosca's scattershot than team up temporarily. 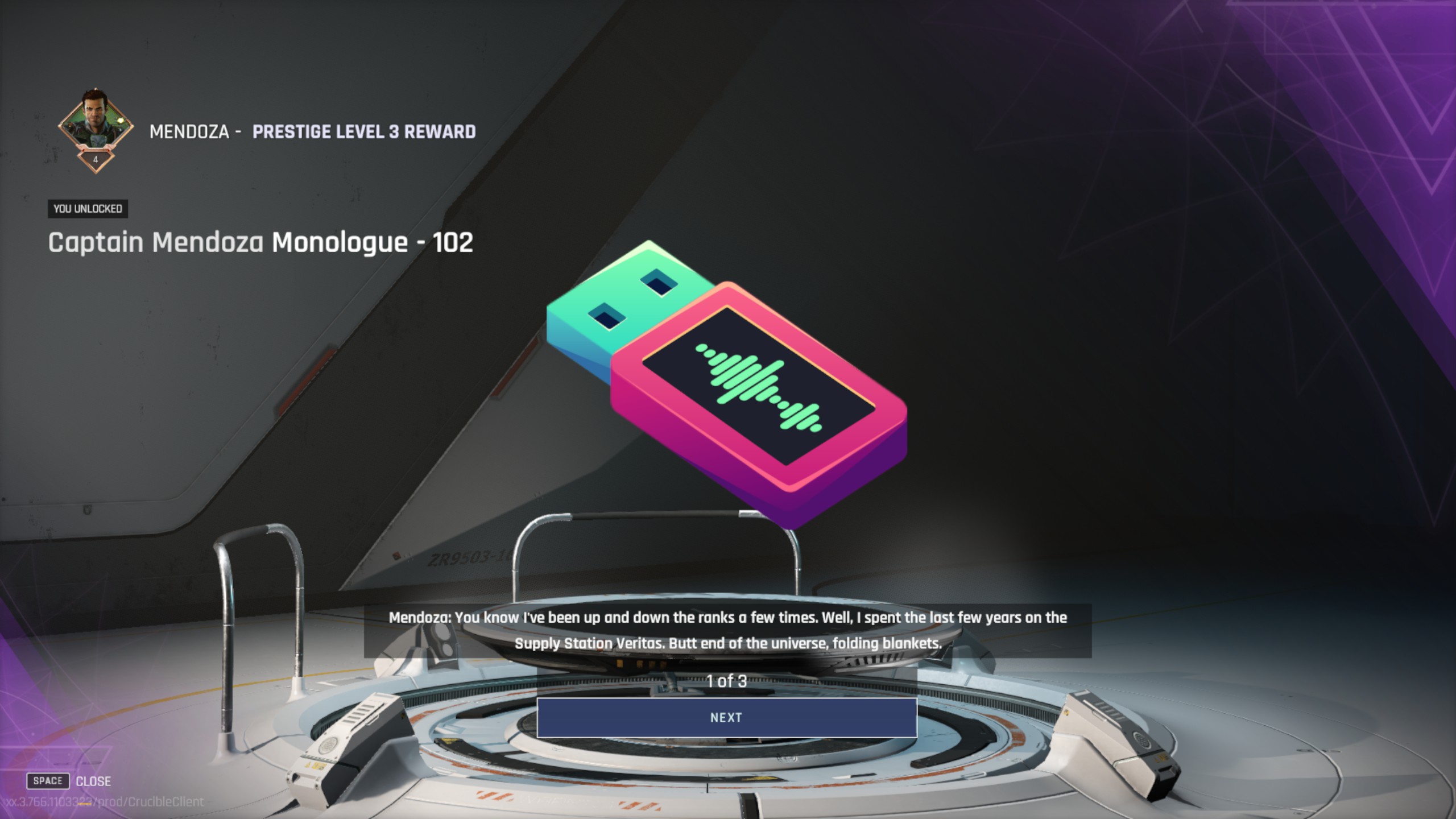 I wish I could say that I liked Crucible overall, but it's almost exclusively the characters that I found to be appealing. When the map, the audio, and even the combat all work against the player, it's tough to find any one thing that I can recommend to someone interested in picking up Crucible if not for the characters themselves. Crucible might not be the most exciting launch of 2020 but Relentless Studios has some work ahead of themselves to get the game into a shape where players will want to pick Crucible over the myriad of other hero shooters and MOBAs (though not necessarily combined). They already have the framework in place with some interesting heroes, so we'll see if Crucible can evolve in the coming months.

Crucible in its current form feels uninspired in a lot of ways. While the heroes themselves would fit great into smaller arena matches, throwing sixteen players into an oversized MOBA map sours what makes Crucible unique among other hero shooters.