Pretty much every platforming star worth their salt ends behind the wheel eventually, but not every kart racer is created equal. Mario’s obviously had his memorable outings, but Crash Bandicoot is no racing slouch either. In fact, 1998’s Crash Team Racing has become a bit of a cult favorite over the past two decades, with devotees lauding it for being faster, harder, and more skill-based than your average kart racer.

Needless to say, there was a whole lot of excitement around certain corners of the internet when Crash Team Racing Nitro-Fueled was announced by Activision. But does Crash Team Racing still live up to its sterling reputation? Does this remaster really do the game justice? Or is Nitro-Fueled a pretty, polished blowout? Time to take this classic for a test drive…

Crash Team Racing Nitro-Fueled adheres to the standard rules of mascot racers – blast around in a dangerously souped-up go-kart, grab collectibles (Wumpa Fruit in this case) to go faster, and smoke opponents with weapons grabbed from boxes strewn around the course. The game’s controls are responsive and the action is satisfyingly speedy, particularly once you master the game’s boost system.

Said boost mechanics are what really sets Crash Team Racing apart from the pack. In most mascot racers like Mario Kart, maintaining a lengthy drift increases the power of the boost you get at the end of it, but in Crash Team Racing, you can hit multiple boosts (up to three) throughout the slide if you have good enough timing. If a player really knows their stuff, they can chain multiple powerslides together, allowing for pretty much continual boosting. Moreover, if you start a new powerslide/string of boosts before the current one has burnt out, your unused boost is kept in an invisible reserve tank, allowing you to build up crazy extended boosts that can potentially carry you all the way around the track at top speeds. And really, that’s just the tip of the iceberg when it comes to high-level CTR techniques.

If this all sounds a little complex for a game about go-kart-racing marsupials, well, it is. Crash Team Racing provides a much longer path to mastery than your typical kart racer, which is what some folks like about the game. Unfortunately, it comes at the cost of accessibility – if you’re expecting a low-stress cruise to victory, prepare to get your ass kicked. Some newcomers and casual racing fans may be a bit put off by CTR’s demands.

Much like its contemporary Diddy Kong Racing, Crash Team Racing included an Adventure Mode featuring an interconnected hub world and boss races, which is completely recreated in Nitro-Fueled. Adventure Mode was a novel idea back in the late 90s, but it’s not terribly impressive today. Honestly, I’d prefer a simple menu layout, if only to escape the constant annoying tutorials from Aku Aku. As for the tracks contained within Adventure mode, they mostly hold up. They don’t quite measure up to Mario Kart 8’s gravity-defying spectacles or even some of the courses found in recent Sonic racing games, but they’re nicely varied and well laid out for maximum boost-spamming craziness.

CTR’s lineup of weapons and items is fine, but a little too focused on defense for my tastes. Getting five or six power shields or explosive crates in a row when all you want is a damn tracking missile can be exceptionally annoying. Really, no non-Mario kart racer has ever been able to replicate the visceral thrill you get when you blast an unsuspecting opponent with a red shell.

But hey, it’s easy to overlook Crash Team Racing’s occasional shortcomings given how gorgeous the game has become. Developer Beenox has done a great job infusing every track with new life and atmosphere. Some favorites include the moody rain-soaked Tiger Temple, rustic, dusty Dingo Canyon, and glittering Dragon Mines (which now has actual dragons in it!) The downside of all this visual splendor is that Nitro-Fueled runs at a locked 30fps on all platforms. Granted, the original CTR also ran at 30fps, but an upgrade would have been nice. Actually, the lush new visuals combined with the middling framerate gives me a touch of motion sickness after a while, which very few racing games do to me.

On paper, Crash Team Racing Nitro-Fueled offers a load of stuff to do. Adventure Mode will take most players a solid 10-or-so hours to get through, and once you're done that, there’s tons of extra stuff to collect, time trials, Battle Mode, and online play. Oh, and every track from 2003’s Crash Nitro Kart has also been stuffed in! Unfortunately, while the core content from the original Crash Team Racing is quality, a lot of the extras surrounding it aren’t that thrilling.

The Nitro Kart tracks are every bit as pretty as the ones from the original CTR, but they’re an obvious step down in terms of layout and design. Online play is functional, but bare bones, with simple matchmaking and no progression system (Update: the latest Nitro-Fueled patch added basic online leaderboards, but they reset after the current Grand Prix season is over and don't have any effect on matchmaking). Collecting new racers, karts, and other content is a chore, as the way you unlock stuff feels designed to push microtransactions, although there’s none in the game. Which begs the question, why is all the grinding for cosmetics included at all? Can Activision no longer conceive of a game without this stuff? Crash Team Racing Nitro-Fueled is that beautiful vintage ride that’s great for short joyrides, but maybe not a long road trip.

This review was based on a PS4 copy of Crash Team Racing Nitro-Fueled provided by publisher Activision. 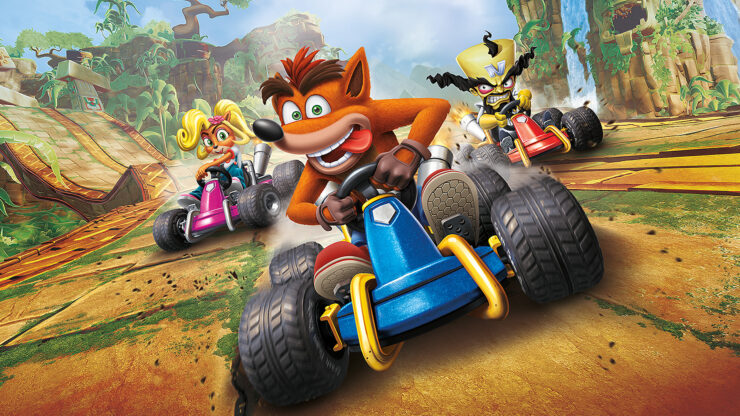 Crash Team Racing Nitro-Fueled doesn’t break any new ground, but the 20-year-old game at the heart of the package holds up well and Beenox has done a commendable job of updating it for the 21st century. Unfortunately, most of the extras that have been added, including Crash Nitro Kart tracks and the usual pile of unlockable cosmetics, aren’t terribly inspired, making Nitro-Fueled feel less essential than other recent Activision remakes. Hardcore CTR fans and those looking for a surprisingly-stiff challenge should give Nitro-Fueled a shot, but others might find it runs out of gas surprisingly quick.