Castlevania Requiem: Symphony of the Night & Rondo of Blood

Halloween 2018 is nearly upon us. As the ghouls and zombies slowly make their way out of the woodwork, it’s certainly becoming the season for monsters to roam free. A new Castlevania anime is about to debut on Netflix and Konami, not known to waste the opportunity to release a new game in tandem, has created a PlayStation 4-exclusive collection of two of the greatest games in the Castlevania timeline. Castlevania Requiem: Symphony of the Night & Rondo of Blood makes it quite obvious what games you’ll get in this collection, but what else has Konami included?

For starters, really nothing else. Castlevania Requiem features a bafflingly poor wrapper for the two-game package that just screams ‘sophomore year art project’. You’ll be tempted with the gentle sounds of falling rain rather than any sort of iconic Michiru Yamane music as you load up Castlevania Requiem for the first time and menus that don’t come close to matching the quality of their respective games. Even the menu where players can choose between the two included titles appears to be stripped out of the PSP-exclusive Dracula X Chronicles. That’s not too surprising, given that Symphony of the Night is clearly based upon the PSP version. Perhaps most baffling of all is the internal decision to take two-thirds of the DxC release and not include the main game in this small collection.

Up until the release of Symphony of the Night, Castlevania was primarily a much slower paced and more methodical style of platformer. Your vampire hunter of choice could dish out plenty of punishment with their Vampire Killer whip and array of subweapons but certainly couldn’t take it. It often only takes a few hits to lose all of your life in a Castlevania and then it’s back to either the last checkpoint, beginning of the stage, or in some cases, back to the adventure’s beginning. This mantra still holds true in Richter Belmont’s greatest adventure, Rondo of Blood, although being able to save your progress and only have to begin from the start of a stage when you lose all of your extra lives is a nice compromise.

Castlevania Requiem: Symphony of the Night, on the other hand, is a much faster type of platformer, fusing that monster hunting action with a unique hybrid between Metroid’s exploration map and a leveling system that sees Alucard grow in power and use far more than just a signature whip in attack. Even after two decades of exploring every nook and cranny of Dracula’s castle, the number of secrets hidden within still continues to surprise me. A full 200.6% clear of Symphony of the Night averages around a dozen hours, but expect to spend much longer if you don’t know where all of the breakable walls lie or just what the Gold and Silver Rings are supposed to mean.

The PSP version of Castlevania: Symphony of the Night that makes up half of Castlevania Requiem has a few strengths over that of the PS1 release. Some items have been shifted around in a rebalancing effort, while two new familiars give Alucard some new companions to play around with (the Nose Demon and Faerie that can sing a song if Alucard takes a load off in one of the chairs littered around Dracula’s Castle). Unfortunately, this also means that a very infamous glitch with the Sword familiar and duplicating saleable gems have also been patched out. Sorry, but if you want to earn the trophy for dropping 500,000 gold on a Duplicator, you’re going to have to farm the old-fashioned way.

Fans of the iconic dialogue that once illuminated the exchange between Richter and Dracula and became a meme for the ages will be disappointed to learn that such banter has not returned for the PlayStation 4 release of Symphony of the Night. That means once again, players will be subjected to Yuri Lowenthal’s mediocre performance as Alucard rather than the memorable performance by Robert Belgrade. Not to say that the PS1 rendition of Alucard was great in its own right, but it was something that stuck with you years after playing the game. On the bright side, Castlevania Requiem features the Japanese dub for the first time overseas, meaning players can finally get to experience Norio Wakamoto’s Dracula in all its glory.

Both Castlevania: Rondo of Blood and Symphony of the Night still hold up as pinnacles of their respective sidescrolling genres. Richter and Maria’s adventures in Rondo of Blood are still hard as Dracula’s nails where death can come in only a few quick hits. Branching paths, secret rooms, and plenty of turkeys plastered inside castle walls all give players a reason to keep returning to Dracula’s castle and explore once more. For many gamers, this port of Rondo of Blood might be their first experience with this timeless classic if they didn’t own a PSP or Wii in the past decade. Symphony of the Night remains the star of this collection, being the amazing adventure that coined the ‘Metroidvania’ term and created an all-new genre by infusing an RPG system into that of Super Metroid’s non-linear progression.

Two decades have not been kind to the beautiful pixel art that once brought Dracula’s castle to life. Character portraits and the frequent splashes of blood both have lost their luster once played on a larger screen meant for HD content. Konami’s solution to this is the inclusion of a few basic filters: scanlines, smoothing, and interlacing. Each tries to solve the problem of low fidelity in their own way, but please for the love of God, don’t use the Interlace option. Even a few brief seconds of this 60Hz flickering was enough to give me a headache and I can only fear what may happen to those with worse constitutions than mine. The remaining two options offer an alright compromise between crispness and fidelity. Neither options are amazing, but I am grateful that Konami included them for the sake of being a tiny bit more than a straight PSP port. No matter what options you go with, there isn’t an option to completely stretch out the image, so you’ll always be left with at least some form of letterboxing regardless of whether or not you toggle off the various wallpapers surrounding the play screen.

The inclusion of a platinum trophy in Castlevania Requiem is a great addition and reason for trophy hunters to pick up this collection. Beyond the typical trophies for beating bosses and completing each respective game, there are a number of trophies that encourage players to adventure out and do some exploring on their own. If it weren’t for a trophy to do so, I never would’ve noticed the extra work someone put into the Outer Wall for a family of birds that slowly grow up every time you enter the room. The trophy names themselves are dated meme references, but since they’re not actually changing anything about the two games themselves, I’m willing to let a reference to Tommy Wiseau’s The Room pass.

Yes, it’s strange getting two-thirds of a PSP collection and not getting the main title that these marvels originated from (Dracula X Chronicles). However, the price of entry should be enticing for anyone wanting to explore Dracula’s castle this Halloween. At $10/game (and less than that if you preordered on the PS store), Castlevania Requiem is still a solid collection worth picking up whether it’s your first or your fourth time playing through Symphony of the Night. The outer packaging might not be great but it’s the content inside that counts.

Reviewed on PlayStation 4 Pro (code provided by the publisher). You can purchase the game on the PlayStation Store. 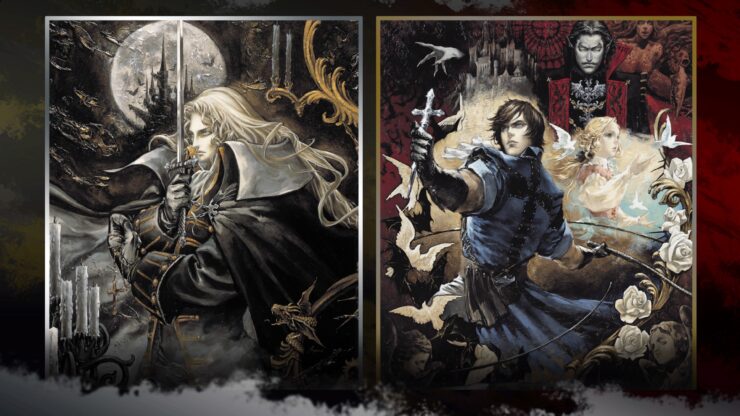 While you won't find any additional features like Saturn-exclusive content, art galleries, or even a main menu with music, what you will get in Castlevania Requiem is a double pack of Konami's best vampire hunting adventures at a budget price.