Call of Duty: Modern Warfare Remastered Review – Back to Basics

It’s fair to say that if you look at the gameplay of Call of Duty 4 today, it’s not quite what you remember. The detailed grassland of Ghillies In The Mist looks distinctly barren by today’s standards, as does the rest of the game, and Call of Duty: Modern Warfare Remastered is here to bridge the gap between one of the most memorable games of the last decade and modern graphics – but does it de justice, and does the game hold up?

To start with, the presentation is beautiful. Textures are overhauled across the board, and faces of characters look more human than ever. Geometry has been updated where it matters, and backdrops and skyboxes look incredible. More than all of that, though, it’s the small effects that make a big difference. Explosions look like they burn hotter than ever, and the subtle reflections found in places like puddles and the lens on your scope make the world feel very real, almost tangible.

So graphically Modern Warfare Remastered looks every bit as new as other AAA titles released this year, but where does the gameplay stand? Well actually, the moment-to-moment gameplay in the campaign felt like an unusual breath of fresh air, rather than a dose of nostalgia. Everything in Modern Warfare’s campaign is succinct to the point, and more coherent than I remember.

Captain Price is having issues Ultranationalist extremists, with one Zakhaev being the prime perpetrator, while American troops move in to stabilize a region thrown into chaos after one of Zakhaev’s pawns kills a politician on live TV. The story all ties together so neatly, and each mission is clear on why you’re doing it, where you’re going, what the end goal is. This, in comparison to many modern shooters, just feels so tight. No superfluous extras – aside from gathering the laptops with enemy intel – just the mission at hand, and the moment to moment gameplay. It has excellent pacing, unlike Infinite Warfare’s long stretches of boring dialogue, Modern Warfare keeps chatter to a minimum, unless they’re discussing the mission at hand. 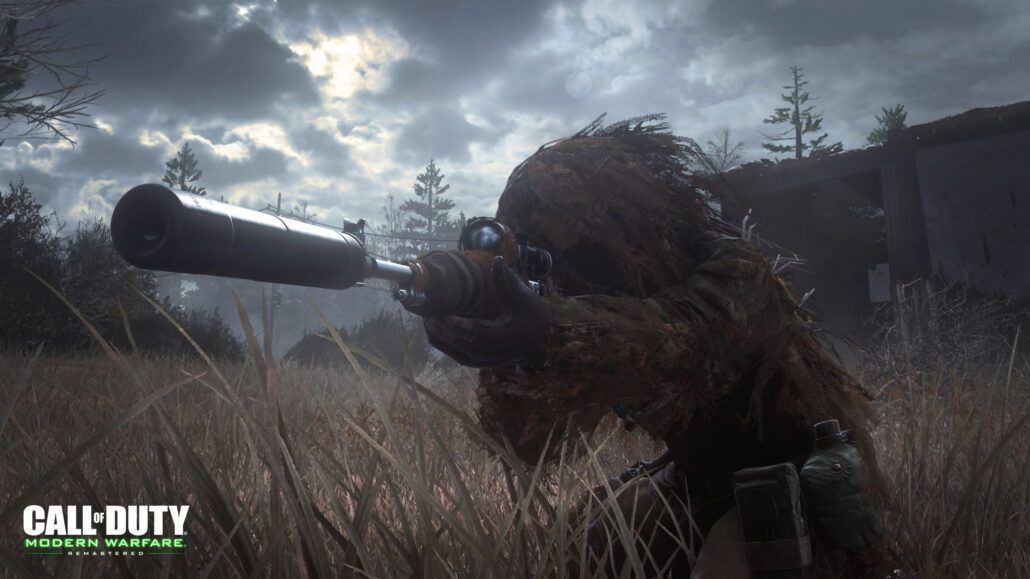 It’s hard to overstate how tight and clean the entire campaign feels – sure, “shocks” like the [MILD CAMPAIGN SPOILERS] nuke going off or the missiles being launched lose their shock value, but the story being told here is easier to follow and more interesting than anything from any other shooter I’ve played through in a while – and the physics on the broken bridge at the end of the campaign really made me feel like the whole thing was going to crumble beneath my feet in a way that I’ve never experienced before – it just felt and looked too real.

Which brings us to the multiplayer, and throughout my time with it the word that keeps coming to mind is “pure”. Modern Warfare Remastered's multiplayer feels like a straight-and-simple multiplayer game, with killstreaks and guns. Obvious? Perhaps, but there’s rhyme to my reason. Class creation is obviously here as in the original, but in case you’ve forgotten, things are more barebones than they have been for a long time. For one, only pistols and handguns can be equipped as secondary weapons. Your lethal grenade is always a frag. You can’t edit what killstreaks to use. Small tweaks made since Call of Duty 4 have become standard, and going back to the originator and seeing where everything started is a wild blast. It takes multiplayer shooting back to its roots – no weird specials or super weapons, no nukes, no absurd air support – just guns and grenades. And it feels good.

Modern Warfare Remastered's Maps have aged a bit, mind. You might have fond memories of them, but layouts feel… Mediocre, more often than not. A good selection is here, with another six coming next month, but they just don’t feel as organic as they once did. Though, there are highlights, with Downpour being a particular favorite – though I can’t help but feel nostalgia is influencing my feelings here more than in the campaign.

Everything in the multiplayer is just as you remembered, though – guns ring off familiar sound effects that you’re used to, those alleys for sniping are just as prime as ever, and that spot where you always throw the grenade at the start of the match still has a good chance of killing someone. It’s hard not to love something that simultaneously feels so nostalgic, but unlike other sources of nostalgia, actually holds up today. It’s quite wonderful.

Reviewed on PC. Only available with the Legacy and Digital Deluxe editions of Infinite Warfare.