There is an ancient saying that players will never question their actions when asked to shoot zombies, aliens or Nazis. But then 2016 happened. Since then, games like Wolfenstein have been accosted by the strangest corners of the Internet for daring to add political commentary into a game where you shoot at people indoctrinated by a political ideology. Broken Lines is a game set in an alternate World War II where you don’t shoot at Nazis but strange gasmask zombies with guns.

It’s a very frustrating experience when you first load up Broken Lines. The game recommends that you play through the painfully slow tutorial before launching the campaign but still tries to teach you the same basics during the first mission of the game. But beyond that, Broken Lines is a game so uninterested in telling a story that you honestly have to question why they choose not to have the player simply work their way through the simple squad-based recreation of WWII. Instead, players are shot down over a fictional country somewhere in eastern Europe, with no instructions or real objective. From there, the squad sort of casually wanders into missions and story elements that they seem aggressively indifferent about.

It’s a maddening affair where the game tries to come across as mysterious but it almost always falls flat leaving you feeling unsatisfied, confused, and often bored. Even the characters are uninteresting, following simple archetypes or otherwise stubbornly refusing to react meaningfully to the situation they find themselves in. As the missions progress, they all struggle to have an opinion on what to do, which makes the moments the game asks you to decide on which action to take all the more frustrating as it doesn’t feel like there are any real stakes.

This could all be forgiven though if the game had the kind of patient, tense and satisfying gameplay that it tries to emulate. Squad games like XCOM and Frozen Synapse are distinctive and memorable, forcing you to painstakingly measure each turn, constantly balancing the risk to your soldiers and the potential damage you could deal to the enemy. It is clear that Broken Lines took that formula, but failed to mix in the key ingredients. Having turns play out simultaneously works in Frozen Synapse because the game is crisp and clear. In Broken Lines, it can be hard to work out exactly what is going on thanks to the muddy graphics and hidden information. Shotgun wielders, for instance, wait an inordinate amount of time between shots and telling whether or not they hit the target can be tricky even when they do fire. 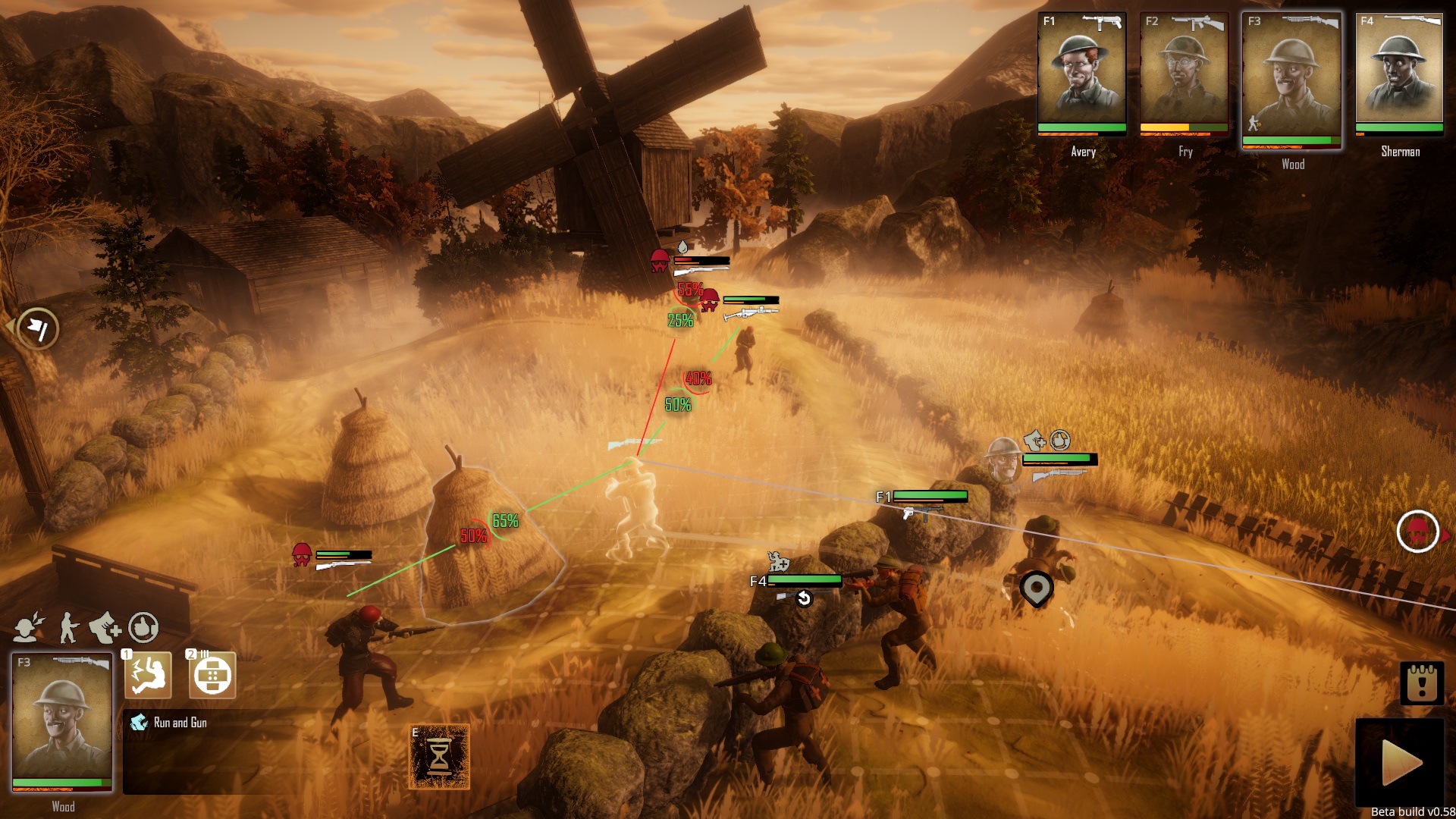 There are two meters you are told to keep track of during any skirmish, the health of the opponent, and their stress. It’s a nice idea that suppressing fire and flanking will make the enemy act more frantically and can be used to lure them into the open to deliver a killing blow, but when you have so much happening and a cover system that only ever seems to be half paying attention, it is often just easier to keep shooting until they’re dead. On the Switch especially, the controls are awkward and it can be difficult to position your troops exactly as you would like, further hampering any notion of real strategy in this strategy game.

And even then, Broken Lines struggles to run effectively under its own weight. Several graphical and gameplay glitches occurred for me in situations with a large number of enemies, making it all the more annoying. Sometimes enemies would fire at you during a cutscene, or they wouldn’t appear during the cutscene leaving you wondering what was happening. Other times your soldiers would be unceremoniously thrown across the battlefield, leaving them vulnerable or otherwise completely removed from the engagement.

There are sparks of enjoyment in this game when you manage to battle against the odds and develop and perform a complex manoeuvre. These are rare, however, and hardly make up for the issues you’ll encounter. It’s obvious the team behind Broken Lines wanted to do something more with their game, but the ideas they tried to fold together just didn’t work. The graphics and music are poor, which makes understanding the battleground more difficult. The overlapping strategy systems don’t work well together and often don’t work at all. And the story is deeply, painfully uninteresting and has that very distinct feeling of being crafted as an afterthought.

If you’re looking for a strategy game, you should probably look elsewhere. Hopefully, in the future, these mistakes can be learned from and the developers can build something more coherent than these broken lines of code and history.

Broken Lines is a game that frustratingly misses nearly every shot it tried to make. While there are moments of fun to be found, they are unfortunately buried in trenches of tedium and disappointment.