Borderlands 3 has finally arrived with a no small amount of baggage in tow. It’s been over seven years since the release of Borderlands 2, and Gearbox Software and its mercurial leader Randy Pitchford haven’t exactly endeared themselves to fans in that time. The run up to launch was particularly fraught, with Epic Game Store exclusivity, confusing messaging about microtransactions, and Randy Pitchford’s ugly public feuding with former Borderlands voice actors (to name just a few of the many controversies) threatening the derail the hype train.

But you know what? I’m not going to focus on all of that here. It’s time to put aside the snark and answer the question – is Borderlands 3 actually fun? Does the formula still hold up after seven years? Or should this one have stayed in the Vault?

Borderlands 3 takes place several years after the events of the previous game. Lilith and the Crimson Raiders are still doing their thing on Pandora, but they’re being muscled out by the Children of the Vault, a new cult led by obnoxious twin livestreamers Tyreen and Troy Calypso. Like seemingly everyone in the Borderlands universe, the Calypso twins are looking to tap into the power of the Vaults, and at the end of the prologue they manage to rob Lilith of a Vault Key map and her Siren powers. Obviously, that won’t stand, so Lilith, the Crimson Raiders, and a new band of Vault Hunters follow the Calypsos to the corporate planet of Promethea, thus beginning a long, rather convoluted adventure.

At first, Borderlands 3 is very much an “And then…” type of story. Some things happen, and then other things happen, without much of an overarching plot to speak of. The Calypsos are bad and want Vault Keys, so you have to get them first. That’s about all you’re given. Thankfully, the story switches into gear about half way through with a rather surprising character death, and continues to deliver a fairly steady flow of big revelations and drama until the credits roll. No doubt, this is the biggest Borderlands story yet. Not everyone’s going to love every twist, but at least Gearbox are swinging for the fences.

Unlike some reviewers, I’m not going to linger on Borderlands 3’s humor. It’s fine. I mean, it’s not actually funny, but it has a certain cheesy dad joke charm. More irritating to me, is the sameyness of so many of the game’s characters. Every dude is a bumbling, egotistical dork, every woman is similarly sarcastic and fed up. Okay, not everyone is the same – Not-so-Tiny-Anymore Tina is still fun, and some new characters like the foul-mouthed teddy bear Balex (voiced by Mr. Ice-T himself) stick out. Ultimately, the most interesting new characters are probably the four new Vault Hunters, who are a lot more vocal than the mostly-silent protagonists of past Borderlands games. Hunters now respond to things in different ways, with each providing a unique perspective on the story.

Aside from being cool characters, the new Vault Hunters are a lot of fun to play as. Your options are Amara, a Siren who can summon ethereal fists to smash enemies and control the battlefield, Zane, a crusty Operative who can summon copies of himself and set traps, Moze, a Gunner in possession of a hulking “Iron Bear” mech, and, my personal favorite, Fl4k, a sardonic Beastmaster robot who charges into battle with one of three different pets. All too often, “unique” classes in RPG and action games tend to be difficult to use, but that’s not the case here. You can jump in as any one of the four new Hunters and immediately understand how they work. Gearbox has done a fantastic job designing these new classes.

Borderlands 3 doesn’t mess with the basic looter shooter blueprint much, but it still works. That twinge of excitement when you kill a boss and they drop something with that telltale orange Legendary glow hasn’t gone away. As always, there are an admirable array of co-op options, with players being able to jump into a local splitscreen session, or invite online friends or randoms into their game at any time. That said, some old irritations also return – your inventory is still ridiculously small and difficult to sort through. I mean, why do these games all about collecting stuff have limited inventories at all?

Running and gunning feels about the same as always, although you can now slide, mantle up onto ledges, and everything is just a touch quicker. That’s good, because Borderlands doesn’t really reward playing peekaboo behind chest high walls – it’s about moving fast and killing faster. Most weapons don’t have a ton of punch, but Gearbox does a great job of somehow making almost everything you pick up feel unique (an impressive feat considering the game’s billion-plus gun possibilities). Over-the-top wackiness like guns that can run around on little legs or spawn brain turrets aside, most of Borderlands 3’s weapons aren’t that different than ones you might have picked up in the past, which is fine. Borderlands 2 pushed the randomly-generated gun concept to its breaking point, so the fact that Gearbox has come up with any new ideas at all is impressive.

Unfortunately, while Borderlands 3’s core action and loot collecting is more engaging than ever, the game has some issues with level design. As mentioned, you can now visit multiple planets, including the Blade-Runner-esque Prometheus, tranquil Tibetan-like Athenas, swampy Eden-6, and more (there are five full worlds in total). The new planets do provide some visual variety, which is nice, as Borderlands 3 doesn’t look radically better than Borderlands 2 otherwise, but in terms of design and layout they all feel a bit samey. Only Pandora still feels like a proper open-world environment, with the other planets basically being a series of long, very linear dungeons. You run down an empty narrow corridor until you come to a more open area, kill the enemies there, collect your ammo and loot, then head down the next narrow corridor. Rinse and repeat until you get to the boss. There’s always been a certain amount of repetitiveness baked into Borderlands, but the layout of the new worlds really emphasizes it.

Navigating multiple fragmented worlds can also be a bit of a pain. Many areas only have a single fast-travel point right where you come in, so often you’ll spend 30 or 40 minutes playing through a long gauntlet, only to run up against a boss you can’t beat in your current state (Borderlands 3’s bosses are pretty unbalanced in general). If you want to go level up by playing some side quests, you have to leave the area, which means the enemies respawn and you’ll have to grind through the stage all over again. Vending machines are also usually only placed at the start of stages, so even just buying some new weapons or ammo requires a reset of the area. Overall, Borderlands 3’s worlds just feel kind of stitched together.

Mission design is okay, but too many adhere to the familiar “go here, kill everyone, collect trinket” formula. During the main campaign you’ll run across a few unique missions – one where you defend the Atlas Corporation headquarters against a full-on invasion and another that tasks you with chasing down a giant death tank come to mind – but the most unique moments are hidden away in side quests. Ah, but even the best missions are sometimes a chore due to Borderlands 3’s technical issues. I had to restart the game on several occasions because key NPCs got stuck on objects or objectives didn’t trigger. Performance is also inconsistent on PS4, with the action noticeably chugging during hectic fights and boss battles.

Borderlands 3 isn’t perfect, but hey, there sure is a lot of it. Even if you keep your eye on the prize, it will probably take most players around 25 to 30 hours to work through the main story. Double those numbers if you want to clean up all the game’s side quests, and extend them into infinity if you really get into grinding for high-level loot. Hopefully we won't have to wait another seven years for another Borderlands, but if we do, this entry might just keep you busy until then.

This review was based on a PS4 copy of Borderlands 3 provided by publisher 2K Games. You can pick up the game on Amazon. 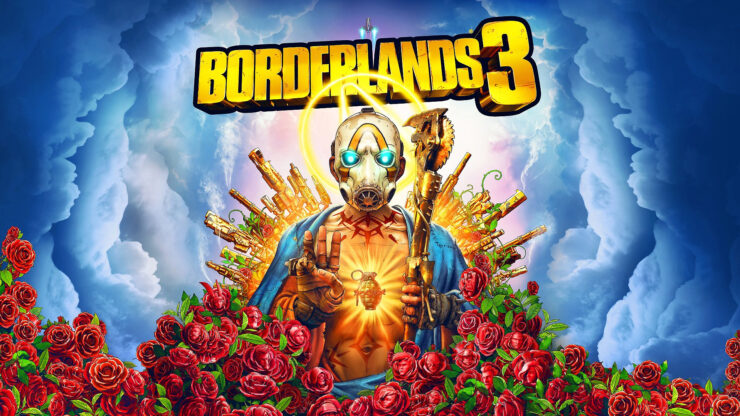 Borderlands 3 is another bountiful, bullet-filled buffet for fans. Hunting for that perfect gun is still addictive and the minute-to-minute action is better than ever, but flat writing, sometimes-frustrating level design, and a lack of polish limits the game’s potential. If you’re starving for more Borderlands, by all means, dig in, but you might find you’ve had your fill sooner than you expected.