If I'm to make a confession, I must say that BlazBlue has always intimidated me. I love fighting games but, frankly, BlazBlue's level of execution and mastery required to pull out some impressive combos is frightening - especially when considering it's a game with a smaller audience, which makes it that much harder to play online. What's the point in spending hours adapting to a game which you will seldom be able to play with real people? Unless you're a tournament regular or have a good group of fighting games fans as friends, it's a tough sell, despite being so gosh darn good.

But with this year's Dragon Ball FighterZ, Arc System Works stepped away from their difficult brand of fighting game and gave us something where new players can just mash one or two buttons to feel good about themselves, while experienced fighting game players still had layers of depth to dive into. It felt like a renaissance for fighting games, and this golden era is continuing with BlazBlue Cross Tag Battle, a shockingly approachable fighter with tons of depth hidden just below the surface. 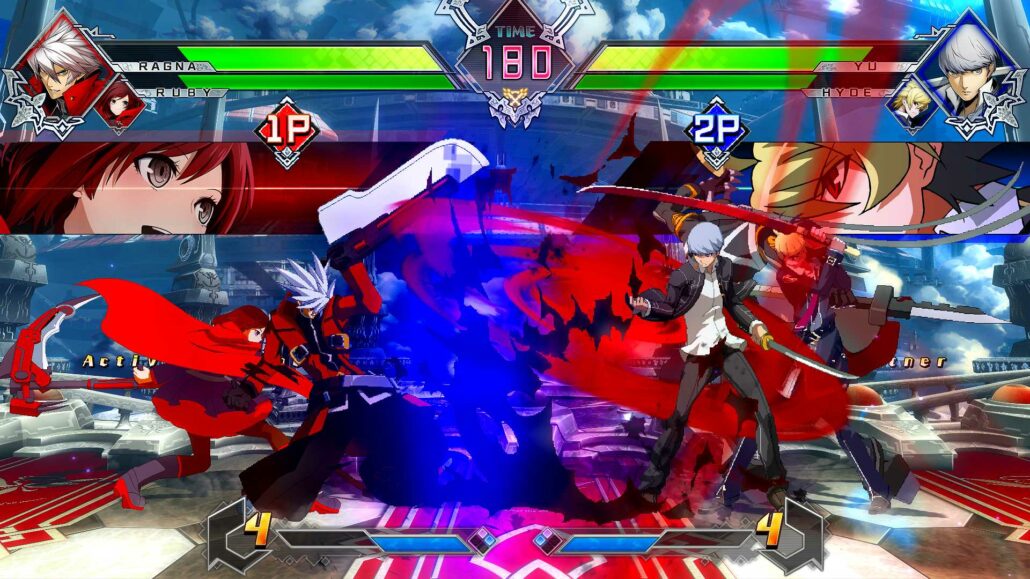 But this isn't just a BlazBlue sequel, in fact, if anything it feels like a series spin-off. Not content with just including their BlazBlue roster, Arc System Works threw in characters from Persona 4 Arena and Under Night In-Birth, two of their other stellar sprite fighters, and even included characters from the popular RWBY series, making it potentially a bigger cross-over fighter than Marvel vs. Capcom: Infinite.

But of course, that does mean that they're hardly original characters. There has already been plenty of controversy surrounding the title up to release regarding the fact that half of the 40 character roster is, in fact, DLC - yikes - in addition to the fact that many of the character sprites and animations have essentially been taken from Arc System Works' other fighters, indicating a minimum amount of effort. It's pretty damning, honestly.

Though, to alleviate those concerns somewhat, it should be said that BlazBlue Cross Tag Battle is not a full price release, and depending on the retailer, can already be found for almost half the price of a full retail release. In addition, the developer has said that the DLC characters will not exceed the price of the base game, meaning you could potentially get the full cast for the price of a full game. Not terrible, but definitely does not ease the sting of playing against DLC characters in story mode, rubbing it in your face that they've already been developed, you just can't use them without an extra payment. 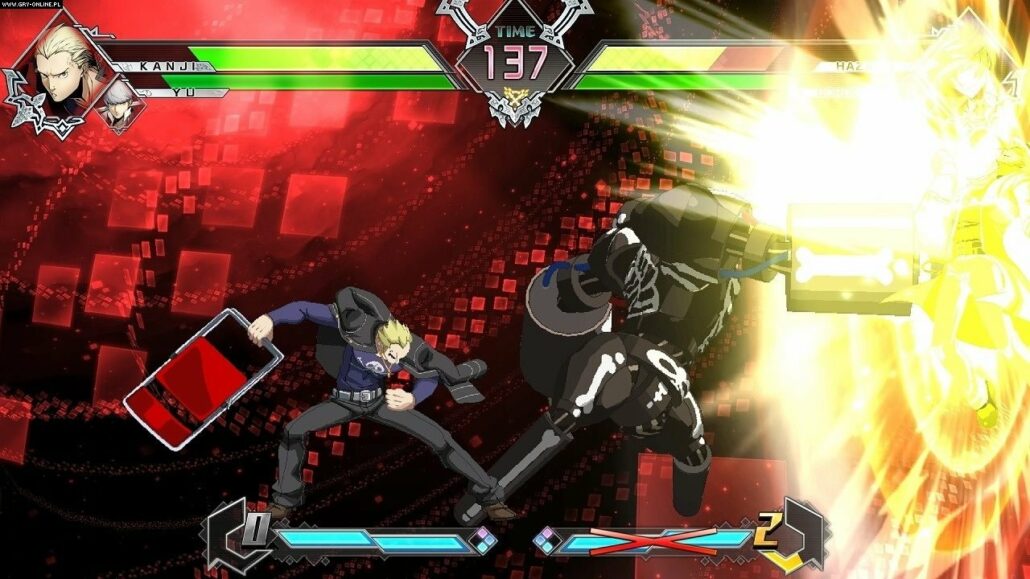 It's this frustration that I felt going into Cross Tag Battle, and it permeated whenever I was reminded of how small that base roster feels. But then, eventually, I learned to enjoy what was here. And you know what? BlazBlue Cross Tag Battle is a great fighting game.

Still a four-button fighter - five if you include your assist button - BlazBlue Cross Tag Battle uses its buttons differently to other games in the series. The first two buttons, A and B, will be your go-to buttons for basically everything. Tapping A will result in auto combos, and tapping B will result in auto combos, with many of the best combos coming from (you guessed it) tapping A for four hits, and then tapping B for a few hits, ending on a special move into super if you've got it in you. At first, it feels like a frustratingly dumbed-down battle system, frankly. You do get to use your C button to attack, but it's mainly used for sweeps, overhead crash moves, or as an EX button for your special moves - not usually one you'll be working into general combos often.

But then with less buttons and combos to worry about across the cast, you can suddenly start focusing on the basics of fighting games more. Spacing, neutral game, mix ups. And then once you've got those down, you'll be focusing on push block, counters, reversals, all things that can feel intimidating in new fighting games feel much more necessary here, but much easier to perform and think about. Then, once all of those come together, you can focus on what's unique to Cross Tag Battle, using your assists to continue some impressive aerial combos and more. 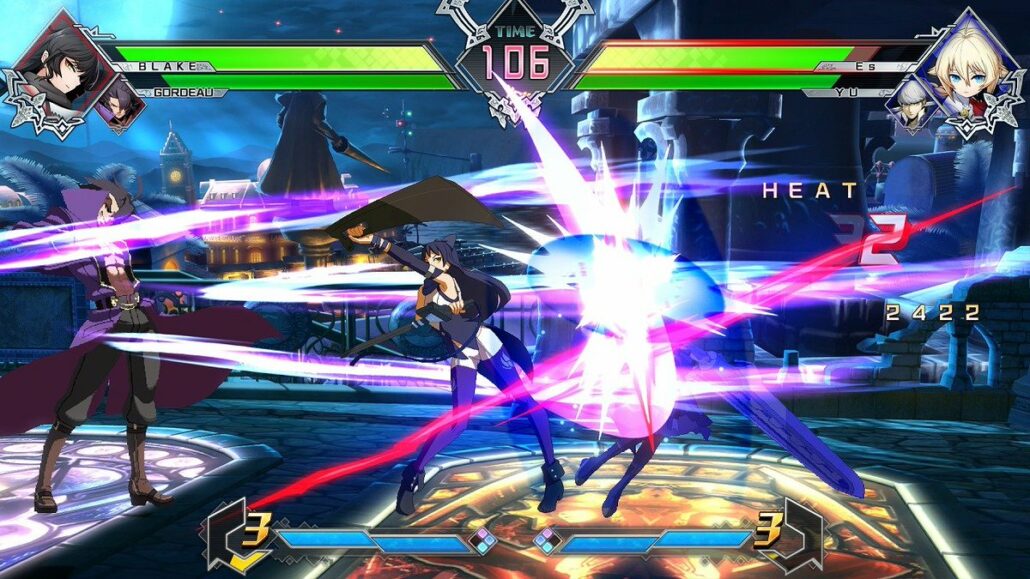 It feels great, it really does. Once I had finally settled into the mechanics of the game, I adored it, and despite my earlier reservations, I actually think I might buy the DLC characters, assuming they release at a reasonable price. Because of the low barrier to entry, my friends who aren't fighting game fans can jump in and attempt to overwhelm me, with combos flying left, right and centre thanks to the auto combos. And sometimes, they even win, forcing me to stop underestimating them and thinking about my spacing and defense more. It's a nice change of pace from something like Tekken or Street Fighter, where the most experienced player will undoubtedly win, though high-level play in tournaments will still be just as exhilarating and tense as ever.

So yes, I definitely recommend BlazBlue Cross Tag Battle, it has great mechanics, a decent yet sparse starting roster, and of course it has great stages and great music, though it's all been taken from other games. Oh yeah, there's Episode Mode too, which gives a brief story explaining why the characters have been brought together, but once it's done, it's done and isn't exactly an essential part of the package, with Tactics Mode and combo challenges feeling more substantial.

This will be divisive though. I can imagine BlazBlue veterans will be put off by the simplified combat, and Arc System Works fans aren't going to be happy with seeing so many familiar sprites and stages, though it does all come together to become a pretty wonderful package, and arguably offers much more value if you haven't played the other Arc System Works titles that it borrows from.

Reviewed on PlayStation 4. You can purchase the game via Amazon.

BlazBlue Cross Tag Battle is a fantastic fighting game, marred by what feels like suspicious DLC practice and very familiar assets. If you can see past that though, you're going to massively enjoy this intense and intuitive anime fighter.