When BenQ decided to send us their brand new HT3550 (known as the W2700 in the EU) 4K HDR projector for review, we weren't expecting a lot of improvement over its predecessor, the HT2550. Then we learned that the HT3550 not only has a more powerful throw ratio but contains a dynamic iris at the same price point and we couldn't wait to get our hands on it. Fast forward a few months and lots of testing later, we realized that we couldn't have been more wrong - the HT3550 is nothing like its predecessor. It is the ultimate home theater projector for the mainstream buyer and this is our review of this incredible product from BenQ.

In typical Wccftech fashion, let's start with the technology at the heart of the HT3550. The projector is powered by the second generation Texas Instruments 0.47" DMD XPR chip which notably solves the light-border problem that was plaguing first-generation chips including the HT2550. For the uninitiated, the XPR chip is able to offer true 4k resolution (this is not 4k enhanced/upscaled) with true resolving power. The chip achieves this by projecting a pixel on a 1920x1080 grid and then shifting it 4 times to the right till a full 4k grid is achieved. Just so I am absolutely clear about this, this is real 4K, unlike 4K enhanced projectors which just project a 1080p native image with 4k support. 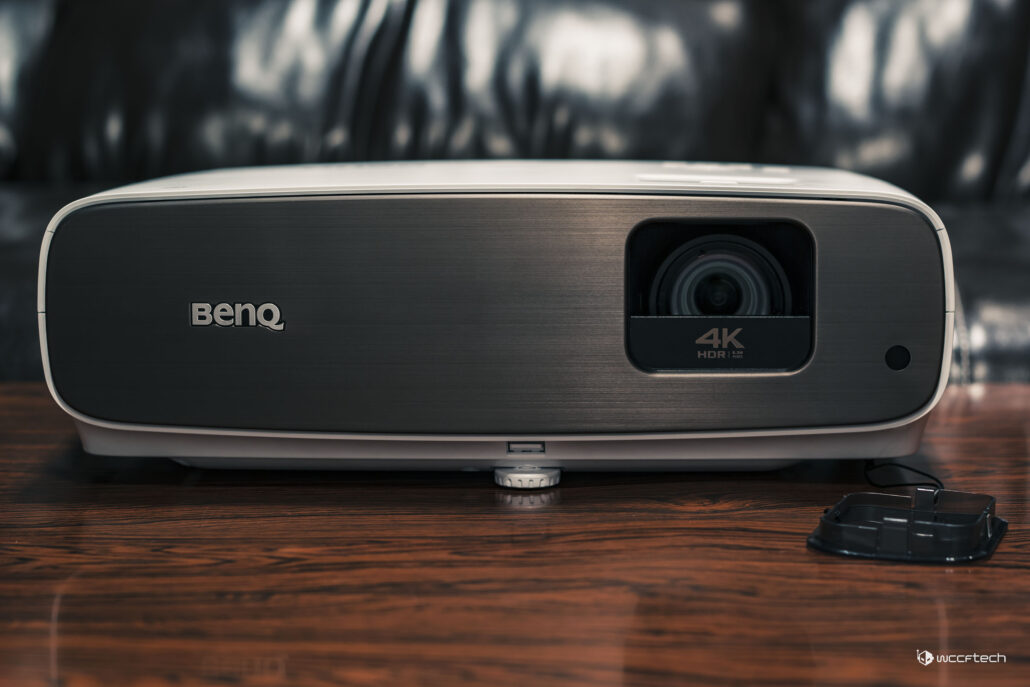 The HT3550 also offers a massive upgrade over first-generation projectors by incorporating a Dynamic Iris. This is a feature which is completely unheard of in budget 4k projectors (compared to Sony's high-end offerings which go over $4000, this is pretty budget indeed) and allows for much deeper blacks than a conventional iris. Apart from this wide color gamut support is added through a color wheel adjustment (you can actually hear the Wide Color Gamut filter sliding into place when you use D. Cinema or User mode with Wide Color Gamut enabled). Full support of 10-bit color and HDR 10 is of course part and parcel of this projector.

3D support was not removed from this projector and that is always lovely to see considering many 4K projectors in this range have dropped this standard. So if you are someone that wants to retain the ability to watch 3D movies, you will not be disappointed in this. The lumen count has dropped from 2200 to 2000 but this is still ample candels to fill a room so we aren't too worried about this.

Finally, another major improvement over the HT2550 is the fact that the HT3550 has the same throw ratio aas the HT 2050, which means it can fill a 150-inch screen at less than 15 feet and can serve as a drop-in replacement for the same. And the best part? with the new lens configuration, moving the zoom no longer disrupts the focus. If you are an HT2050 owner, you will not need to worry about moving the mount, simply do a swap and it will work like a charm.

The BenQ HT3550 comes well packed as always and should survive a journey pretty much anywhere in the world. The packaging contents are simplistic and contain the remote, the projector, an individual calibration report, and a power cable.

The HT3550 features a sleek metallic face with a newly designed lens configuration that stays recessed inside the body. The cover is attached to the projector so you don't lose it. The mounting screws were a bit awkwardly placed but I was eventually able to swap it for an HT2050. The IO port at the back features a generous array of connections including powered HDMI ports and some legacy ports.

Compared to the bulbous looking HT2550 and TK800, this is definitely a step in the right direction and feels a lot more premium. The metallic face has 4K HDR printed in gold letters and this is a projector that is going to look good in any setting.

Okay, so I will be straight forward about one thing. When I initially got this sample, I had an odd issue with the XPR processor dropping the native resolution to 1080p randomly. I contacted BenQ and they told me to upgrade the firmware. Once I upgraded the firmware, I did not run into the problem again but just thought I would put this here in case someone else faced the same issue.

The HT3550 experience can be summed up in one word: dazzling. The projector is already well calibrated out of the box but some further adjustment might be needed since BenQ engineers favor a greenish base compared to a neutral or warm base. Once calibrated, however, I could see that this was truly a worthy upgrade over 1080p. 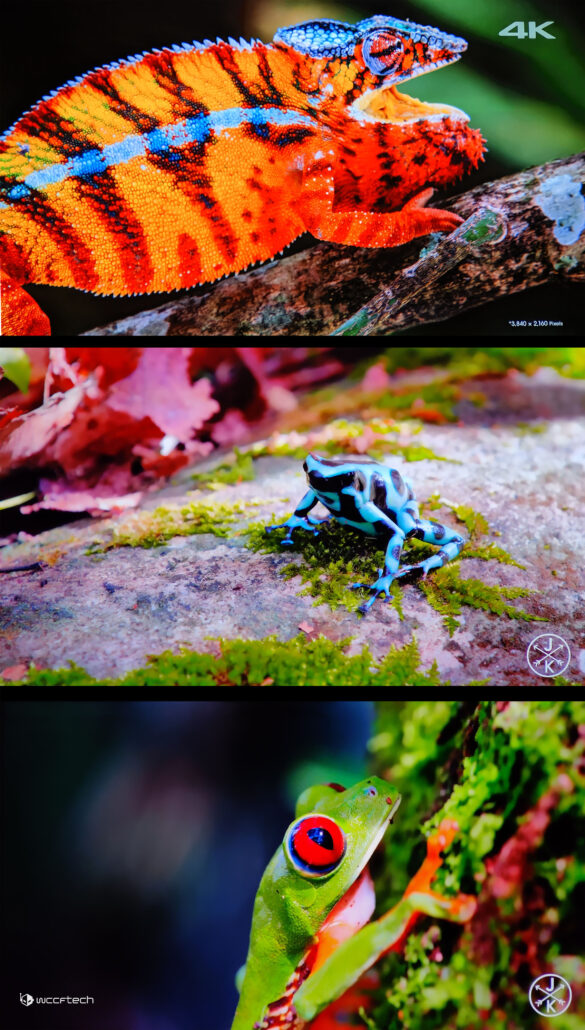 Image samples of the BenQ HT3550 projected on a 150-inch screen.

I was using the non-wide-color-gamut mode with a calibrated image (in Bright mode) and I could see every detail in excruciating clarity. This projector does have visible chromatic aberration if you are close enough to the screen but it is honestly not visible from any viewing distance. I had to walk towards the screen and get as close as two feet before I was able to distinguish any purple in black and white high contrast areas (mostly text on a white background). This is a non-issue and anyone raising this concern as a primary argument against this projector has clearly never tried it.

You might have noticed that I prefer to run this projector without the wide color gamut mode. The reason is that while the WCG mode included in the BenQ HT3550 is superb and makes a drastic difference in color depth, it does so at the cost of brilliance and luminance of the image. Now different people might feel differently about this - some could prefer the wider color depth over brightness and this is strictly a subjective decision so I will showcase the differences here.

In the image on the left, with wide color gamut on, the color depth increases drastically. The orange tint on the mountains was not even visible before and it is a very subtle tone of the rock. Similarly the clouds which were very slightly overblown before now have more color information. That said, there is a difference in lumens and the following picture should be better able to illustrate the difference: 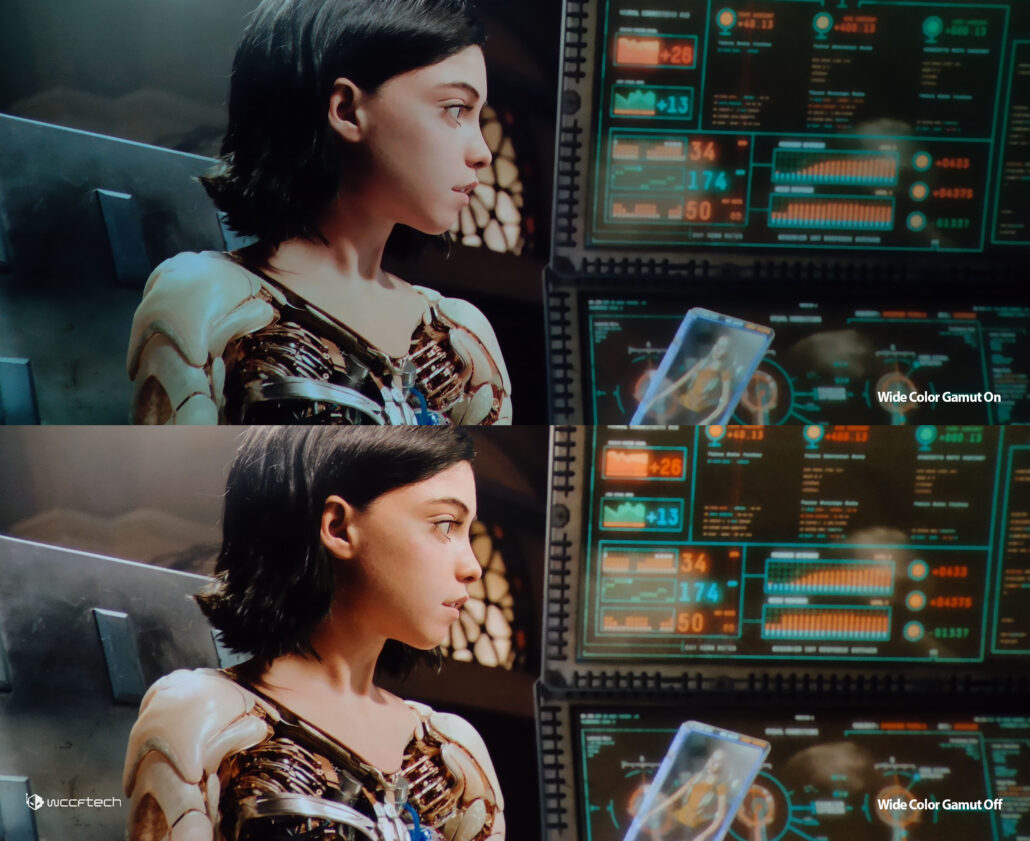 As you can see here, the luminance falls by roughly 20%. It is worth noting that this isn't BenQs fault. Wide color depth is achieved by adding a stronger color filter over the same lamp and that reduces the luminance while increasing color information (because physics). Whether you prefer wide color gamut or brightness with a reduced color gamut is totally up to the user and considering the projector is 100% Rec. 709 in both modes anyways, it might not be as difficult a decision as you would expect.

The sharpness of the BenQ HT3550 is also very impressive (when focused properly! and for the love of God, do not use the auto keystone function) and YouTube videos in 4k are an absolute treat to watch. Considering you are dealing with native 4k resolution, you would need an internet connection with at least 20 Mbps speed to be able to stream these easily.

One funny (at least to me) caveat that I would like to mention here is that the projector is not capable of running XPR properly if you are using its inbuilt speakers at full volume. XPR works by shifting tiny mirrors inside the projector very fast and at full volume, the vibration from the speaker disrupts the calculations causing your image to become blurry whenever the frequency is low enough (bass). Considering anyone buying this projector isn't likely to be using the inbuilt speakers and would almost certainly have a dedicated sound solution, this isn't really a con in my book.

The brightness of the image (projected on a 150-inch screen in a dark room) in non-WCG & Bright mode was 300 lumens while D.Cinema in WCG mode was 210 lumens. In comparison, the older HT2050 could only chug out 225 lumens at 1080p. This essentially means you are not only getting a more crisp, detailed image, but one that is brighter as well. Lumens measured from the source in bright mode were 2050 - which is actually higher than the rated value of 2000! 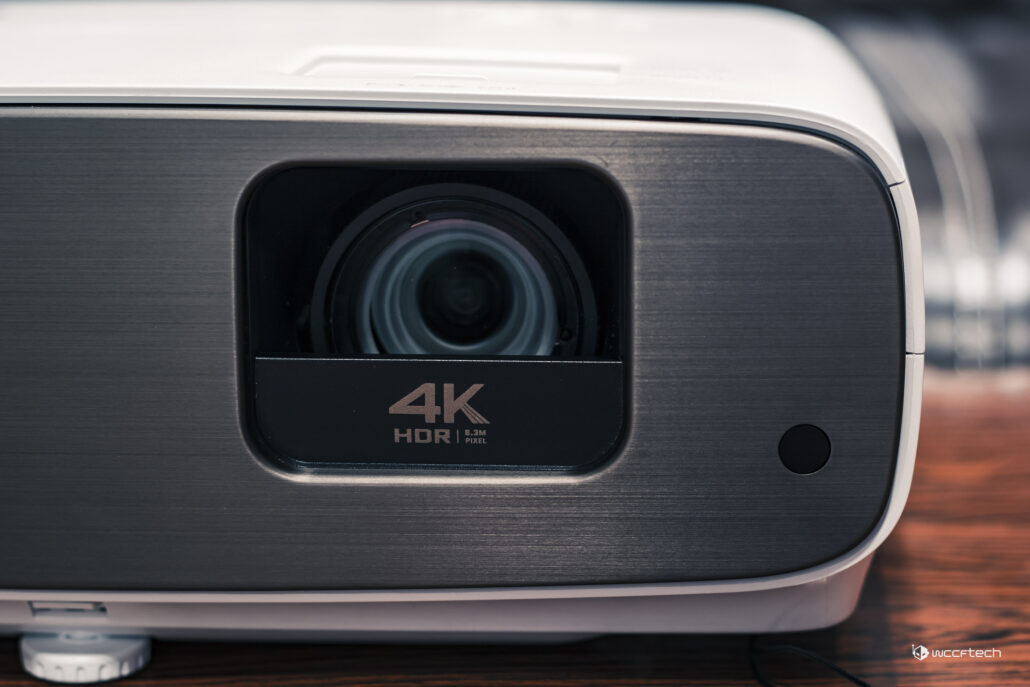 It feels like I cannot sing enough praises of this powerful little projector. It offers tons of improvements over its predecessor at the same cost - including Dynamic Iris, larger throw ratio, fixed light border, calibrated factory report, and an overall brighter image. To put this into perspective, Dynamic Iris is a feature that usually becomes a mainstay from projectors over $3999. To top it off, BenQ is still happily offering 3D support while many of its competitors have removed it from their $1499 offerings.

If you are in the market for a $1499 projector, then I have no qualms in recommending this to you as the absolute best-in-class 4K HDR projector. It also wins our Editor's Choice Award.

The BenQ HT3550 is an absolute home run by the company. With absolutely spectacular image quality, dynamic iris and the flexibility to switch to wide color gamut (at the cost of brightness), this is easily the best home theater projector in this weight class by quite a large margin. If you have a budget of $1500 and are on the market for a projector, you will not be disappointed with this!