A year or so ago, 4K projectors would have cost you a kidney, an arm, and a leg, but with the advent of Texas Instrument's XPR based DLP chip, they are finally in affordable territory (where affordable is defined as just a single kidney). An influx of 'budget' 4K projectors have hit the market and almost all are priced within the 1300-1700 USD range.

Today we will be reviewing the BenQ HT2550 (known as the W1700 in EU) and the BenQ TK800 4K HDR projectors which are priced at $1499 each - both of which were provided to us by the manufacturer for review purposes. 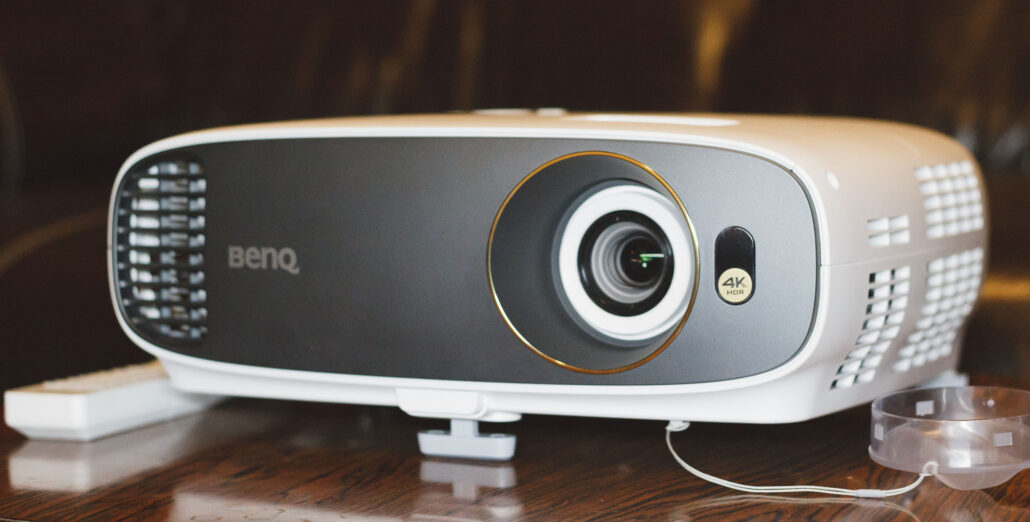 Most of the 4K HDR budget projectors out there will be using the Texas Instrument XPR chip. Some, however, lack certain features (for eg Optoma's offering has no 3D support). These projectors do not have "native" 4k - but they absolutely are 4K certified projectors. There are two kinds of non-native 4K projectors on the market - enhanced ones, which simply accept a 4K source but output only a 1080p image and XPR ones, which output a "true" 4K image.

The way they accomplish this is by pixel switching (XPR). The chip itself has 1080p pixels but after projecting the first batch of 1080p pixels it shifts 1 pixel to the right and projects another set of pixels and so on. Your brain blends the image together and what you see is an utterly gorgeous true 4K image. A native 4K projector might have a slight edge over these but I have seen both up close and my eyes could discern no visible difference between an XPR-ed 4K image and a native 4k image at viewing distance while the difference between a 1080p PJ and an XPR 4k one is night-and-day.

BenQ chose a very product strategy this time around. They had a single chip that fit in this price segment could either optimize it for brightness (or lumens) and color accuracy. Only, they didn't. They decided to release two variants that feature the same DLP chip with different color wheel configurations - one optimized for brightness and the other for color accuracy. For some reason, the nomenclature is very different on both and could be misleading to the average joe - which is where this review comes in.

Basically, the TK800 is the projector that you get if you are not interested in having a dedicated home theater and just want it for playing games or casual lounge-use. If you are intending to build a light-controlled dark room than the HT2550 with its superior colors is definitely the way to go.

Another great thing about BenQ's budget 4K projectors is that they support 3D. Many other manufacturers that are using the same chip do not support 3D. The DLP-link based 3D support only runs in 1080p resolution mode however but this is a pretty big differentiation factor over its rivals. The remote included with both projectors is identical and features a red backlighting for use in dark situations. Through this review, we will help you figure out which projector is the right one for you.

The BenQ HT2550 features an RGBRGB color wheel with 2200 manufacturer-rated lumen spec. This means that it is around the ideal brightness for cinematic color quality on a 130-150 inch screen. The BenQ HT2550 is the direct successor to the HT2050 and the difference between picture quality is night and day between the two. Unfortunately, however, the HT 2550 only has a 1.2 zoom factor (compared to the HT2050's 1.5x) which means you are going to need a lot more to project the same picture size.

The RGBRGB color wheel configuration allows it to project very accurate color and once calibrated - it is indeed a thing to behold. ISF modes are included that you can use to get almost reference color out of the box. All that said, for the perfect black levels to actually appear, you need a pitch black room. Black curtains and perfect ambient light control is absolutely critical. We conducted all our tests at 0 lux ambient light and the results were spectacular.

The 4K image projector was incredibly detailed and the color accuracy was spot on. 4k material flew to the screen with almost picture perfect accuracy. XPR might be a cheap way to get 4k but it is 100% a 4k picture. If it wasn't the occasional horizontal flicker that I could catch standing 1 foot away from the screen, it would have been almost impossible to tell that this was not native 4k.

So let's start with the BenQ HT2550 and why you would want to buy it:

The BenQ TK800, on the other hand, is a projector that features an RGBW color wheel. The last RGB configuration has been swapped with a "W" configuration that improves highlights in color and general overall luminance. More white light, however, means fewer color lumens. What this essentially means is that you would get a very bright picture - but at a cost of color accuracy.

Now here's the deal, however, at a massive 3000-lumen count, and an ALR screen that has a slightly negative gain, you are going to get some pretty decent picture quality even with low levels of ambient light. The maximum we suggest ambient light to be at, is 43.8 lux, unless you are watching something that does not require deep black levels (like sports). Which is around the light of a dim-moderately lit room (42 candles to be precise).

Here are the reasons why someone would go for the TK800:

Now we pit the TK800 against the HT2550 and the difference in color is pretty obvious. Both projectors were tested on the Vivid TV settings and not the Cinema mode. The reason for that is because the TK800 loses most of its white lumens in that particular mode. It is immediately obvious that the HT2550 prefers smooth, flowing color accuracy while the TK800 prefers sharp highlights, a very bright image, and huge contrast.

If you take a look at the sample images above, you will notice how the chameleon on the right has white spots on its stripes. There were no white stripes in actuality, its just the TK800 incapable of projecting that light a shade of blue - while the HT2550 can. The same goes for the red skin under the mouth. While the red on the right is more saturated, the true color is the orange tone on the left. It is also clear that the TK800 has a higher contrast due to its high-intensity whites.

That said, the color quality of the TK800 was surprisingly good considering it's using only an RGBW color wheel. I have no qualms in saying that unless you are an enthusiast, you won't even notice the color differences and will be blown away by the bright picture that it projects.

Screendoor effect is virtually nonexistent in both projectors. I compared it to an HT2050 that I had on hand and while you can see the screendoor of the 2050 from viewing distance (14 feet), it is impossible to see any pixelations unless you are as close as 1-2 feet from the screen in the case of the TK800 and 2550. Both projectors passed with flying colors.

HDR testing on the other hand, however, was a bit of a mixed bag. In some cases, HDR10 source material looked good, but in other, the dynamic range actually dropped. The BenQ HT2550 blows away other competitors in this range in standard mode but might have a bit of a tougher time in HDR10. This, however, is not something I am even slightly worried about. HDR10 requires coverage of the entire Rec. 2020 color gamut and no projector or tv under $10,000 is going to give you that image right now. Oh, and whatever you do, stay away from the simulated HDR mode. 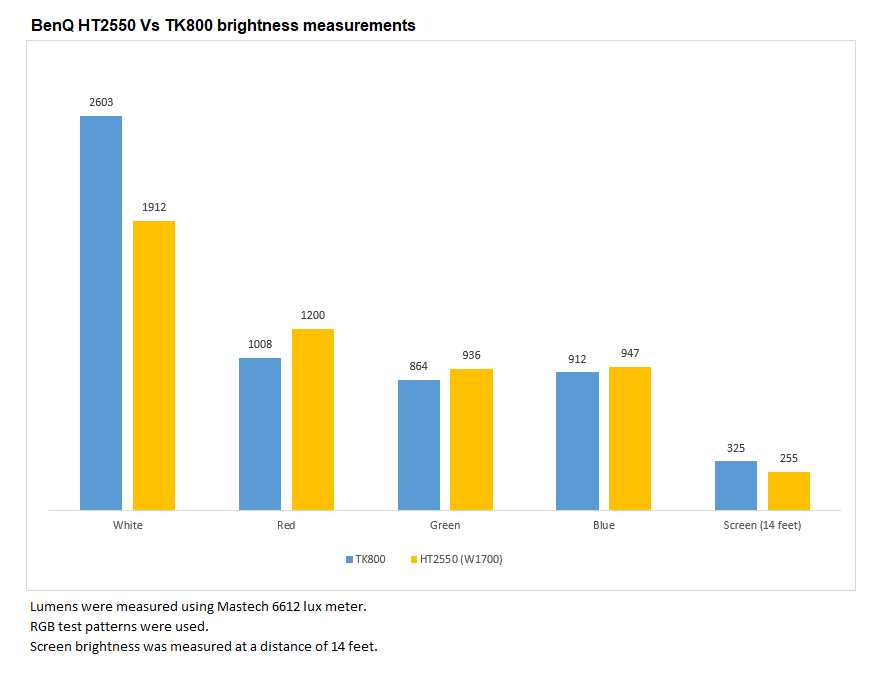 Finally, I have also added some packaging and closeup shots of the dials, buttons and DLP lamps (that sync 3D). The box packaging of the 2550 is much more elegant and classy, while the TK800 features a more blunt and bold approach. The projectors do not feature lens shift, but do feature keystone.

Both the BenQ HT2550 and TK800 offer breath-taking image quality (with the former in the lead in terms of color accuracy and the latter in terms of brightness) at a fraction of the cost of a 4k projector of olde. The dynamic range is spectacular (although HDR mode is lacking, this isn't something we expect out of a $1500 projector anyways) and the details vividly clear.

With the great lamp life - which is probably the longest of any DLP lamp I have seen by the way - this is a no-brainer for anyone looking to get a big screen. The 1.2x zoom factor is the only complaint I could make to the manufacturer but I guess you can't have everything all at once. You can pick up the BenQ HT2550 or the TK800 for $1499. 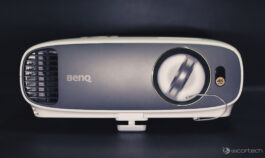 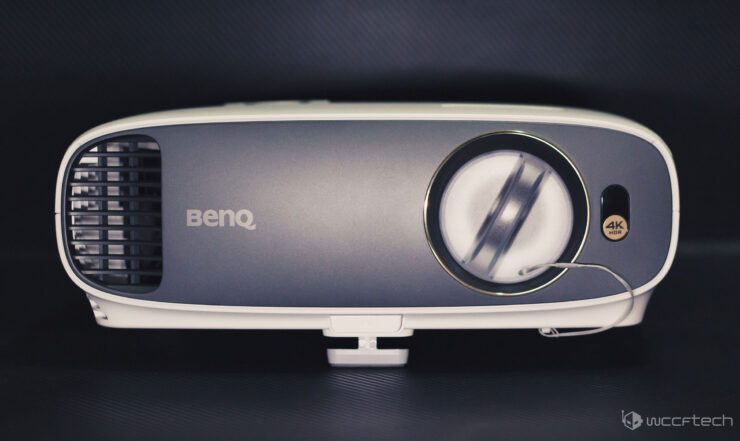