The Left 4 Dead series had a massive impact on video games as a whole, featuring many of the mechanics that still power modern co-op games. Despite the series' success and legacy, Left 4 Dead has disappeared from the spotlight, leaving fans no choice but to play the two classic games while waiting for a new entry in the series or for its spiritual successor. And such a game has finally arrived.

Back 4 Blood, developed by Turtle Rock Studios, doesn't even try to hide its primary inspiration. This is hardly surprising, considering that it's the same studio. It doesn't mean that Back 4 Blood stops at just paying tribute to the classic series, however, as the game comes with some exciting features that modernize the classic co-op gameplay and make the experience possibly even more engaging, despite some issues here and there. 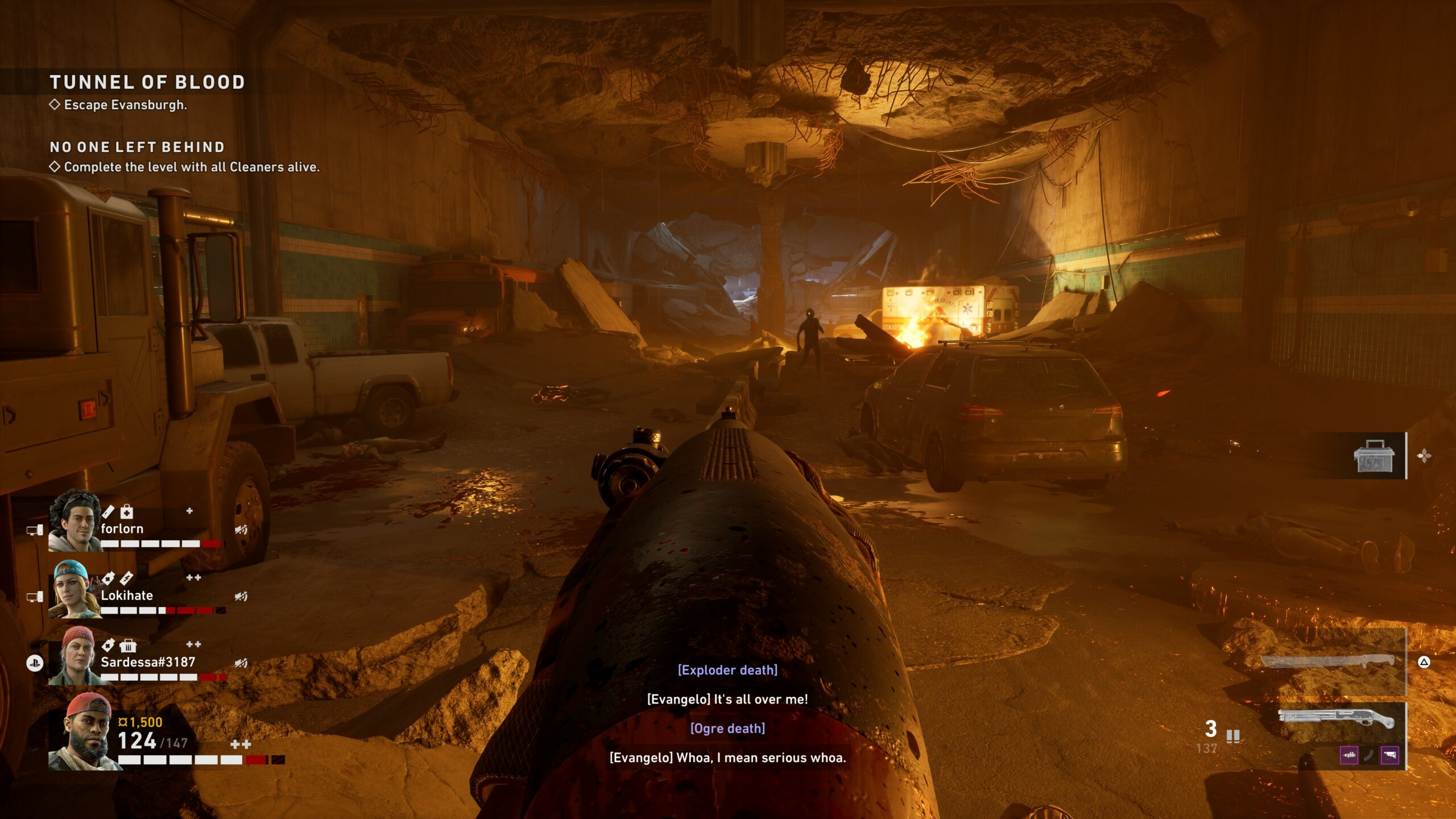 Back 4 Blood features a very run-of-the-mill zombie story that never truly takes center stage. The world is plagued by the Ridden, normal humans who contracted the Devil Worm parasite and turned into horrible monsters, and it is up to the Cleaners and other survivors to make sure that humanity isn't completely lost. During the 33 stages long campaign, players will get to know the Cleaners better and help them achieve their vital goal.

One thing is for certain: no one should play Back 4 Blood for its story alone. While it's not entirely bad, it's very predictable and serves only as a backdrop for all the Ridden slaying players will be doing. The Cleaners, on the other hand, are a little more interesting, and they get a decent amount of character development, although it can be hard to follow as this happens mostly during missions where the players' focus should really be on taking down the hordes of Ridden.

Where Back 4 Blood truly shines is in its gameplay. While the formula isn't particularly complex, it offers great amounts of fun, especially if played with friends that have a good hold of the mechanics. The main play mode is the co-op campaign, where up to four players can join together to complete 33 missions set in different maps and featuring various objectives. The maps are masterfully designed and highly varied, as each one of them features a different gimmick: some of the maps simply require players to reach the Safe Room, while others task players with defending a set location, rescuing survivors, destroying Ridden nests, and even protecting a Jukebox from the infected. The map design is so good that playing through them repeatedly never feels old, thanks to some interesting mechanics that spice up the experience even more.

Back 4 Blood features a unique gameplay mechanic called the Director which influences every playthrough at any difficulty setting. This mostly consists of special Corruption Cards that alter the maps in several ways: one card may increase the chances of special Ridden appearing, another introduces multiple alarm doors that will alert the horde, others will spawn bosses, and so on. Players can pick which of these cards are to be used in a map, so it is possible to make a run as complicated or as easy as possible, within certain limits. And the higher the difficulty levels, the more dangerous the cards' effects will be, essentially forcing players to pick their poison and hope their teammates are ready for the dangers ahead. 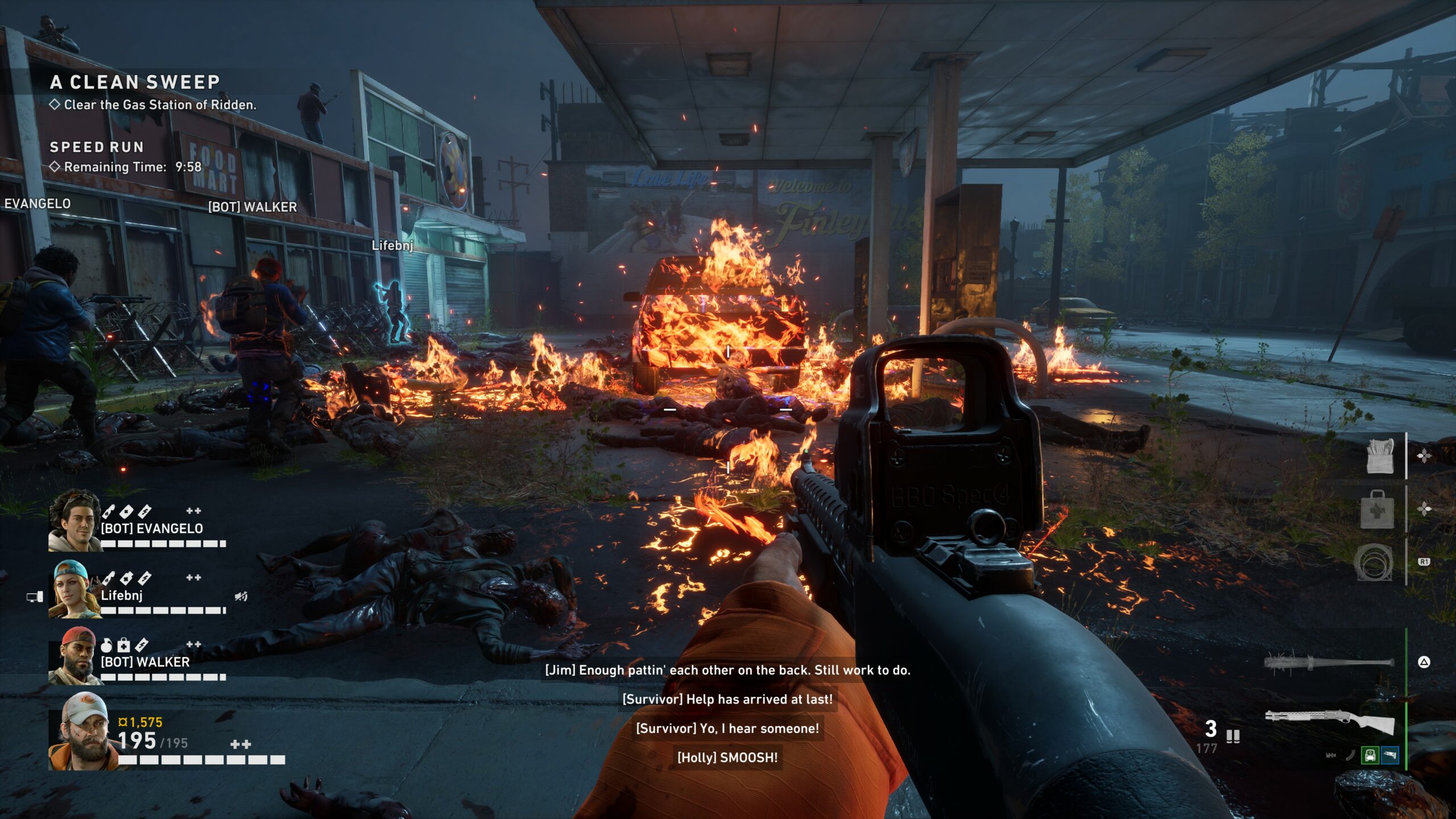 It's not just the Director that is involved with the card mechanics, as players can put together a deck of cards featuring a lot of different effects, ranging from stat and abilities boosts to new melee techniques and more. This essentially allows players to come up with different builds that add even more variety and replayability to the entire experience. For example, I have tried creating a melee build that does work decently (most of the time), although the huge number of enemies in any given map made me resort to firearms far more than I expected. I went back to the base, tweaked my deck a bit to include some firearms boosts, and things have been going smoothly since.

It's these mechanics that set Back 4 Blood slightly above Left 4 Dead. While some of the simplicity of the original series was lost in the process, Back 4 Blood actually rewards players for engaging with the game, giving them a sense of progression that was simply not there in the classic games. The more players play the campaign, the more Supply Points they will earn, and the more cards and cosmetics they can unlock, making for an addictive loop.

The great map design and the card mechanics would mean little without satisfying gunplay, and I am happy to say that it has been improved a lot over last year's alpha and the beta from a few months back. All guns pack quite a punch and shooting down Ridden is hugely satisfying. All weapons are pretty much viable, as they can be improved with a variety of attachments that can be found in supply crates or purchased while in the Safe House with coppers obtained during and at the end of each mission, alongside tools, restorative items, and so on.

While the co-op campaign in Back 4 Blood is very well crafted, it does suffer from a few issues. For starters, the game has some very weird balancing. The Recruit difficulty is very forgiving, as the Ridden have low health and do not deal much damage. Mutations also don't appear too often, giving players plenty of time to explore the maps without having to face danger at every turn. The Veteran difficulty, which is supposed to be the Normal difficulty level, ramps things up maybe a little too much, making it difficult for players with limited experience to make it out alive from most missions. In my opinion, the game needed another difficulty setting between Recruit and Veteran to better ease players into the Veteran setting, as Deck Building and Corruption Cards are not all that important for completing the game in Recruit: you can pick any deck and you will make it out with ease.

Things are made even worse by the horrible AI that takes over any character if a player leaves the game. Bots are, simply put, totally incompetent: they get stuck into walls, they take a lot of time to revive fallen players, and they generally do some stupid things that make Veteran and Nightmare difficulties even more unfair. These issues are easily addressable, and I expect they will soon enough. 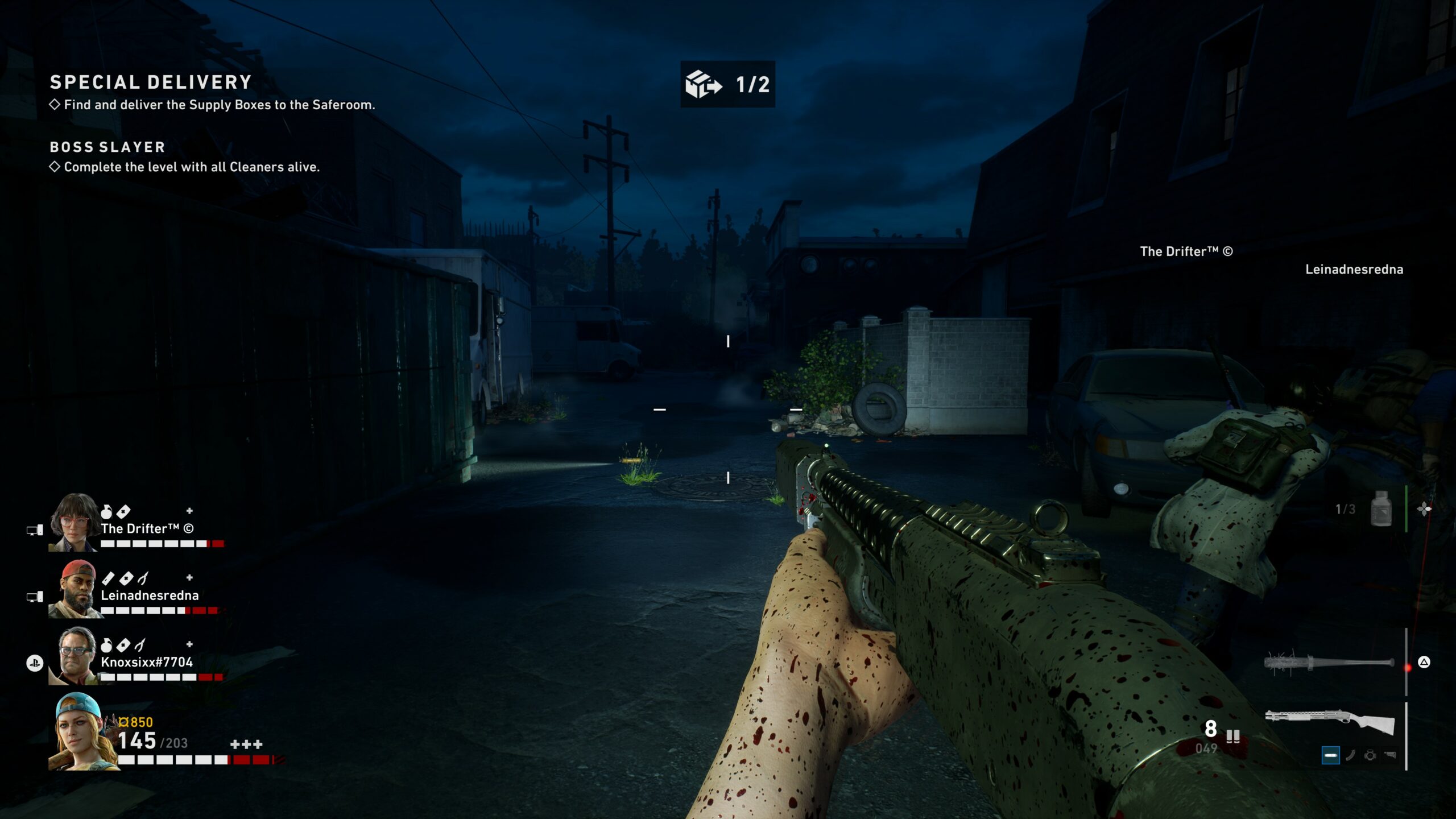 The bad AI also damages the experience for solo players, although it is not the only thing that makes Back 4 Blood not suited for those who want to play by themselves. Playing the solo campaign means foregoing all sorts of progression, as Supply Points cannot be earned by completing missions solo. This is somewhat balanced by the fact that all cards are unlocked for solo decks right from the get-go, but it also makes it clear how Back 4 Blood is not a game that has to be played solo, as most of the features that make the experience engaging are limited or outright removed.

Alongside the campaign, Back 4 Blood also features a PvP mode called Swarm, where teams of four players play as either the Cleaners or the Ridden. This mode features some exclusive maps and mechanics, such as the ability to power up the Ridden, and it works decently for the most part. Like for the main campaign, coordination and teamwork are extremely important, so playing with friends is always advised to win and, most of all, have fun.

In an age when games are often released in broken and buggy states, Back 4 Blood stands out for being a very polished experience. In my time with the game, I haven't encountered any major bug, sudden crash, or any other significant issue, save for some weird Ridden animations that did not impact the experience whatsoever. Online play also works great, although matchmaking times seem to vary a lot even with crossplay allowed, but this could be related to the fact that the game was tested during the Early Access period with a limited player base. The game also doesn't suffer from any performance issues, as it had no trouble running at 4K, steady 60 FPS on the machine used for the test (i7-10700 CPU, RTX 3070, 16 GB RAM) even without NVIDIA DLSS or AMD FSR. The upscaling technologies from NVIDIA and AMD can be used to further improve performance if needed, ensuring that pretty much any modern system is able to run Back 4 Blood smoothly.