Despite having moved the series even further from its predecessors, Assassin’s Creed Valhalla is a game that no fan of the series who liked the previous two entries in the franchise should skip, thanks to an enjoyable story, charming protagonist, and better thought-out RPG mechanics that prevented the game from being too grindy like Origins and Odyssey.

While Assassin’s Creed Valhalla already received additional content via free game updates, Wrath of the Druid is the game's first full-fledged expansion (available for separate purchase or as part of the Season Pass). The free content released thus far literally pales in comparison, as the expansion adds a new big map to explore, a new storyline set in 9th century Ireland, new abilities, new weapons, and even some new gameplay mechanics, and improved versions of mechanics that have been introduced in the main game, such as the Settlement building mechanics. They definitely do not make Wrath of the Druids feel like a completely different game, to be sure, but they are all worthy additions to the experience.

The Wrath of the Druid expansion can be experienced after completing one of the two story arcs available in England, but no matter the current power level reached by Eivor, the experience will always be properly balanced, as the expansion will adjust the power level of all territories found in the new map depending on that of the player's. Better yet, all territories in Ireland will always be more difficult than the previous ones, preventing players from power leveling and breezing through challenges. It is a nice touch that would have done wonders for the main game as well, since engaging with side content resulted in Eivor becoming way too powerful way too quickly.

Once the expansion can be accessed, Eivor will be notified of a new arrival in the Settlement. The trader Azar, hailing from Dublin, brought a letter from the King of Dublin, who wishes for Eivor to join him in Ireland. After the introductory mission, where Eivor frees the river from a blockade to build the Irish Trading Post in the Settlement, it is revealed that the King of Dublin is Barid, Eivor's cousin. Elated by the fact that their cousin has become a powerful man, Eivor journeys to Dublin, not knowing that they will get entangled in Barid's trouble, and get involved in a grueling battle against a mysterious druidic cult, the Children of Danu. This cult is influencing the politics of Ireland for a very dark reason, threatening not only Barid's rule of Dublin but that of the newly anointed High-King of Ireland, Flann Sinna.

While the story of the Wrath of the Druids expansion doesn't really stray too far from what we have seen in the main campaign, it is extremely enjoyable, its quality on par with that of the best questlines in the main campaign. The actual plot is intricate enough, leaving players hungering for more with each new reveal, and most of the characters Eivor encounters during his time in Ireland are quite charming, especially Flann's trusted bard and poetess Ciara. Some developments at the end of the 13 hours long story are also quite good, although not exactly surprising, so all those who enjoyed Eivor's adventures in England as they helped Danes and Saxons solve their troubles while fighting the Order of the Ancients will find plenty to like in Wrath of the Druids.

Just like for the story, the Wrath of the Druids expansion doesn't stray too far from the main game in terms of gameplay. The map of Ireland is not as big as that of England, but it is not as small as that of Norway either, featuring multiple territories that include the usual array of optional content in the form of Wealth, Mysteries, short side quests that provide a glimpse into the life and traditions of 9th century Ireland, and Artifacts. The Artifacts also include the Irish Cycle pages which provide even more information on the setting, and they are a great ready for those invested in it. While obtaining Wealth from a variety of locations, including new monasteries that can be raided for resources, players will also be able to get new Books of Knowledge, which unlock new ranged and melee abilities, and a new weapon type, the Sickle, a fast weapon that also works quite well while dual-wielding with another weapon type.

The new gameplay additions brought by the Assassin’s Creed Valhalla - Wrath of the Druids expansion don't stop at new abilities and new gear. The expansion also adds some new cosmetics, such as new hair and beard designs, and some new gameplay mechanics, that, while not exactly major additions, do add a little bit more to the experience.

Not having a Settlement to build and improve in Ireland, Eivor will be able to invest the resources obtained by raiding monasteries to improve ring forts all over Ireland. These ring forts include a variety of facilities that improve the arrow and food supply, improved storage for resources that can be traded with exotic materials, and more.

While supporting Barid and High-King Flann Sinna against the deadly Children of Danu is Eivor's main priority in Ireland, they also need to support other minor kings via the Royal Demands system. These requests, which must be completed at times to move the story forward, reward players with a variety of items if they manage to complete the objectives, which range from killing enemies in a certain area, sneak around to obtain an item, and so on. By completing Kings' Pleas, which are secondary objectives, it is possible to obtain even better rewards, although it can be difficult to complete the stealth-based pleas due to how the game doesn't really favor stealthy gameplay.

The Order of the Ancients mechanics found in the main campaign also makes a comeback in the Wrath of the Druid expansion, only that, this time, Eivor is going after the Children of Duna, who have infiltrated Irish society to destabilize it from within. As such, like for the Order of the Ancients, Eivor will have to find clues first before being able to take down a member of the druidic cult. Druids also make an appearance in one of the new types of side-content included in the expansion, the Druid Trials combat challenges, which will put the player's combat skills to the test. Even if you have mastered combat in the main campaign, you will still have to be on your toes, at least in the first few hours, as there are some new enemy types that can be a little annoying to take down in the heat of battle.

Featuring almost 20 hours of new content, divided between the around 13 hours needed to complete the main story and the around 7 hours needed to clear side content, a new, great-looking map to explore, a high-quality story, and charming characters, the Assassin’s Creed Valhalla - Wrath of the Druids expansion is a more than worthy purchase for those who loved the main campaign and haven't had enough of Eivor's adventures. Those who didn't exactly like the main campaign don't have a whole lot of reasons to join the Norse warrior in their journey to Ireland as, at the end of the day, the Wrath of the Druid plays exactly like the main game, not counting the couple of new mechanics that do not exactly turn the gameplay upside down. 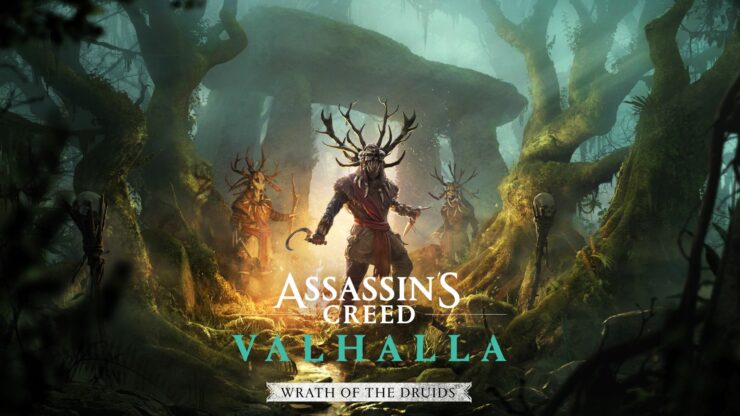 Assassin’s Creed Valhalla - Wrath of the Druids is a more than worthy expansion to the latest entry in the series, featuring a new beautiful map to explore, an engaging story, charming characters, new abilities, and plenty of other new content in the form of new gear, abilities and cosmetics. The new mechanics don't fundamentally change how the game plays, so those who didn't like Assassin’s Creed Valhalla to begin with will not change their mind with the expansion. Everyone else, however, will love every second of their time in Ireland as they did with their time in Norway and England.

Ubisoft and NVIDIA Blame Each Other for Assassin’s Creed: Origins Bug Present in RTX Builds