Even with some issues here and there, Assassin’s Creed Valhalla is among the best open-world games released last year, featuring a compelling tale and a vast world to explore. The great experience of the main game was further expanded a few months ago with the Wrath of the Druids expansion, which brought Eivor to Ireland to contend with a mysterious cult that threatened not only the rule of Ireland's High-King but also that of his cousin Barid's. Now, the open-world game by Ubisoft is about to be expanded even further with The Siege of Paris, the final expansion scheduled for this year. While this new expansion tries to bring back elements of earlier Assassin’s Creed games, its tale is not as compelling as that seen in the previous expansion.

The Siege of Paris is set in Francia, an empire that has been unified under Charles the Fat for the first time in the 9th century. Unity, however, doesn't mean peace, as Danes and Norsemen continue to raid along the Sienne, with the Chieftain Sigfred and his Elgring clan getting ready for another siege of the city of Paris following the original sack by Ragnar Lothbrok. It's to make this siege a success that Sigfred invites Eivor to Francia, although the leader of the Raven Clan has a rather different goal than Sigfred: persuade Charles the Fat to give up on any ambition he may have for England.

Assassin’s Creed Valhalla: The Siege of Paris' story comes with the same themes we have seen in the main game and the previous expansions, such as rules hiding more than a few secrets, a powerful group working from the shadows, the Bellatores Dei here in Francia, and betrayals aplenty. Characters, in general, are not particularly well-developed, often being exactly as they appear: Charles the Fat is as devious as he appears, Sigfred as brutal as expected, Count Odo shows right from his first appearance that he aims at something more than just defending Paris and so on. The plot itself is nothing special as well, as some of the twists can be seen from miles away. In this regard, the Wrath of the Druids expansion was way more enjoyable because the new characters had great chemistry with Eivor, and the Ireland setting allowed for some intriguing story developments. The problem with The Siege of Paris is that the setting is not all that interesting, and there isn't anything outside of the Christian zealots Bellatores Dei that makes Francia feel different from England. That is not to say that the story is awful, as it flows decently for its 10 hours of duration, only that after 80 plus hours in the game, one needs something else to feel completely engaged.

Assassin’s Creed Valhalla: The Siege of Paris doesn't change a whole lot in the gameplay experience as well, expanding what we have already seen in the main game and first expansion, such as introducing new skills and abilities, a new weapon type, the Scythe, and a few new enemy types. The biggest change in the experience is the Infiltration Missions, a modernized version of the black box missions seen in previous entries in the series. During these missions, players have to assassinate specific targets but have the freedom to do so however they wish, also having the option of unlocking additional assassination events by investigating the targets further. It's a nice callback to earlier Assassin’s Creed Valhalla and definitely the highlight of the experience. It's just a shame that there aren't more of them.

Although not as big as the Infiltration Missions, the second big addition to the formula is the Rat Swarm. A new element in navigational puzzles (and the main focus of one of the new ranged skills), these swarms will damage Eivor as soon as they come into contact with them, forcing players to swing their weapons to make them retreat inside grates or to find another route. They're not a major nuisance, but they are still a welcome addition that plays well with the setting.

For the rest, Assassin’s Creed Valhalla: The Siege of Paris doesn't differ that much from the main campaign. You will be moving from one area to another to complete quests, find Wealth, complete small sidequests that provide more information on the setting, raid locations for loot, and Synchronize with Viewpoints to reveal more of the land and unlock Fast Travel options. The map of Francia is actually not that big, which is somewhat disappointing, so it won't take long to find everything there is: completing all main story quests and clearing all side content, including new rebel side missions that Eivor is asked to complete to further weaken Charles the Fat's hold on the land, will take no longer than 15 hours.

Assassin’s Creed Valhalla: The Siege of Paris is undoubtedly the weakest of the two expansions, due to the predictable story and characters and the lack of any significant new gameplay mechanic, except for Infiltration Missions. After tens of hours in the game, dozens of synchronized Viewpoints, and hundreds of corpses left in Eivor's wake, more of the same is definitely not enough. 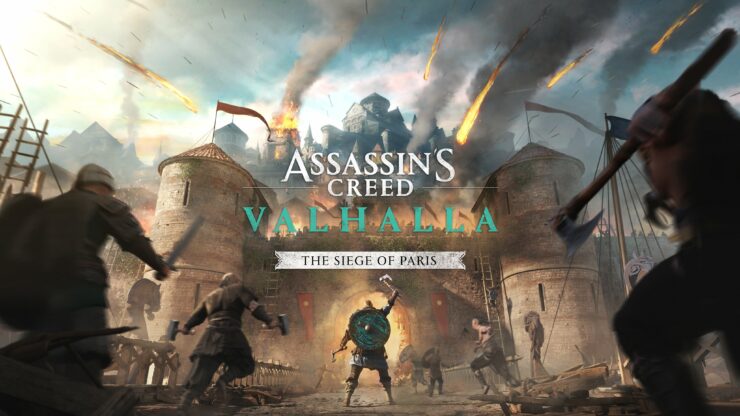 With a story that fails to go beyond serviceable and some not particularly inspired characters, Assassin’s Creed Valhalla: The Siege of Paris fails to reach the heights of the Wrath of the Druid expansion, basically offering more of the same in a somewhat uninteresting setting. The Infiltration Missions, a nice callback to earlier entries in the series, are not enough to salvage an experience that only the most die-hard Assassin’s Creed Valhalla fans will thoroughly enjoy.