Assassin's Creed Syndicate is one of the most historically inaccurate Assassin’s Creed games thus far. I have spent hours creeping through the darkened alleyways of London’s underbelly, climbing its iconic landmarks and even riding a few trains, and there is this massive glaring historically inaccuracy that ruins the game for everyone that’s visited the fair city of London.

It’s sunny. It’s sunny, like, most of the time. 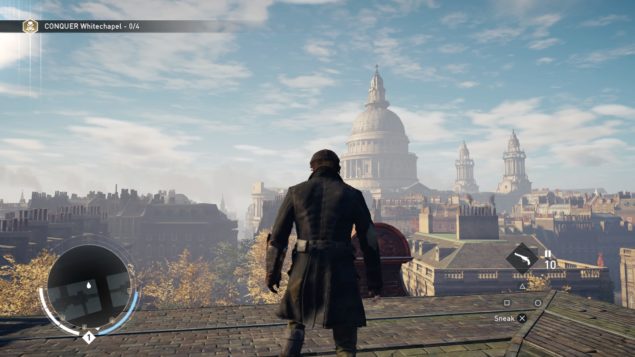 Apart from this obviously terrible rendition of true British weather, Assassin’s Creed Syndicate offers one of the most intriguing, beautiful and immersive cities in video game history. After entering the city through a delightfully crowded train station, you’ll get to explore the heart one of the most technically advanced cities of its time.

Why is that so many games in this series start outside the city you’ll be spending most of your time? Some could say that it is so the central characters could be introduced to the city at the same time as the player. I would say it so they can have a big reveal after the tutorial.

Regardless, Assassin's Creed Syndicate is nothing but beautiful. Its industrial, smog filled London is introduced right at the start of the game and its jaw dropping good looking. The AnvilNext engine, for all of its legendary (and sometimes exaggerated) flaws, delivers an amazing, pretty and vibrant city. 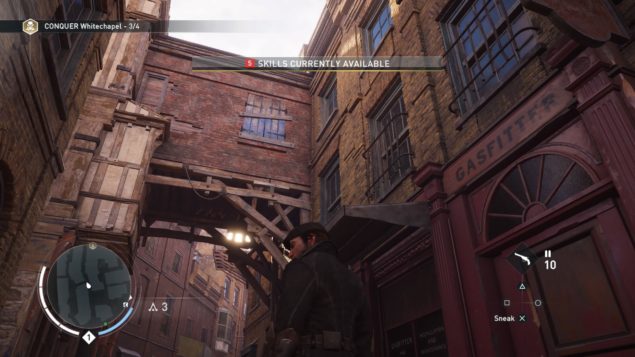 Assassin’s Creed Syndicate really wants you to fall in love with the city. London, while blighted with lots of oppressive industrialists, is breathtaking and bewildering. Syndicate is the first game in the series to realize 1:1 ratio on all the famous landmarks, and it really shows; although the boroughs aren’t as big as their real life counterparts, Elizabeth Tower (Big Ben) and St Pauls Cathedral loom high over the city and are a wonder to see from both below and above. Exploring is encouraged, and side missions are now built to drop in and out of as you clamber of the tiled and glass roofs of central London. If you happen to spot a Templar leader to assassinate, children to liberate or loot to pinch, you can just drop down and do so, or continue on your way.

Climbing up the factories, townhouses and churches have never been easier than in Syndicate either with the addition of the grappling hook, which players get early in the game. Now you can leap from the street to the rooftops, and from ledge to ledge in mere seconds. Where once Assassin’s Creed dazzled its audiences with the mere ability to climb, new iterations of the series aren’t afraid to evolve beyond that.

It is very refreshing that this eight year series is moving forward, both figuratively and literally; the Frye twins are an entirely different breed from the earlier assassins. 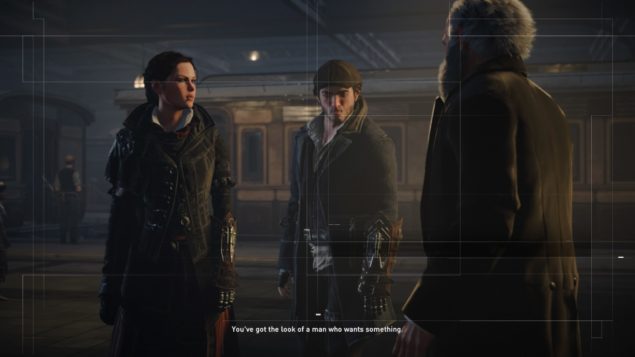 For one, you can now play as two characters, and one of them is a woman, despite the apparent difficulty in animating women in previous Assassin’s Creed installments. Evie, the smarter of the duo, is focused on stealth while Jacob, the funnier of the two, is more violence inclined.

This is one of the most positive changes I have found in my time with Assassin's Creed Syndicate. While previous games inferred a inherent necessity for stealth, Syndicate doesn’t make you feel like you’ve lost just because you’ve been spotted. Getting to choose how you approach a given situation and being able to adapt in real time is much better than constantly running in the shadows and waiting every time a guard gets suspicious.

The sneaking component also enjoys the boosts from the Unity, with the ability to sneak and the refined cover that lets you to do them clumsily wander through the scenery until you stumble upon your target. Combat itself has been overhauled once again, and feels incredibly suited to the dirty and crowded streets of London Town.

No one is carrying swords anymore, while pistols haven’t effectively taken their place yet. Instead, this is the time when patrons of street brawls carried knuckle-dusters, sword canes and knives. The animation for combat represent this more brutal bare knuckled style with brutal, fluid boxing, and the controls are quickly messy to boot. Instead of timely waiting for opening before running your enemy through, you’ll now be hammering the attack button a lot as your respective twin beats the living daylight out of variously colored cockneys. While keeping an eye out for sneaky left hooks or an enemy on your flank to duck and dodge around. It’s a lot messier than what Assassin’s Creed fans may be used to, and it’s still just as easy to accomplish, but the feel of it matches the atmosphere of Syndicate quite fittingly. 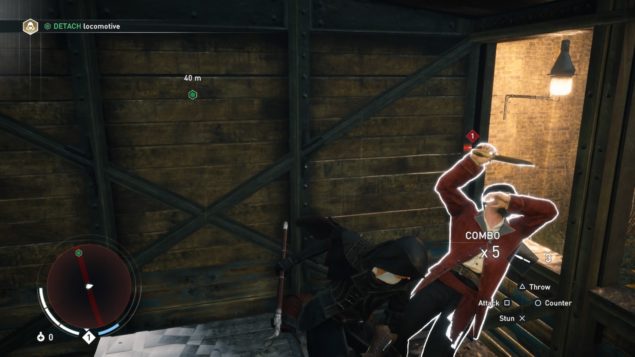 The controls are as sticky as ever, unfortunately. Sometimes you'll be gliding through the city with incredible momentum. Other times you'll be trapped on a windowsill. It's annoying at first, but after a little bit of practice you'll start to learn what to expect from the game. The trickiest entry is the grappling hook, as you'll wander around the street trying to aim the device at the right building. But again, after a while it'll all start to flow together.

In terms of performance and glitches, the game is certainly improved from the horrors of Assassin's Creed Unity. You might notice the occasional limb sitting through a wall or NPCs appearing from the ether, but nothing game breaking; also, Assassin's Creed Syndicate runs smoothly most of the time, and even under the busiest conditions it remains smooth enough that the gameplay doesn't suffer for it.

Moving onto the plot, I found the characters to be quite likeable. Jacob in particular is funny and a step away from the Assassin’s archetype initiate. He’s brazen, sarcastic, and not nearly as clever as he believes. He’ll agree to things for enjoyment over purpose and has a lazy attitude more often than not. Evie on the other hand is stern, short and amusing. She attempts to keep Jacob on a short leash and is extremely quick witted in putting him in his place.

The outer cast is also more varied and much more interesting than in previous entries. Maybe it’s because of my British upbringing, but this time around I recognized a lot more of the historical celebrities, such as Florence Nightingale, Charles Dickins and even good ol'Darwin. 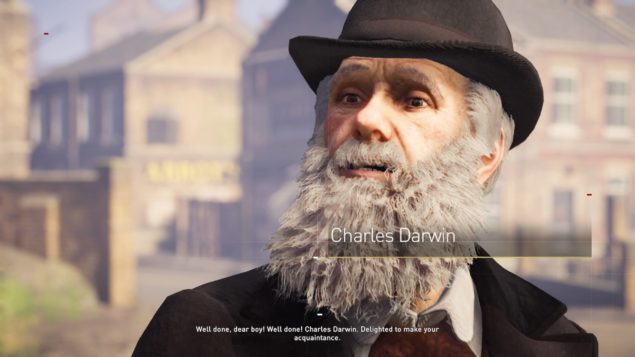 The villain feels equally refreshing too. Although his scheme is comical at best, controlling everything from the street gangs to the political class, it does allow the Frye twins to explore everywhere in London, from its seedy underworld to the heights of British society. His personality and character are intelligently fleshed out, creating a powerfully voiced (and powerfully mustached) adversary who’s creepily confident to boot. While you don’t encounter him in the early game as he’s completely untouchable, you’ll find him lurking with his trusty teapot in cutscenes, becoming more and more distressed by the tiresome twins.

Assassin’s Creed Syndicate is a game that confidently steps away from its ancestors. Although the DNA is clearly still the same, the new and updated features are a treat to experiment with. You'll explore London during the fabled Victorian era, with familiar sites to witness and famous icons to climb on. The graphics are great, the characters are more than the cut and dry quest givers they once were, and the combat has been lovingly revamped to match the tone of brawling in the streets of Victorian London.

It’s just a shame they couldn’t get the weather right.