Archangel Review – Have You Ever Wanted To Be A Giant Mech?

If you’re like me and recently finished your yearly binge of Neon Genesis Evangelion, piloting a giant mech can be one of your dreams. On the downside, that technology is still years away from becoming a reality if Gundam has taught us anything. So, what’s a player to do? Why not strap on a PlayStation VR and control one of your own? Standing six stories tall, Archangel gives players the opportunity to take a stand against a global terrorist threat and give humanity a fighting chance in this on-rails action game.

Archangel puts players into the role of either Gabe or Gabby (if you want to take the role of a female pilot) Walker just moments before tragedy strikes one of the last bastions of humanity. A tyrannical (terrorist) conglomerate known as HUMNX has overthrown whatever semblances of government left ruling the country and force survivors into hiding. Lucky for Walker, their base houses the only mech of its kind, a hulking behemoth with an adaptive AI that might just prove to be humanity’s last chance to fight back against HUMNX. The AI companion known as M1KL is as much a character as Walker and their rapport might be the only thing keeping Walker from succumbing to blind rage at the loss of their family at HUMNX’s hands. 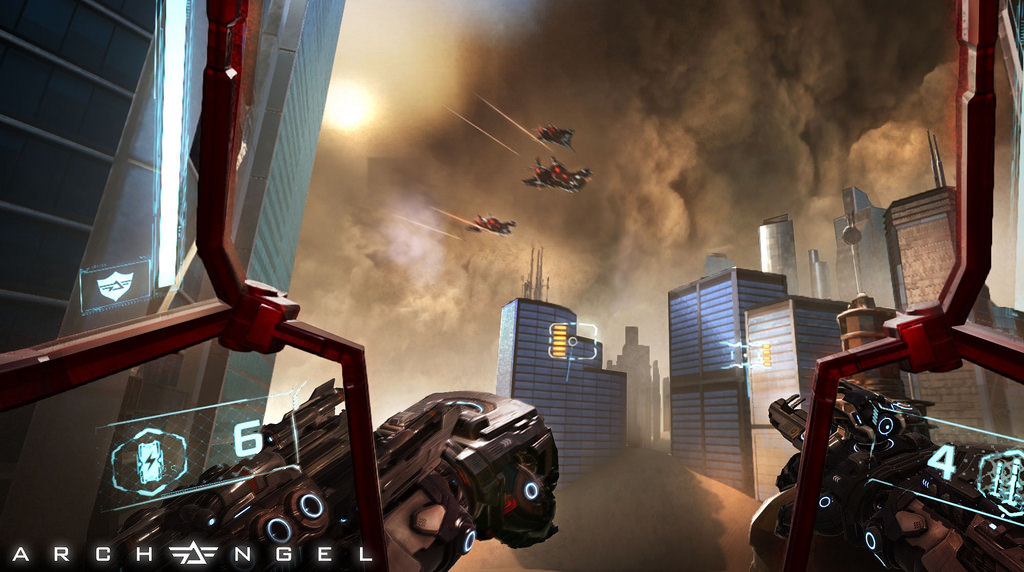 Along Walker’s journey across America to reach one of the last strongholds that have been resisting HUMNX, the pilot of Archangel will routinely face all manner of opposition, from rocket-toting ground troops to aerial drones to even larger mecha attack dogs. Any one of which isn't dangerous on their own, but Archangel tends to throw as much as they can at the player, forcing them to keep a shield up and attack with the other weapon, swapping between arms frequently to recharge their shields.

There are quite a few choke points that will test the player’s ability to multitask and mitigate damage which was always exciting, although frustrating in a couple specific sequences where it was a matter of learning to prioritize targets before they wear down the Archangel’s hull. Don’t expect to rely on just your machine gun or heavy rockets to take on HUMNX either; Archangel’s best moments come from cycling between your four munitions and keeping the attack going while recharging the other weapons, all the while keeping your shields up like a giant mecha gladiator.

Archangel isn’t just a shooting gallery against mindless drones. Guiding the player as one of the last beacons of hope for humanity, Walker and company will traverse across the continent in hopes of reaching Sanctuary. Along the journey, there’s a Hollywood-worthy story of redemption as Walker reveals the sins of their past and what motivates them so desperately to fight against HUMNX.

Being crafted as a cinematic adventure, Archangel will keep players on the edge of their seats for the better part of an afternoon. Coming in at somewhere between three-to-five hours (depending on how many times your giant mech bites the dust), Archangel has a tough time commanding a $40 price tag. A scoring system might give players a reason to revisit previous levels to boost their scores and unlock some extra mech upgrades, but I felt quite satisfied with my single playthrough as Mr. Walker.

Archangel does suffer some minor issues in terms of motion tracking. Much of the essential information for the player, such as hull integrity and precise ammo counts (there’s an approximate read that appears on your targeting reticle), is displayed on the outer extremes of the mech’s heads-up display. It wouldn’t be as much of an issue if you could simply tilt your head upwards to see your mech’s health, but the frame tends to move along with your movements to a certain degree, forcing the player to crane their neck to uncomfortable angles just to get a glance at your remaining health.

If you happen to have a pair of PlayStation Move controllers, Archangel will gladly support them and the experience is far more enjoyable with the equipment versus a standard DualShock 4 controller. With a Motion controller in each hand, you’re able to pilot the M1 with independent firing and much more accurately split your fire between multiple targets. I found utilizing a missile salvo that relies on individual lock-on to be a far more enjoyable experience with a quick aiming of the Motion controller versus the DualShock's analog sticks, plus keeping up a shield at the same time felt more natural with my other hand. It’s not to say that Archangel is only enjoyable with the optional Motion controllers, but being able to pilot your mech with realistic motions lends itself to being a more realistic experience.

As far as comfort is concerned, Archangel remains one of the finer seated experiences I’ve had the pleasure of experiencing firsthand on PlayStation VR. It may not be the first title to feature piloting a mech (that honor goes to RIGS, which you can see my previous review HERE) but it might be the first to feature a rig roughly the same height as one seen in Pacific Rim. Being a massive tower of death does have its perks and enemy forces simply don’t stand a chance against your two-fisted barrage of gunfire and missiles.

Archangel is a great seated experience that takes all of the heavy lifting out of piloting a giant mech and gives the player free reign to do what they do best: shooting and punching targets. To get the full experience, I definitely advocate tracking down a pair of Move controllers to make your robot boxing done right. If you can handle some questionable controls and want to pilot a walking tower of death, you know what you need to do: get in the damn robot, Walker.

Archangel puts players into the cockpit of the only giant mech capable of resisting a global terrorist threat. It's a great way to spend an afternoon, although the higher price tag might turn off some players. If you want a finely crafted shooting gallery with a compelling story to match, climb aboard and prepare for battle.