We all know the failings of mobile games, especially those based off of beloved gaming franchises. It’s either they go the Super Mario Run route of asking for cash upfront, or they go the Fire Emblem Heroes route of taking the mechanics of the full game, simplifying them, then adding in an abnormal difficulty curve that encourages spending cash. Neither is exactly ideal, that much is clear, and Animal Crossing Pocket Camp definitely has more shades of the latter. What we have here is the Animal Crossing experience, but monetized - luckily, that monetization will only hit those who play the game the longest. 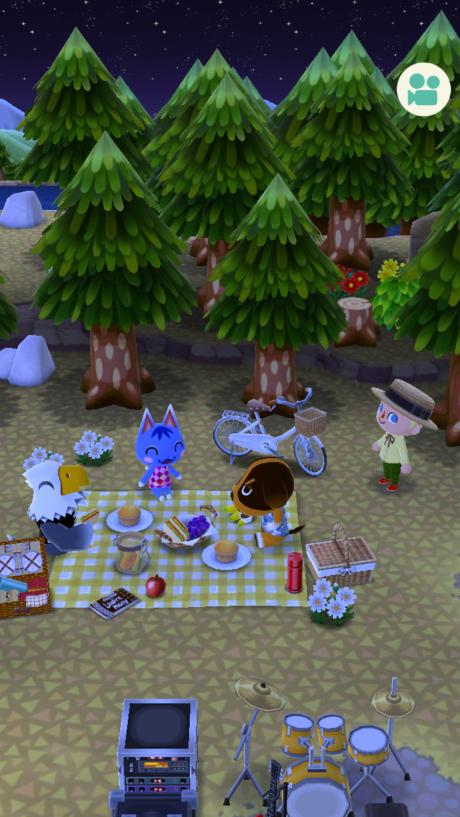 Animal Crossing Pocket Camp is, of course, a brand new mobile game spinning off from the Animal Crossing series, taking most of what made the original game great and, for the most part, successfully putting it into a mobile form factor. You can fish, catch insects, scavenge for seashells, and help out the anthropomorphic animals that hang around the various campsites you’ll be wandering around. But of course, they’ve injected mobile game mechanics into the mix, too.

Shaking a tree down for fruit now causes a three-hour timer to tick away before letting you harvest them again. Not too bad, considering in traditional AC you’ll be waiting for up to three days, but also sucks because unlike in traditional AC, you can’t plant more fruit trees - you’re actually at the mercy of the timer, here. Fish and insects quickly seem to become more sparse after you’ve hunted down a few, too. I can’t put any numbers to this, but it seems like once you’ve caught a few fish or insects in an area, they won’t pop up again in decent numbers for a few hours.

The animal villagers are on timers of their own, too. They prop up tents in sections of the campsite you can visit, and will give you three requests you can fulfill, requiring fruit, shells, fish or insects. Gather everything they want, and they’ll reward you with some crafting materials for furniture and some cash - no matter what they offer you, you’ll always get more cash in return than you would’ve for selling them, in addition to materials. Just like fruit on the trees, animals swap locations and refresh their requests every three hours. 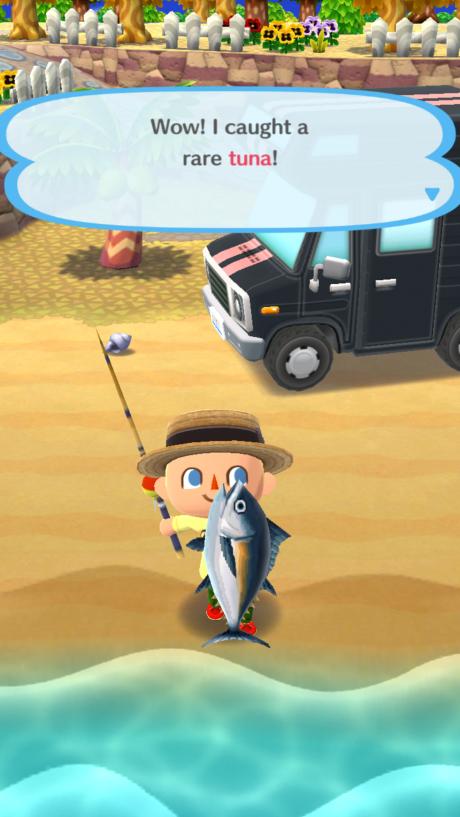 However, these timers actually seem to work to the game’s advantage. Honestly, in long periods of play, Animal Crossing Pocket Camp becomes tedious. Fulfilling requests is the main part of the gameplay, outside of fishing and catching insects, and once you’ve spent 20 minutes making sure everyone’s happy, there’s not much to do. This is the cue to switch off. Turn the game off, put it down, and pick it up either later on or the next day, and suddenly, a new variety of characters and tasks is available, and just like that, my interest in the game is renewed, too.

All of this busy work is to ultimately improve your campsite, where you’ll decorate it, just like your house in the main series games, and invite animals to come live with you. It all makes Isabelle happy, and she’s cute so it’s worth it. To invite animals, you’ll need to have Cyrus craft specific pieces of furniture and amenities, so you can level up your own level, and your friendship level with the animals. At first, this is a quick and painless process, and you can easily find yourself at level 10 after a day or two of playing. After you’ve made friends with most of the cast though, you’ll be happy to see some new faces. Levelling up becomes a tiresome process. 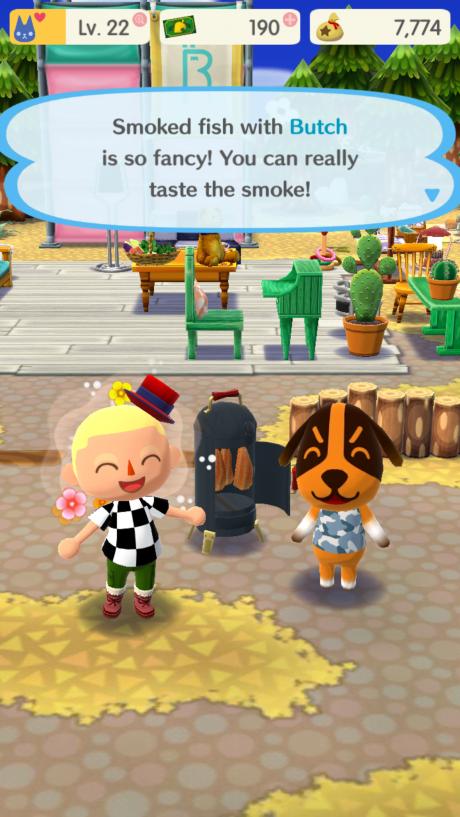 In fact, everything near the beginning of the game is speedy and straightforward but becomes much slower and more frustrating as time goes on. Crafting furniture in the early game? It will cost a small amount of crafting materials and a few hundred bells, will take a few minutes to craft. Late game crafting, however, requires much more materials, usually from 6 pieces of material for early game furniture, to nearly 100 pieces of material for later in the game. Much more cash is required too, and also you’ll regularly see timers of 1, 2, 8 or 12 hours tick by as you wait for them to be delivered.

This, finally, ties back to the premium currency of Animal Crossing Pocket Camp, the Leaf Tickets. In fairness, by completing Timed and Stretch Goals (quests, essentially) you’ll earn plenty of Leaf Tickets, and can quickly enough unlock more crafting space for Cyrus so you can have three pieces of furniture crafted simultaneously, in addition to an amenity. I was nervous about spending Leaf Tickets, as I didn’t want to ever have to spend money in Animal Crossing Pocket Camp, but to my delight, I could spend and get rewarded with more fairly quickly - as long as I was sensible, that is. Spending tickets on a bigger inventory or more spaces to craft things with Cyrus is smart, but spending cash on bug or fishing nets isn’t.

Of course, everything in the game can be expedited with Leaf Tickets. Those long crafting times, the materials you lack, fish, insects, absolutely everything can be solved with Leaf Tickets. And that’s where the end-game gets you. Levelling up is difficult once you’ve made friends with most animals, and therefore getting more Leaf Tickets is a pretty big time investment - and playing the game without them is even longer. Once you’ve gotten to level 20 or higher, you see the allure, how they wish to draw you in with the premium currency. 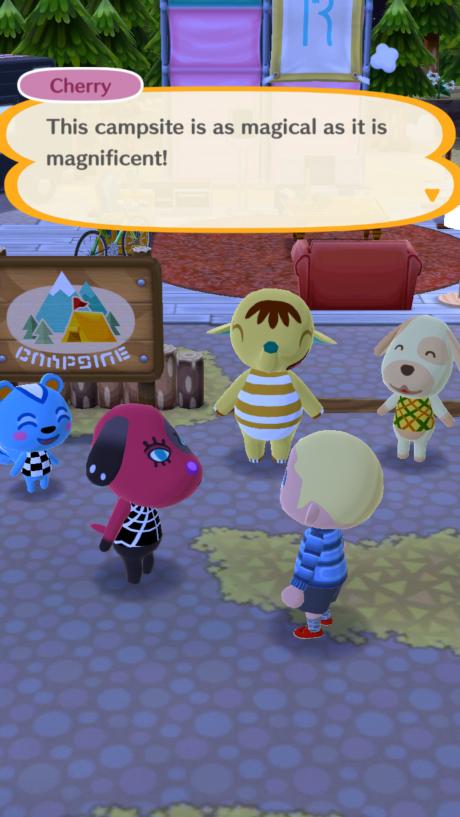 However, I have to say, I actually quite like this model. As I said, the game gives you plenty of Leaf Tickets for free so you can understand how they can be used and how useful they are, but also, you won’t need them at all in the early game, they can be a complete afterthought. The game literally gives you hours upon hours of fun and entertainment before making you consider ever spending a penny. And that’s a wonderful pricing model, much better than the Animal Crossing gacha game that we all anticipated.

I’ve played a fair amount of Animal Crossing Pocket Camp, and unlike most mobile games, I know that at this point I’m going to return to it. While other similar free-to-start games give you a reason to invest money in them and long wait times after a single day, Animal Crossing Pocket Camp didn’t give me a reason to invest any cash at first, and heck, it still hasn’t. I’ve got two crafting spaces with Cyrus, costing 80 tickets each, extra inventory space, have paid for Shovelstrike Quarry once, and bought a couple of fishing nets, and I’m still sitting on top of 190 Leaf Tickets - and these Leaf Tickets cost 99p/99c to purchase 20 of. Twenty.

I’ve got nearly 10x that amount, after spending plenty of them already, and I still have quests to complete that will offer me more. It is absolutely the case that once the goals have been completed it’ll become a more difficult game that’ll require a bigger time investment, but the fact is, I’ve already spent far more time in Animal Crossing Pocket Camp than I have in any other mobile game in recent memory. And if, after fifteen or twenty hours I finally drop a few pounds on in-app purchases, that won’t be a bad investment, considering the time I’ve already spent in the game.

Reviewed on Android. You can download the game on Android devices or iOS devices.

Animal Crossing Pocket Camp is definitely Animal Crossing, but it’s also definitely a mobile game. Not bad for twenty or thirty minutes a day, but it won’t keep you plugged in for hours like a proper Animal Crossing game would. Then again, for the low-low price of free-to-start, it’s really hard to complain about the investment.