American Fugitive is a strange beast. From the very first time I laid eyes on the game, I knew I liked it. In my preview of the game, I labelled it as "a game I never knew I wanted" and that's slightly off, I like my open-world crime fests, particularly so when the world has a good amount of content. Fallen Tree Games have made sure that American Fugitive has this, aiming very high for the first premium title of such a small studio. I can't fault ambition, but it always leaves the question as to if this ambition has been met.

Let me make one thing clear right away, avoid this on the Switch. The review copy I was provided is for the Nintendo Switch. While I have enjoyed it, I've had to buy it on the PC for two simple reasons. I wanted to test the performance compared to the Switch and also just get a smoother experience. The Switch version isn't riddled with issues, I won't go as far as to say that, but it's about as stable as the prime ministership and presidency of two blonde mop-headed muppets who are woefully inadequate for their jobs. In any session of decent length, the game will find a reason to encounter an unknown issue and crash. Oh dear.

This is a shame because actually playing the game, when it wants to, is fun. This is an (almost) top-down game very much in the vein of the original Grand Theft Auto titles, just that this has modern sensibilities and lovely, crisp, visuals. Such modern sensibilities are areas packed full of content and things to do, including finding a number of paintings to steal throughout the world or stashes to loot, once you've actually worked through clues in the world to find the combination of the safe. Or, in the case of some stashes, found the mythical shovel that allows you to dig.

Actually, having looked at some open-world games maybe it isn't such a modern sensibility, just actual good game and world design. Redrock County, the setting of American Fugitive, does have a decent amount of random side-busywork, from the aforementioned paintings and stashes, but also checkpoint challenges and stunt jumps. Do these jumps and checkpoint challenges fit in with the narrative? Of course not, I can't think of a single game where they ever have. Is there an incentive to do them other than ticking off a box on a list or extra in-game cash? A little, you get an upgrade point.

That's the real reason to go hunting for stashes and doing the side elements, the ability to upgrade Will Riley's abilities. Will, being the bloke you control, is naturally somebody who needs to do a bit of self-improvement in the only way video-game folks know how to do. He gets upgrade points and spends them on himself. Some of them are incredibly useful as well, particularly such as increasing your carry capacity, stamina and one which gives you a magical metal detector that detects stashes - even those in somebodies living room.

In fact, in a rare occurrence, there aren't any useless upgrades. Each and every one is useful, some more than others naturally, but they're all worth having. That's primarily because the game feels tight, it's not sprawling beyond what it needs to be and adding in the unnecessary for the hell of it. Can you swim? Sure, a bit. Are there submarines? Nope. Fly? Nope. You can hop on a train though.

Also, you can break into almost every single building in the game in the games robbery system. Find a house, why not break into it by picking the lock or smashing a window? Be careful not to make too much noise though, somebody will call the cops. You're told how much time you have before they arrive and how long it takes to search a room but being pressed for time makes it difficult.

The best option may be to just knock out the homeowner if you see them out and steal their house key - no cops at all if there are no witnesses. If you happen to run into somebody in the house though, or if you're robbing a store, you can actually hold them up - with each weapon having their own success percentage. If they're sufficiently scared, you can let them go or just tie them up - again, each item has its own chance of success. It's this, based in a bit of realism, which I like about American Fugitive.

Continuing the realism, you're on the run, so you're hardly going to be setting up an import-export business. The story is based around your quest for revenge and any jobs you do that aren't leading in that direction, Will is quick to call out those giving him the jobs - especially when they don't seem to be holding to their end of the bargain. However, the setting comes a decent level of anonymity. No mobile phones means if you commit a crime and get a wanted level, but get out of sight and change clothes or car, they're not looking for you in whatever you're wearing or driving now. It's actually pretty damn intuitive.

If only the same could be said for the rest of the wanted system because I do have some problems with it. Mostly, I'm fed up to the back teeth of being blamed for everything. I'm honestly starting to think this is a racing game, the number of times I get penalised for things that aren't my fault. Get involved in a road traffic accident, one star. That's fair enough if you crash into somebody, not when they crash into you. Drive too close to a garden and scare somebodies pet rabbit, call in the S.W.A.T. It doesn't help that cars will just pull out in front of you or crash into you all-too-often.

If I do have one issue with the link to realism, it's that dying is incredibly punishing. I've had moments where I'm holding five paintings (there are thirty in the game) and I'll be damned if I know where I found them, but I've not yet sold them to the dealer. I've died and I'm back with bugger all. Well, I've got a little, but only because I've put points into the upgrade that gives you an outfit and a melee weapon when you respawn.

Still, I can't complain too much, I should just not die, right? Frankly, the police are pathetic in this game, even on a five-star wanted level. It's easy to lose them if you're in a fast enough car, all you need to do then is just drive off of the road somewhere and hide, the stars just tick down. Even better, just go find a garden out of sight, put on some ladies frilly knickers and dress and bam, the bearded ginger bloke in ladies undergarments is not suspicious at all! I do like that about the game.

Another thing I like is the story. As I've said, Will actually challenges people who are giving him seemingly pointless busy-work and the game does make it all fit in as best as possible. The story is actually pretty compelling, going through a few twists as it covers corruption, conspiracies, crime and more. It's a shame that the missions don't have enough breadth of depth to support the story. Too many are just a case of go to a place and steal, or kill something. Every now and then you'll get something a little different, but I'd say 90% are very repetitive.

Still, despite any misgivings I have with the wanted level and AI, as well as the repetition in story missions, actually playing American Fugitive is fun. There's a decent amount to do as you explore the game, with a pretty interesting system of stealing or holding up places. The game has a compelling story with some pretty interesting characters too. All this for a low price of around £18/$20.

All things considered, I do recommend American Fugitive. It's a fun game to play and a good throwback to the GTA titles of old. Yes, it doesn't have the pure mindlessness of those titles, but that's hardly a bad thing, thanks to the benefits it brings. I just need to re-iterate the fact that it isn't stable on the Switch. You'll still enjoy it, but you'll have some irritation when the game craps out at the most inopportune moments. Buy it on the PC, PlayStation 4 or Xbox One. 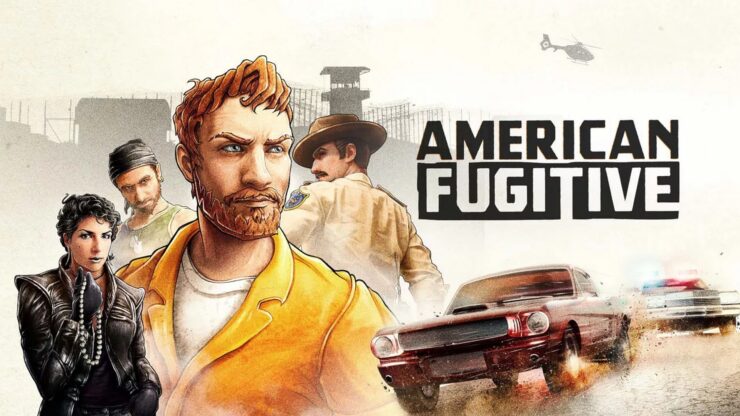 American Fugitive is a fun romp through a colourful, top-down GTA-inspired open-world crime-fest. While the game has some issues, such as repetitive missions, as well as stability problems on the Switch, it doesn't stop it from being an all-around fun and engaging title when you're actually playing. The freedom to explore a world of a decent size where there's actually a fair bit of content to go through, including side-elements like finding stashes, doing stunt-jumps and time trials. Is this the next GTA? No, nor was it going to be. Is it a fun, engaging and altogether decent title at a very reasonable price? Most definitely.