If RDNA was a small step in the right direction then RDNA2 is a GIANT LEAP. I cannot overstate the improvement upon all previous generational launches Radeon has delivered here with the Radeon RX 6800 Series and now with the RX 6900 XT. Extensive software support, multiple clocking profiles (despite us only having been able to test in default Balanced Mode for now), their best cooler design ever, but there is a big thorn in its side at this price and performance tier, we'll get to that in a moment.

The cooler that Radeon designed here is simply fantastic. If you can get past the big ol red ring you'll see a beautiful card that will match almost any build and is quite traditional yet carries quite the flare to it. The fit and finish are bar none the best they've ever delivered with a solid metal design and a nice powder coat finish that feels as premium as it looks. The triple fans are adorned with a support ring to maintain their shape and the silver accents are quite a nice touch. Hot and Loud? Far from it this time just like with the RX 6800 Series. The RX 6900 XT was quite surprising in that regard as I did expect it to break away from the RX 6800 XT and become noisier and hotter. Nope, just a hair warmer from running the full 80 CUs of the Biggest Navi packing card. 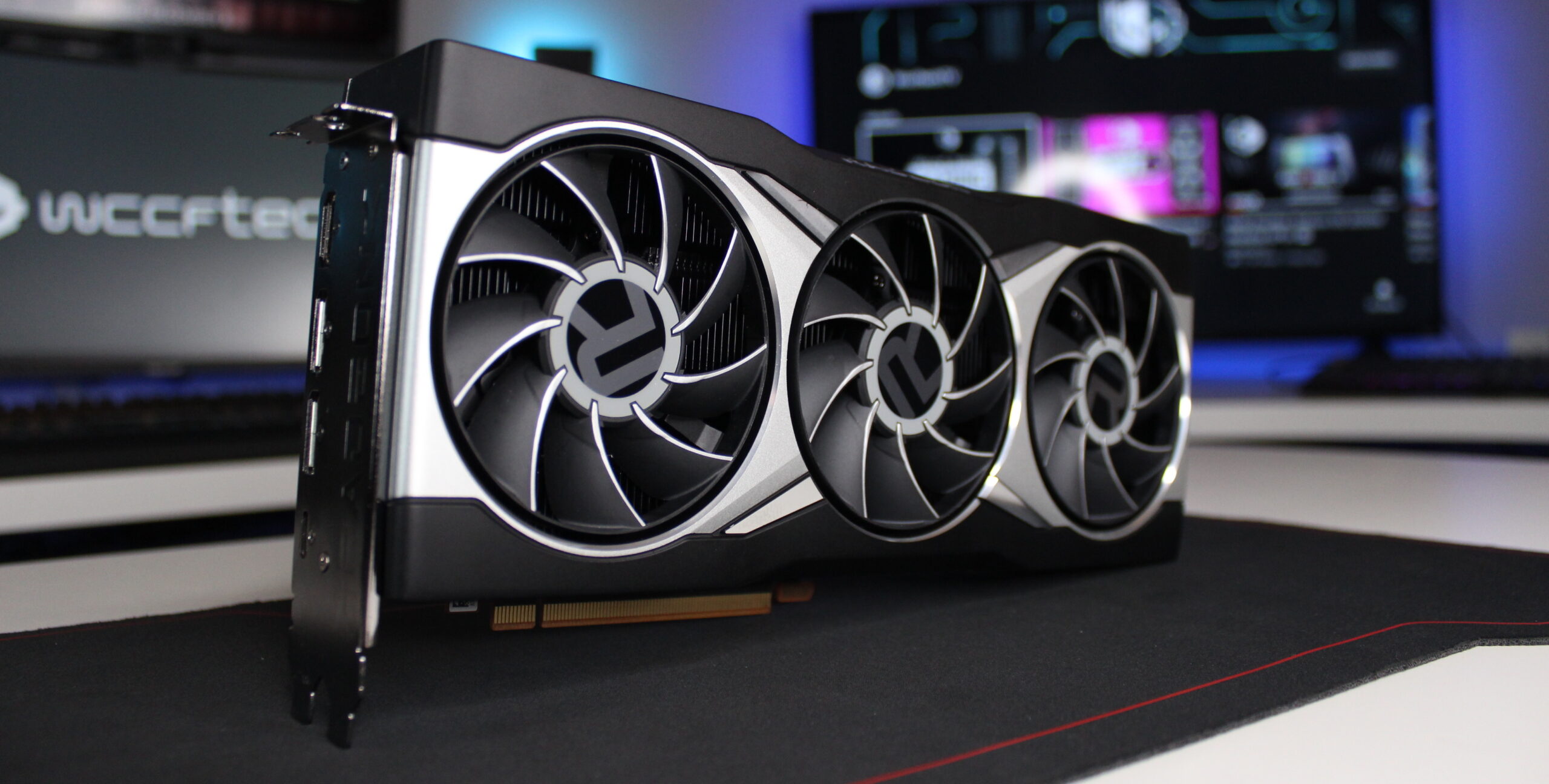 Legacy pipeline performance is astounding, the RX 6900 XT is an absolute monster at 1440p and Ultrawide 1440p gaming. And while it falls behind often to the RTX 3090 at 4K gaming you can close that gap and sometimes surpass it by pairing up with a board that supports Smart Access Memory (SAM). But SAM also opens up an Achilles Heel that almost slipped past me, if you pair the RX 6800 XT, at 65% the cost, with the same configuration you'll find it often matching or beating the RX 6900 XT. If you want the absolute package and get every ounce from the RX 6900 XT you're going to want to be on AMD's latest Ryzen CPU and motherboards, do not sleep on that. But If you are able to find them at MSRP you can get a reference RX 6900 XT and a Ryzen 7 5800X for practically the same asking price as the RTX 3090 alone.

I can't go over performance without mentioning DXR and the likes of Ray Tracing performance. Ray Tracing is only gaining traction and is far from going away. In this ultra enthusiast space, the customers typically demand their purchases deliver on every front. RDNA2 is capable of supporting ray-traced effects, but it's also falling in line with Turing in the performance bracket. That would be fine but Turing is a 2+-year-old architecture that has been retired in lieu of Ampere at this point. But, they've come out swinging on their first go at hardware-accelerated ray tracing support and for the most part, it works, there are issues with Watchdogs Legion and some oddities in Boundary. The issues in Legion are known and they're working to correct it but the overall performance, outside of shadows where the accuracy is less important, is quite lacking against the current RTX 30 Series with often the RTX 3080 overtaking the beastly RX 6800 XT. And with no firm release window for FidelityFX Super Resolution you see the RTX 3070 take a commanding lead when NVIDIAs own DLSS is enabled.

One area that the RX 6900 XT card certainly delivers on is power draw. It stays within its rated total board power at all times and that was verified by using the PCAT hardware provided by NVIDIA. So strong power performance and that translated straight to excellent thermals. AMD alerted us that up to 109C was normal and within spec for the Hot Spot but we stayed far from that in our testing. The RX 6900 XT was quite impressive on that front, to say the least.

The launch of RDNA2 and the RX 6800 Series brought Radeon back into the High End as a force to be reckoned with, the RX 6900 XT is the polished cherry on top. It delivers just what a high-quality binned product should, better performance and better power efficiency within the same envelope, but this one is going to cost you and it's not cheap. At $999 you're getting a top tier full fat Navi 21 die, and that gets you better performance per watt and an additional 8 CUs over the RX 6800 XT. This one is for the ones who demand the absolute best that Radeon has to offer and it demands the premium. I want to reiterate, if you're going to buy this one, go all out and pair it with a Ryzen 5000 Series CPU and 500 Series Chipset or you're just leaving performance on the table.

We'll be venturing into these claims soon enough, we also forgot to mention the RADEON logo is RGB on the RX 6900 XT (and the RX 6800 XT now) surprise! 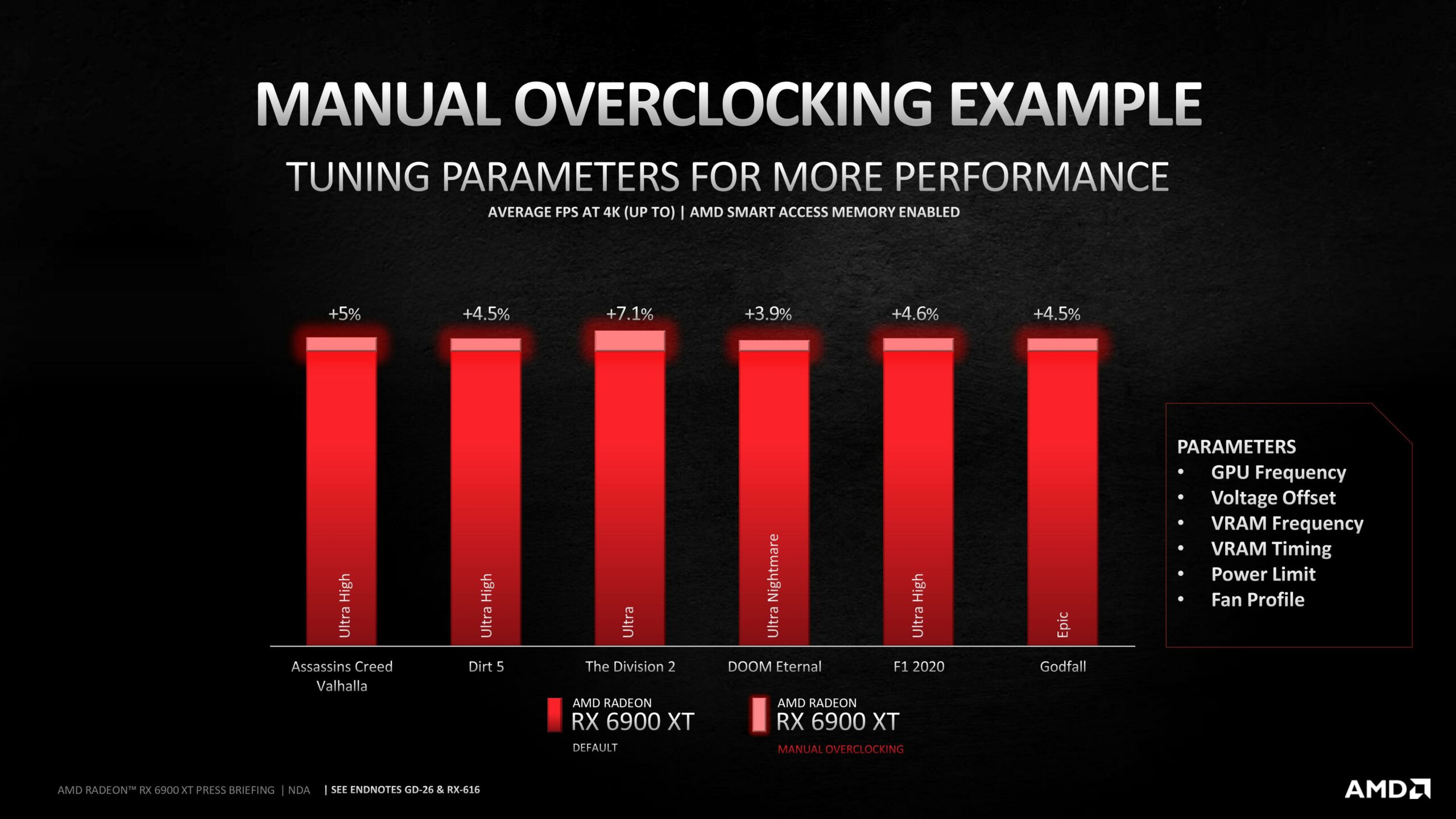