You Will Have an Amazing Galactic Adventure in Galaxy Run

Galaxy Run ($0.99) by Spiel Studios comes as a new side-running platformer with the purpose to win our competitive side taking you out of this world - literally! I'm telling you this because the game takes place in space, where will be playing as Rez who is trying to get home after his spaceship crashed against an asteroid. But to get home we need to go through a series of over 360 levels, it is your job to get him home. 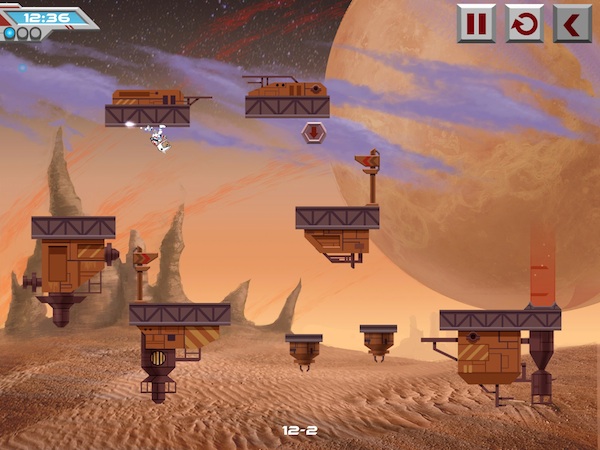 Galaxy Run gives you the job to take Rez home, but is not going to be easy.

This game includes a various elements you can use but there is only one control, which only involves tapping anywhere on the screen of your phone or tablet. Despite this limited controls, Galaxy Run is still quite engaging and extremely challenging.

At the very beginning of any level you need to start running, which you only need to do is a tap of the screen. After this, you may start tapping the screen to make Rez jump. Also, depending on the different tools that are used, tapping may serve another purpose making things a little more easy. As an example if you attain a double-jump token, you could tap twice on the screen to make Rez jump two times going higher. Despite the only control involving the tap of a finger, this can help you to be saved a lot of times.

Each level consists of almost the same style, various platforms that Rez will have to jump in order to finish after getting to the blue gate at the end. But along the way, Rez may have to jump over sharp spikes, making you be more cautious of speed strips that will make him run faster, swing on hooks on different places or simply just avoid other type of obstacles. 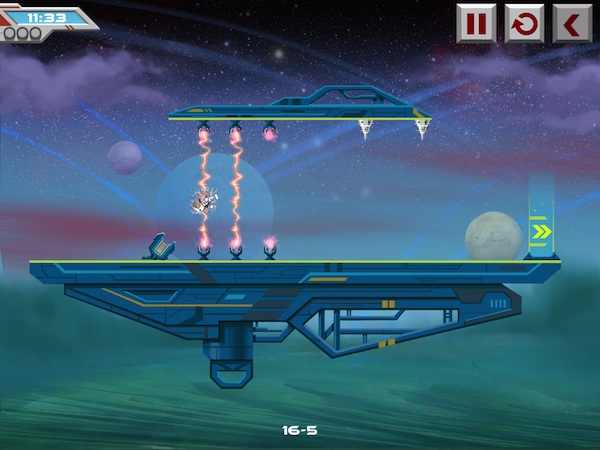 Some of the abilities are difficult enough to master on their own, making the combinations of multiple steps can be almost impossible to complete. The tricky part gets when you once get used to the very accurate physics of Galaxy Run, each level becomes less difficult taking less attempts to complete them.

If you found yourself having difficulties to complete a level, there are three types of power-ups available for you to use anytime. The mention power-ups consist of a ghost mode, which will make you indestructible, a slow motion mode, which will slow down Rez' speed, and the option to skip a level. Galaxy Run already comes with three of each power-up, you can obtain additional uses through in-app purchasing.

Although Galaxy Run can be frustrating at times on your first minutes until you dominate it, this game should be able to satisfy any fan of platformer games.

You can purchase the game for your iDevice by going Here.