A Way Out Review – A Ceaselessly Creative Co-op Caper

Movies are usually best enjoyed with other people. The action scenes are more exciting, the jokes are funnier, and the tear-jerking bits are more moving when someone is experiencing them with you, and yet, most “cinematic” games like Uncharted or Tomb Raider tend to feature single-player-only campaigns. A Way Out looks to shake up that status quo.

Created by small Swedish developer Hazelight Studios, A Way Out is a unique split-screen co-op cinematic gaming experience. In fact, the game has to be played with somebody else – there’s no single-player option available. The game’s director, Josef Fares, made a name for himself at last year’s Game Awards with his viral “f*ck the Oscars” speech, but is his swagger justified? Does A Way Out’s split-screen gimmick and ambitious story work, or does the game need to be locked away? 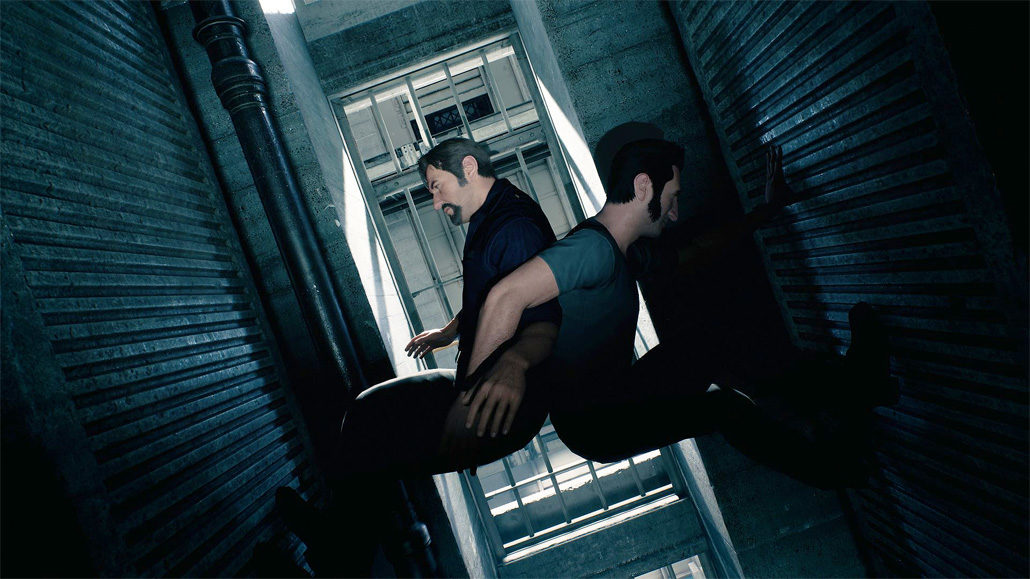 A Way Out casts you and your co-op co-conspirator as either Vincent or Leo, two men who have been locked up for crimes they didn’t commit. Vincent, the more level-headed of the two, was framed for his brother’s murder after getting entangled in a money-laundering scheme. Leo, an impulsive career criminal, also got pinned for a murder after the sale of a stolen diamond went sour. After Vincent saves Leo from a jailhouse assassin, they discover they were both set up by the same guy -- a Tony-Montana-like maniac named Harvey -- so they hatch a plan to break out of prison together and exact their revenge.

The plot is typical crime drama stuff, but Vincent and Leo are better-than-average characters. They initially come off as a standard straight arrow and tough guy archetypes, but eventually reveal hidden depths – Vincent can be surprisingly reckless at times, and Leo is a soft-hearted family man beneath all the bluster. A Way Out follows a satisfying arc, believably building Vincent and Leo’s bromance throughout the course of their adventures, before hitting players with a gut-punch of a final act. I wouldn’t be surprised if Hollywood snaps up the rights to A Way Out, as it would make a pretty solid buddy action flick. 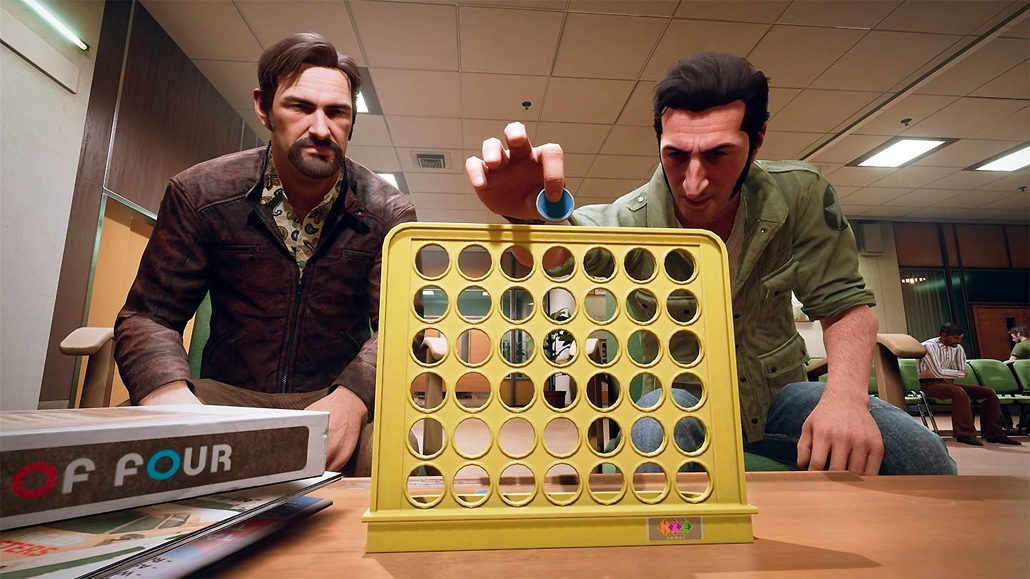 A few technical hiccups aside, A Way Out could easily pass for a mid-tier triple-A game (think, say, Mafia III or Prey). Sure, it doesn’t look Uncharted or Assassin’s Creed good, but the game was made by a team of around 40, not 400. On the audio front, the cinematic score does a nice job of setting the tone and most of the voicework is solid, despite English clearly not being some actors’ first language.

A Way Out’s split-screen mechanic takes a few minutes to get used to. It’s fairly easy to accidentally focus on the wrong screen, and there are occasional awkward moments, like when Vincent and Leo initiate separate conversations at the same time. Thankfully, it soon becomes second nature, at which point, the game starts messing with the rules. The screens will change size and orientation depending on the action and importance of what each character is doing. Sometimes the screen will split into three to follow somebody other than Vince and Leo. A Way Out doesn’t merely revive the art of split-screen multiplayer, it finds fun, innovative new things to do with it. 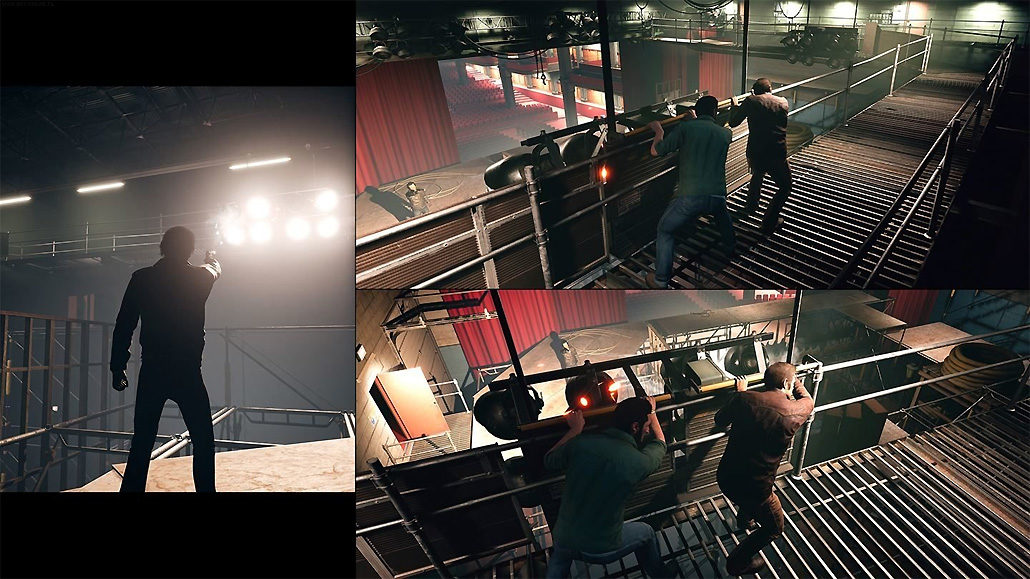 The game’s creativity doesn’t end with its clever split-screen tricks. A Way Out is remarkably varied, serving up a steady flow of new concepts and styles of play. From moment to moment, you can expect to find yourself smuggling key items past prison checkpoints, stealthily taking down guards, staging a gas station stick-up, or engaging in a heart-pounding foot chase through a crowded hospital. And that’s just a small sampling of what you can look forward to.

Almost all of A Way Out’s assorted challenges make inventive use of teamwork. You’ll have to keep watch for guards as your partner chisels his way out of his cell, get back-to-back to ascend a perilous ventilation shaft, and paddle your way through raging whitewater rapids. Even the simple task of breaking down a door requires coordination. These team up moments aren’t just fun, they help build the story – every time you and your real-life co-op partner have to combine powers to solve a puzzle or best an action sequence, you become a little more invested in Vincent and Leo’s budding friendship. 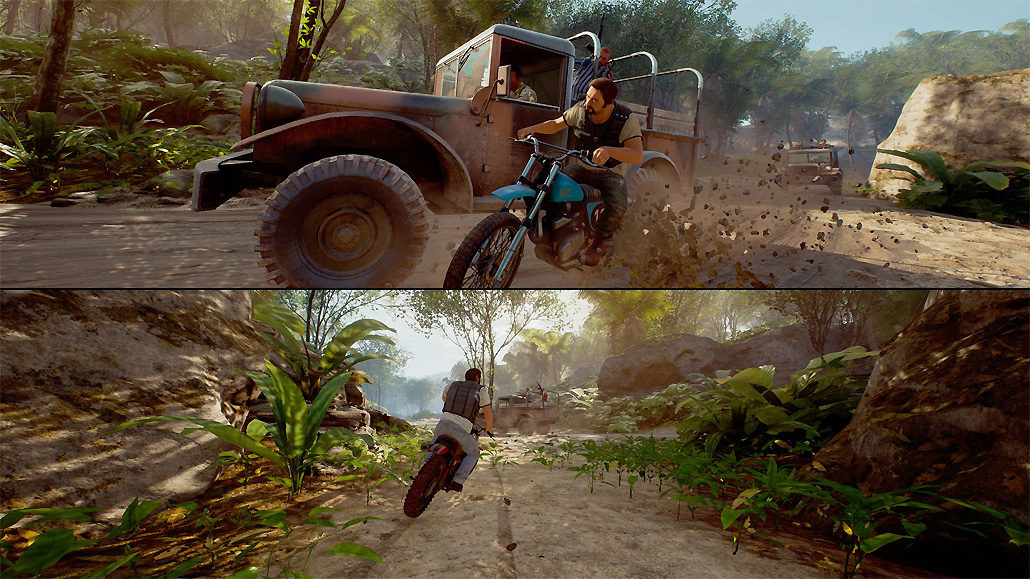 As varied as A Way Out is, it almost never becomes frustrating or confusing. The only time the game falters slightly is near the end when it opts to serve up a series of standard cover-based shooting sequences. These chapters aren’t bad by any stretch, but they break from the “never repeat an idea” tenet the rest of the game adheres to, and simply aren’t as inspired or original as what’s come before. Thankfully, A Way Out rallies with a strong finale, which makes surprising changes to the game’s core co-op mechanics.

A Way Out clocks in at about six or seven hours, which is a fine length for a co-op game. Corralling somebody into playing with you isn’t always easy, and you don’t want to try your friend’s patience (thanks to my wife for working through the game with me while our 4-month-old son napped). Those looking for something extra to chew on can replay any of the game’s chapters, some of which can be tackled in multiple ways. Like a favorite action movie, A Way Out could very well end up being something you regularly pull out for low-key hangouts with friends and family.

This review was based on a PS4 copy of A Way Out provided by publisher EA. You can purchase a PlayStation 4 or Xbox One copy via Amazon.