If you weren't aware, I'm not a film or TV show critic. Now, I've certainly got my opinions about films and TV shows, I could probably talk about them to a reasonable level, I just don't. What I talk about are video games and the things around them, including the engines used to create said games. 3 out of 10 puts me in a strange position where I'm reviewing a cartoon. Well, it's a cartoony-game... a video-toon... I'll be damned if I know exactly what to call it, possibly a Quantic Dream game but better?

Okay, I'm being a little silly there, though not as far off as you may first think. What 3 out of 10 is, is very much like an episodic cartoon that is a game at the same time, only the game aspect is quite limited. What it also is, is an interesting use of the Unreal Engine and one of the reasons that Epic Games are so interested in the project. As a result, all five episodes of the first seasons will be completely free.

Like a cartoon, 3 Out of 10 is short. Having spoken recently to the developers at Terrible Posture Games (Tower of Guns, MOTHERGUNSHIP), this is a conscious decision as they look to change how games can be made and what they can be, even with the delivery of said games. Each episode can be simply watched as a cartoon, should you want to, or you can do some exploration and play a series of minigames that fit within the story and world shown to you.

Between twenty-five minutes to, if you're like me who wanted to gather all of the stars through exploring and doing well in the minigames, around one hour. That's how long each episode will take you. The gameplay sections in the first episode offer a hands-on with an endless-runner that has an end, a press the button at the right time game, a pattern-matching game, and a block puzzle. As well as these are two opportunities to explore the building that the game takes place in.

Everything is smoothly tied into the story of the game. In this first episode, you are Midge. Midge has popped into Shovelware Games for a job interview for the animator position because, unfortunately, the previous animator died from spontaneously exploding. Just from walking in, Midge is hired and gets to work on the studio's current game, which is the earlier mentioned endless runner with an end. It's called Surfing with Sharks

So, I can't exactly say a massive amount without essentially ruining the story and some quite comical aspects of the game. Needless to say that this is the worst videogame company in the world and in this episode they find themselves being protested by people who love to complain over nothing (here, they have a great white shark in their game but call it a tiger shark), so pretty much like real life when it comes to videogames.

Hijinks ensue as they try to figure out how to get rid of the protesters, from cooking them a granola, ketchup & salsa stew to simply talking to the protesters, asking them what their problem is and then Midge saying "If we fix the shark, will you stop being mad?" and the sadly true, but still funny response of "We'll always be mad!" is thrown right back. You'll finally get past this current issue through a perfect representation of how the industry sees people as disposable, as you involve the feral engineering department. It's cheeky, it's funny.

That is the main thing, it's funny. 3 Out of 10 has a cheeky sense of humour with just some random 'wtf' moments popped in. There are so many little jokes to be found when looking around and talking to the characters. You'll also find amusing 'wtf' elements like something living in the fridge or a character's obsession with a certain condiment - I'm told this is a running joke that builds through the episodes, as will some others. You'll even find some little bits of dialogue on the main menu if you just leave it sitting there, as I am while typing out this paragraph.

There's not much else I can honestly say about the game other than it's the first episode of a short cartoon series, just one that's been made with some videogame elements. These elements being the exploration sections and four minigames. It looks like a cartoon you'd see on TV, with just that right level of animation, and the voice acting is fantastic - the audio direction in general is brilliant.

All of this is a bit of a technical feat. Just so you know, I'm done talking about the game in a review sense, we're talking about the development and its release now. So, a technical feat. 3 Out of 10 has been completely developed using the Unreal Engine. When I say completely, I mean everything. There was no use of Maya, MotionBuilder, 3ds Max, or otherwise for the animations. Because it’s all made using the Unreal Engine, every transmission is seamless. Nothing is pre-recorded and it's completely seamless when moving from the cartoon sections to the game.

This is what piqued Epic Games' interest, the fact that something different and unique was being developed using their engine. The engine is used on TV already, such as backgrounds for The Mandalorian and putting crowds into live sports. It's not the first show to be made using Unreal Engine, the animated series Zafari having this honour, but this is a little different thanks to the mixture of a cartoon and a game.

Thanks to this partnership, the game is completely free to own. The first episode is out now and, contrary to how episodic games usually work, the remaining four episodes of the first season will be coming out weekly, the final episode (and consequently what will be a full review of the games) on Wednesday the 2nd of September.

I'm not going to say it's amazing. Since this is something different means it has some issues. The game part of this can be short and it's simply a collection of minigames. The replay value is limited, the story doesn't change in this episode (potentially will riff on features like branching dialogue, etc, in later episodes) but it has some replay value if you enjoy the short, sitcom-style nature of it.

Keeping it simple, 3 Out of 10 is worth your time if you go into it understanding it's something different. It's short, funny and it's an interesting use of the Unreal Engine and completely free. Personally, I'd say it's a good use of thirty minutes to an hour and a great palate cleanser when the boring repetition of the larger releases is getting to you. You can find the first episode on the Epic Games Store now. 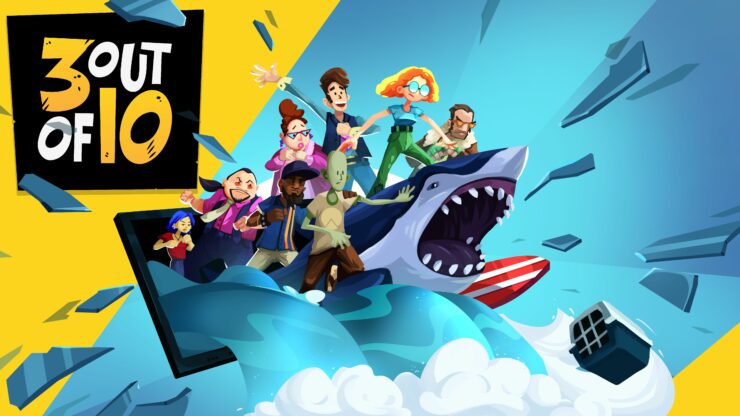 3 Out of 10 is an interesting mixture of a cartoon and a game as well as a show of what can be created using the Unreal Engine. It's a genuinely funny title that offers a great palate cleanser, the first episode only taking between thirty minutes to one hour to complete. While the format will prove different to what people expecting and the minigames and short sitcom-like story offers limited replay value (unless you enjoy the story)