Vanillware's latest adventure is nearly upon us after what felt like a decade of development. The long-awaited 13 Sentinels: Aegis Rim, often delayed and only released in Japan late last year, has been on a number of most anticipated RPG lists among those in the know. While we previewed the time-travelling epic, we were limited to exploring the early prologue acts and a little beyond for each of the 13 Sentinel-piloting students. Now that the full release is upon us, I can share my complete thoughts on the rest of 13 Sentinels: Aegis Rim. 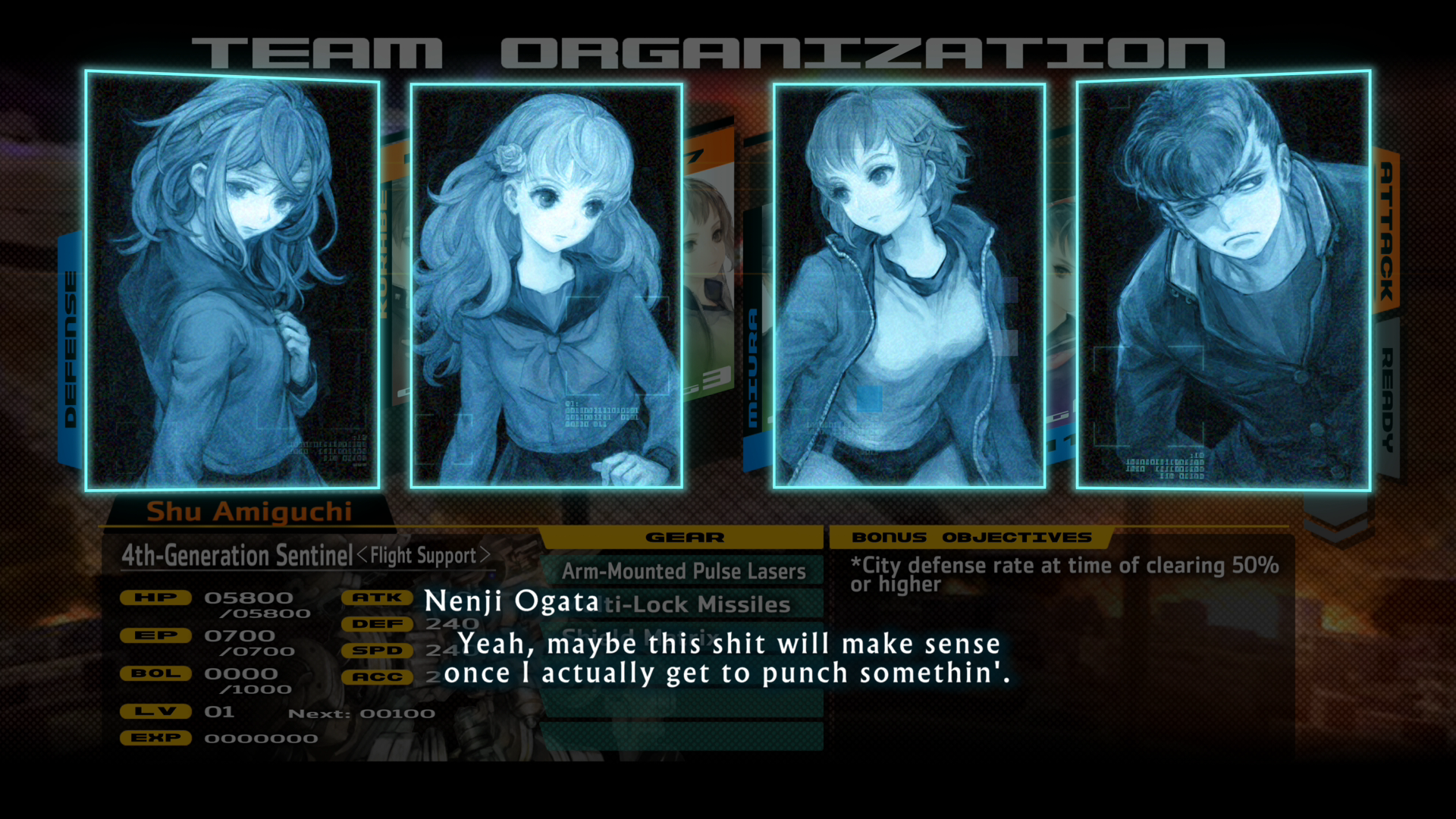 Told across thirteen character perspectives, 13 Sentinels: Aegis Rim is the story about a class of high schoolers gifted with then ability to pilot giant robots and fight against invading kaiju. Only, it’s never as simple as that. Through each character’s perspective, the story of invasions and protecting one’s homeland takes on a different view. At times, the story is told with a jingoistic viewpoint where the might of Japan is represented by the Sentinels themselves while the kaiju invaders could be anyone that threatens that way of life. I only bring this up because 13 Sentinels makes a point of drawing the same parallels through references to World War II and the atrocities performed with the atomic bomb quite clearly in one character’s storyline. I never could quite shake the thoughts that perhaps this whole story was an allegory for the changes Japan went through over the past century in real life but alas, I’m not informed enough to truly explore those themes in a critical review of 13 Sentinels: Aegis Rim. 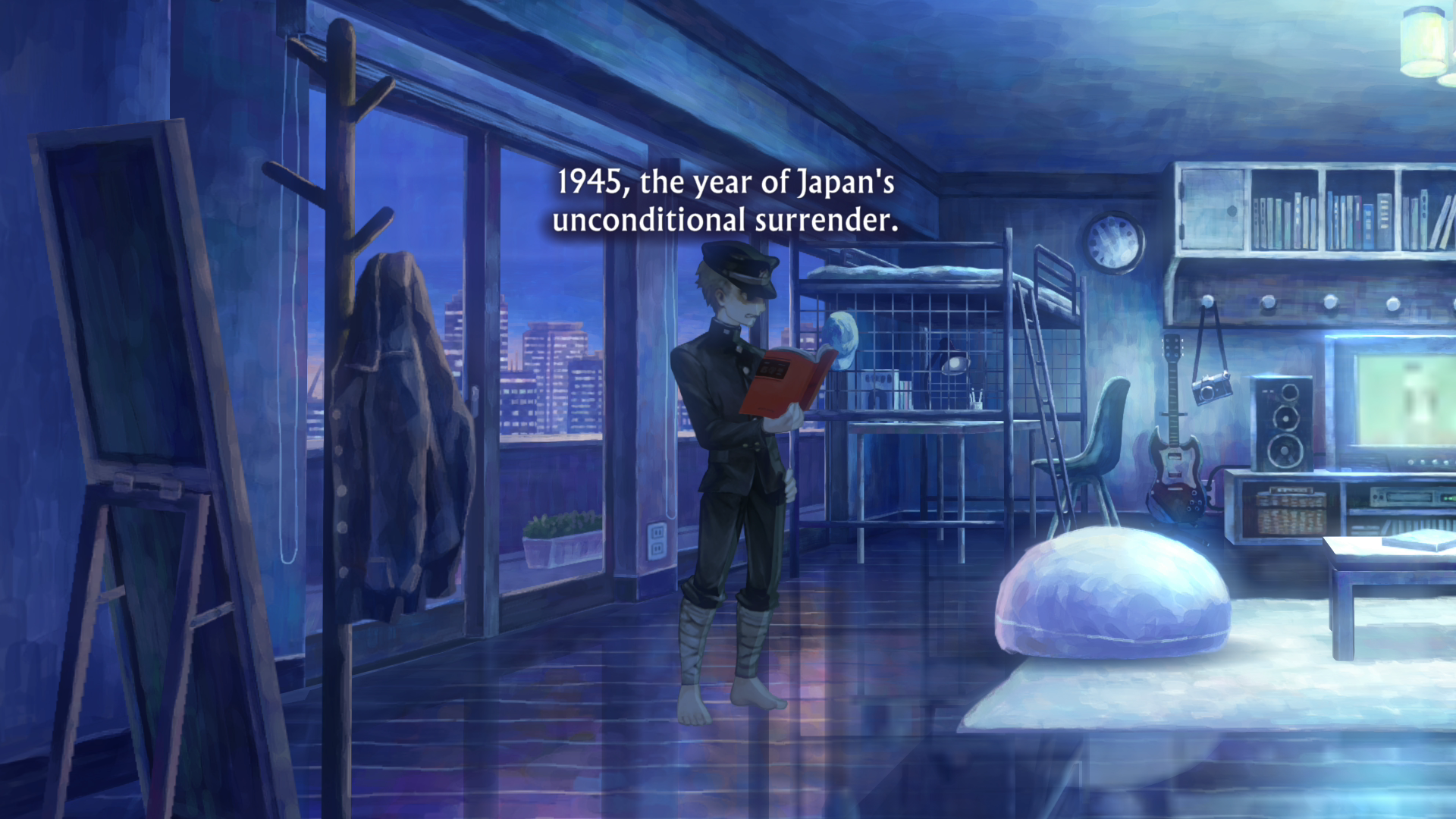 In fact, there’s quite a lot that I felt lost on as the story proceeded. The multiple timelines, juggling who was in which time period with which other classmates, terms like ‘innerlociter’ or Hijiyama’s fascination with ‘hemborgers’ thrown around like common knowledge and more all layer upon each other as the story carries on. This is one story where the player might need to keep a journal at their side just to make sense of the narrative through line.

The story segments of 13 Sentinels: Aegis Rim take on a different form of gameplay from visual novels and adventure games but not by much. Each character can back and forth across the 2D plane of their given stage and converse with the few other characters in each area. New ideas and concepts are added to an internal thought cloud that compiles the key words and items for each segment. Any time a player is stuck on how to proceed in their given story, they can internalize their thoughts and dwell on a given topic, often shining a bit of light onto the subject and giving the player some idea on what to do and where to use that item. 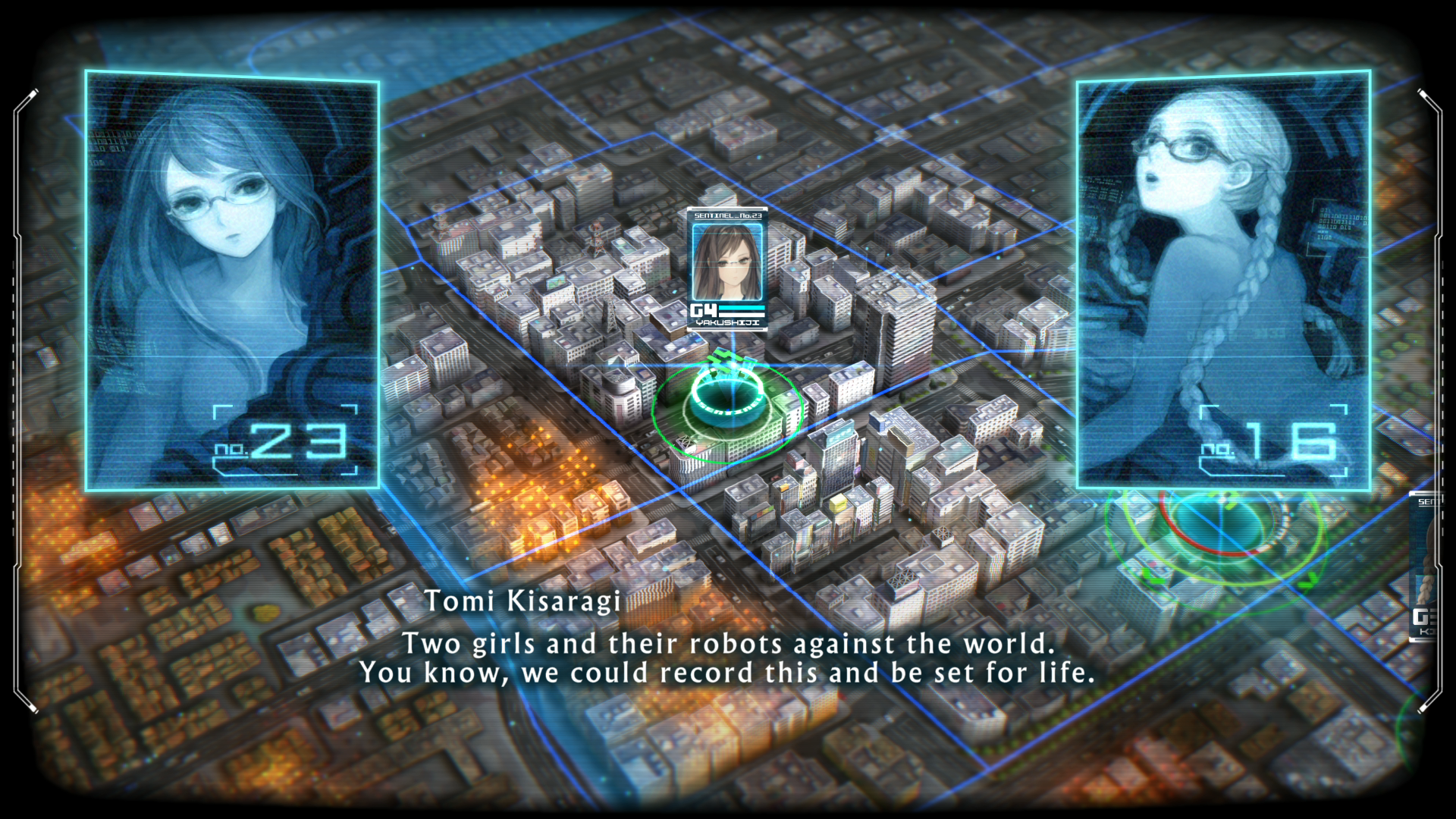 There’s never a wrong answer to how to proceed in each story segment of 13 Sentinels: Aegis Rim and many paths will branch out depending on which items are used or which character you speak to. A roadmap automatically fills in as you progress through each character’s storyline and you can see exactly where the path will diverge, which key words are needed to proceed to the next junction, and so forth. At numerous points throughout the story, you’ll hit some form of roadblock and either need to proceed past a certain other character’s chapter, clear a certain stage of the battle mode, or get enough characters past an arbitrary story percentage threshold. Only rarely will you get to continue on the same character’s storyline for more than a chapter or two before 13 Sentinels puts up one of the roadblocks and forces the player to start reading through another character’s storyline. These roadblocks certainly make sense throughout the narrative as often there’s a major revelation or path being crossed that would only make sense through that other character’s eyes.

Vanillaware knows that the story would likely get lost on the player as they're jumping from character to character across multiple timelines. To rectify this, one of the final plotlines that players will experience on the way to the final battle almost entirely consists of recapping the various storylines and providing a narrative throughline that lays things out as part of the larger interconnected story. Nearly everything happens for a reason within the converging timelines and even the most harmless of McGuffins feeds into the larger narrative if you pay close enough attention. 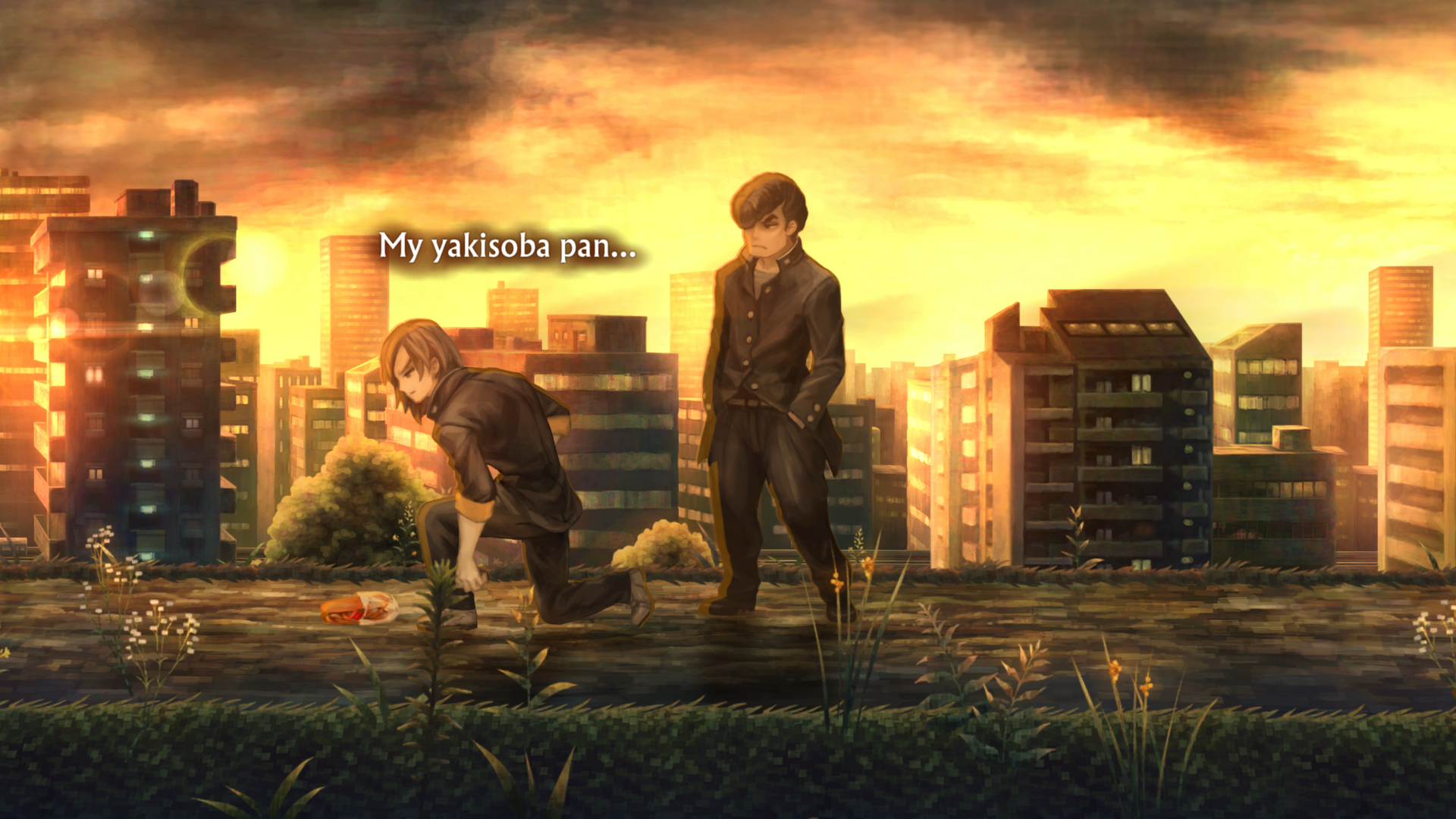 I’ll be completely honest: as I approached the finish line for each storyline and sent each character off to the final battle, I was anticipating the story’s finale and not for the best of reasons. I found myself getting detached from the story as I entered the final chapters of the last couple of characters whose stories were yet to convene. This was somewhere around the fifty to sixty hour mark, although I can’t speak to the precise length as I played much of the story through PS4 Remote Play from afar or when winding down before bed.

There’s certainly an intriguing tale beneath all of the trappings of high schoolers piloting giant robots but the amount of time it takes to discover layer after layer to the tale does have an adverse effect on the playthrough. This is one tale that I’ll be happy to have played the one time and then never touch again. 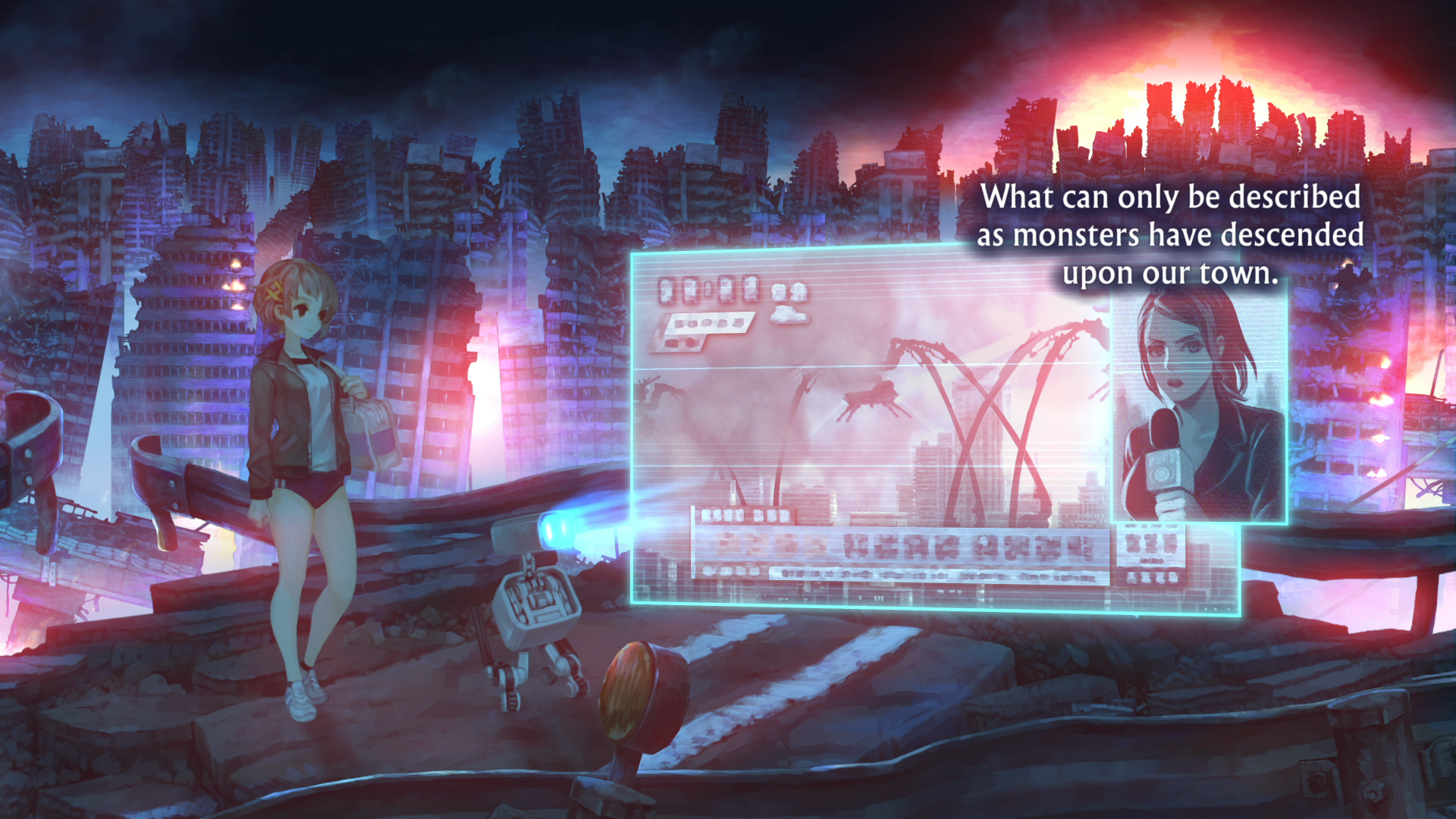 13 Sentinels: Aegis Rim could completely cut the combat aspects and remain about as perfect as a story Vanillaware could tell. By relegating the kaiju encounters to their own separate menu, there isn’t really much way to sync the encounters to the story. For the most part, these are completely standalone save for the times that they’re required to progress the story and vice versa; some later combat stages are locked until you progress far enough in a particular character’s story.

These combat missions are largely the same, only varying in enemy types and side challenges for additional rewards (typically involving restrictions on which pilots you can sortie). You’ll bring along up to six pilots to control in your party while the remainder are placed in defense mode around the terminal in each battle. Victory hinges on either defeating every kaiju that attacks or surviving long enough for the terminal to emit a pulse that automatically disables every enemy on the battlefield. 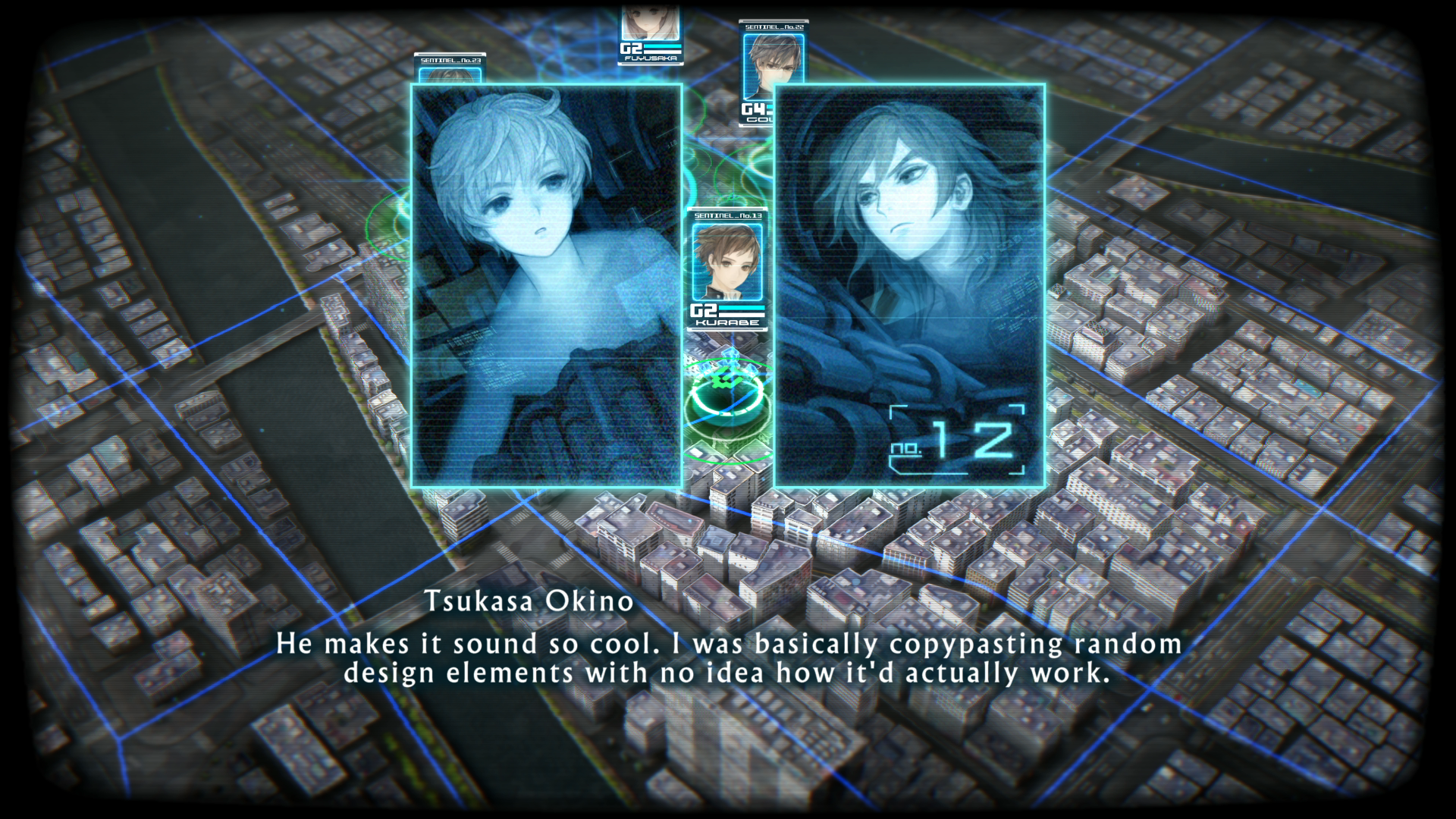 Calling 13 Sentinels: Aegis Rim’s combat ‘tower defense’ is perhaps the simplest way of expressing the direction Vanillaware has opted to go for. As enemies continue to spawn in and move towards the terminal in your city, you can issue commands individually to each of your six pilot candidates who can accept orders and move out independently. While there is a bit of positioning to your attacks and moving to intercept the enemy forces, 13 Sentinels still plays like your traditional Active Time Battle (ie: Final Fantasy) JRPG.

Turns operate on a constantly refilling action gauge that once filled allows the player to move that character, issue an attack, defend, or recharge their ability points. Each pilot can bring along a certain number of weapons and passive abilities to battle, dependent upon which generation of sentinel they’re piloting (and each character has some unique passive abilities to upgrade as well). The weapons themselves have seemingly endless ammo, charged only by the student’s EP that recovers gradually over time or when defending for a turn. 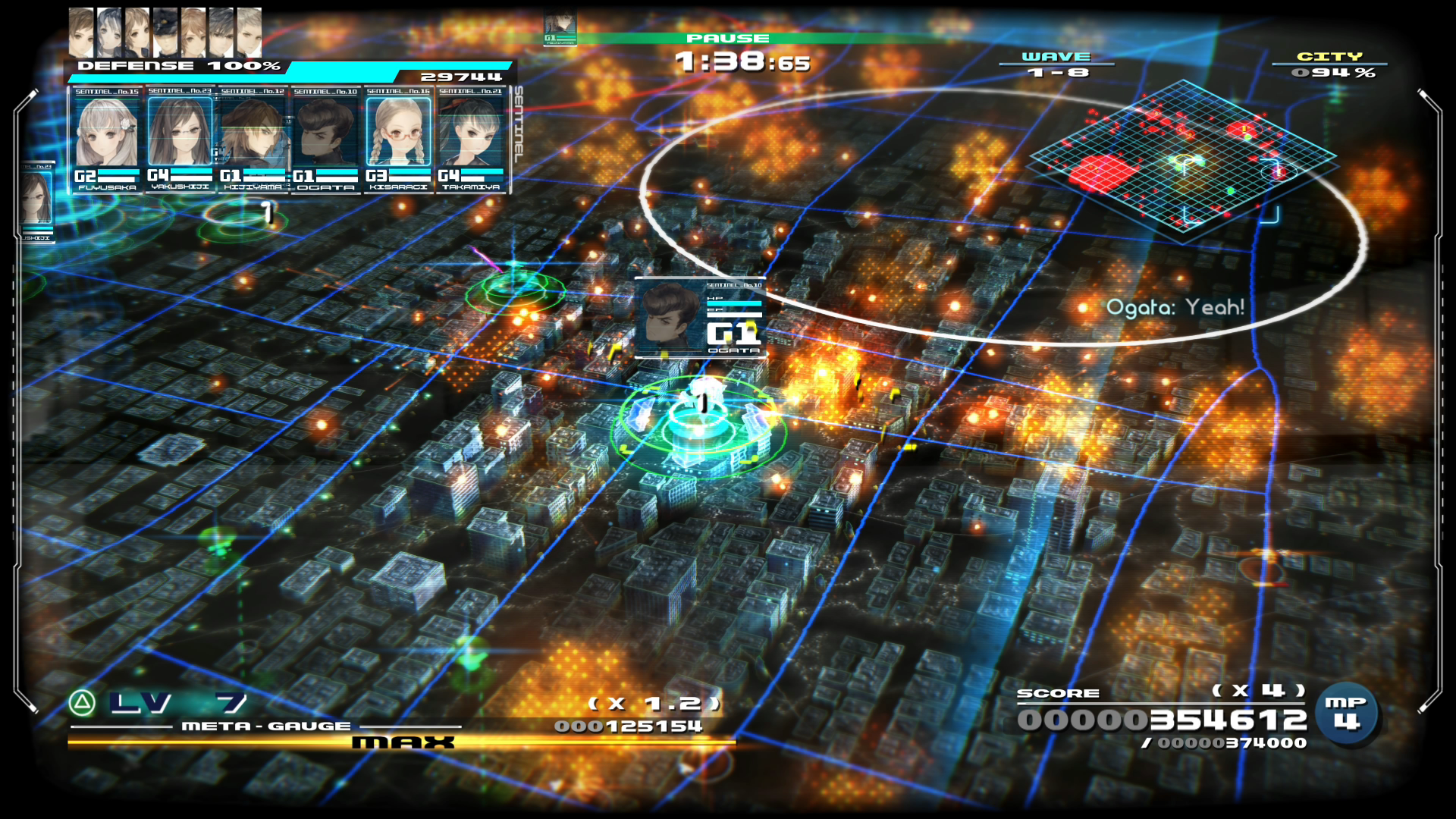 If you aren’t feeling up to the combat, you can drop the difficulty down to casual and bring along all of the fourth-generation pilots. Each of these sentinels get the ability to spawn a number of Interceptors, autonomous drones that will automatically fly around and attack enemies. Not only can Interceptors target both ground and aerial forces but they can last for a majority of the current mission. Just spawn them in with each pilot, defend when their turn comes up, and wait for the victory splash screen. There are a few missions that require using different generations of pilots and these ones do require a little bit more effort if you want all of the victory rewards but for 99% of 13 Sentinels’ battles, you can just spawn in those Interceptors and put your controller down.

My final thoughts on 13 Sentinels: Aegis Rim changed as I played through this lengthy sci-fi campaign and found myself exhausted by the time it was finally complete. The combat segments do little to add to an otherwise compelling narrative and the final product perhaps could've been better paced without them entirely. Nevertheless, 13 Sentinels: Aegis Rim has been well worth the wait since its first unveiling so many years ago and can rank up there among Vanillaware's best works, at least in parts rather than its whole.

13 Sentinels: Aegis Rim is a riveting tale of high school students, the giant robotic Sentinels they pilot, and a battle against invading kaiju across multiple timelines. This Kamitani-directed JRPG would have been a better read without the cumbersome addition of combat to distract from the plot.