Games have an undeniable fascination with war, and yet despite that, so few steps away from the glory of multi-kills and frontline shooty bangs. Recent AAA titles have attempted it with Call of Duty: WWII and Battlefield 1, but these still can't reconcile their poignant messages about the horrors of war with racking up big killstreaks in the multiplayer. 11-11: Memories Retold is very different.

Instead of showing the glory of war, big explosions and joyful victories, 11-11 tells the story of a war in which there is no real victor, just people left behind, and changed forever. It takes us through the tale of Harry and Kurt, two soldiers on opposing sides of the war, neither with any real personal reason to be there.

11-11: Memories Retold – A Talk With Aardman Animations on Their New Game

The game has been developed by Digixart with the legendary British filmmakers Aardman at the helm of the game's narrative and art design. Aardman's experience with making impactful and entertaining stories shines through in 11-11: Memories Retold, and the Digixart staff - that have worked on titles such as Valiant Hearts - do a great job of bringing the story to life.

Harry is a Canadian, pressured somewhat into the war to impress a girl and take photographs for a charismatic Major of questionable morals. By going to war and taking pictures of soldiers on the front lines of battle, Harry will have his pictures in the newspaper and be able to return with glorious tales from the battlefield.

Kurt meanwhile is a German engineer, another man who doesn't much care for the war itself or the ideals the nations were fighting for. Instead, he finds out his son has gone missing in battle and with little regard for his own life - or the feelings of the family he leaves behind - Kurt joins the army, in hopes of finding his son.

Neither man hates the other, and neither truly wants to fight in a war. Which is why, when an explosion traps the pair of them underground, they freeze, unable to do battle. Instead they learn to coexist, and despite the language barrier, they build a bond and a friendship.

The two protagonists and the premise are as important as any other aspect of this game because, of course, it's a narrative adventure. No, this isn't like Telltale Games' formulaic titles, instead it's a linear story which flicks between Kurt and Harry's locations and stories. We hear the character's inner monologues explaining their thoughts and feeling in given situations since they're unable to communicate with one another. Kurt's monologue is written as a letter to his wife Katrin and sometimes his daughter, Lucie, while Harry's is as if he's talking to the girl he's smitten with back home.

Most of the game is, yes, very linear, with some simplistic puzzles to complete and items to collect along the way. The items you'll find will give you documents and information about the war, how things were, what equipment was used and more. It's an interesting insight into a time far removed from our own.

The most striking thing about 11-11: Memories Retold though is the art style. Amazing attention to detail has been put into creating a unique filter or shader effect that transforms the 3D world you explore into an oil painting. At first glance it's an impressive effect, with the world rendered in shocking detail. In moments where fires rise up from the ground, or the sun reflects off of surfaces, 11-11 truly looks wonderful, and distinct from other games.

But it's the smaller details that struck me. In order to achieve the oil painting effect, attention has been drawn to the way brushstrokes appear on surfaces. Importantly, the size and direction of brushstrokes differ depending on the width of a surface, the length, and a variety of other factors. It's an effect that's easy to ignore, but if it was done incorrectly it would've been noticeable. Great effort has been put into creating the perfect presentation, and that's why the protagonist Harry has a camera - almost every moment is ripe for a screenshot.

I am incredibly impressed with how much I enjoyed 11-11: Memories Retold. It tells a wonderful story, but it feels a little bottom-heavy. What I mean by that, is that much of what you do for the first two of the game's three parts is incredibly linear. No real decisions are to be made other than some small dialogue choices that don't seem to impact anything. All of the real narrative weight the game carries, and the conflicting decisions the player must make happen at the end. I'm torn on this point. On the one hand, the first two parts of the game and the hours you spend experiencing them are necessary for the finale to carry the weight it does. On the other hand, it almost felt like the game was ending just as it had truly begun.

Despite my minor qualms though, I'm thoroughly impressed with 11-11: Memories Retold. It's the kind of game that isn't trying to replicate games that have come before, it's just telling a unique story about a war that had no glory for anyone at the end. Just lifelong wounds. 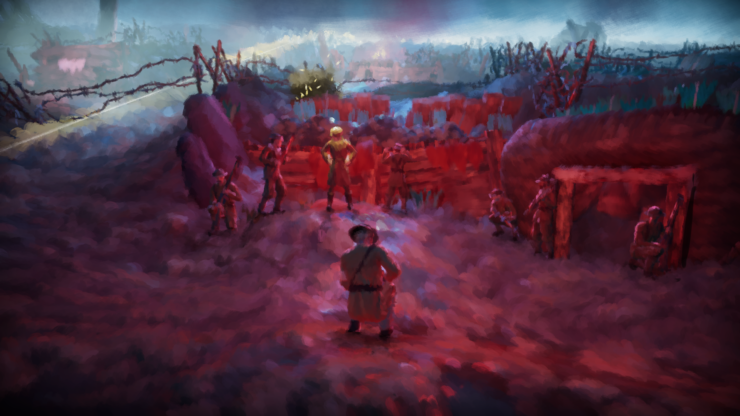 It's not the most engrossing narrative I've ever experienced, but it's certainly incredibly memorable. I enjoyed all of my time with 11-11: Memories Retold and can heartily recommend it to the narrative adventure fans, or anyone who just wants to see a game rendered in an incredibly unique art style. I can't wait to see what kind of game Aardman makes next.