Each month I’d like to explore a game that had an impact on our past, a game that captured our hearts and minds and perhaps burned memories into us. The point is to determine whether or not these amazing video games still have a place in our hearts, and most decidedly if they are still enjoyable so many years later. I’ll choose a game that was released on the month it’ll be written. The game will be random, but I’ll strive to look for something that was either great, or on the edge of greatness. If it was horrible then, it’s likely still horrible now. Whether or not something is suddenly fun isn’t the question I’m trying to answer. 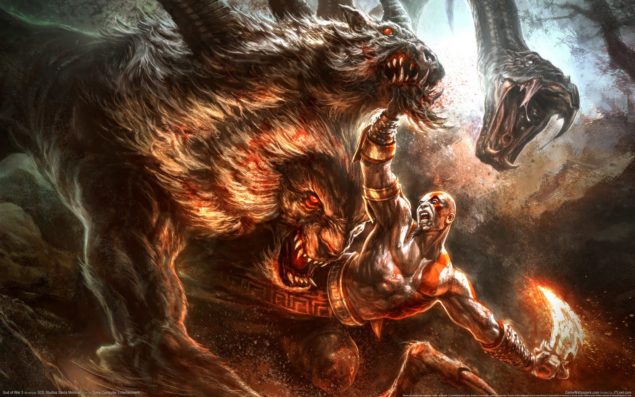 And now, time for something completely different. Let's play some God of War.

God of War took the world by surprise when it was released 10 years ago on March 22nd 2005. It presented a great backstory rife with lore and mythos that was presented in a novel storytelling atmosphere. Also, it was even somewhat loosely based in reality, another plus for those that enjoyed their Greek mythology. It was awesome. Not to mention the graphics at the time of release, now those were some revolutionary pixels and polygons on the screen. Sort of.

You become the deeply furious and resentful Kratos as you storm your way through Greek locales fighting hordes of soldiers, harpies, centaurs, minotaurs, Sirens and even clones of Medusa herself while slashing, crushing and even beheading your vile enemies with your Blades of Chaos. All in the name of Athena, all to find the Pandora's Box so you may destroy the one creature that stands in the way of your own redemption, Ares.

Move through Greece from a third person perspective using some novel platforming skills from time to time to complete some benign as well as some very difficult tasks. A system of attack combos and quick time events can be used to take down your enemies in glorious and savage glee. It’s so gory that it’s almost surreal, and slightly comical at times. I absolutely love the sequences and combos that you can perform and the artistic bloodletting that ensued. It's all quite entertaining to watch, and to perform in game.

Work your way through puzzles that are supposed to challenge you to actually think for a second. For me, at least, I found that some of the puzzles were downright ridiculous and actually annoyingly hard. I became very frustrated at some points, especially in the Rings of Pandora. But overall, they didn't present challenges that were too terribly difficult.

Mowing down wave after wave of enemies was probably the most satisfying part. You don't necessarily have to match each power to a specific level, but being smart about which one you have on tap can help to make it an easier play through. I'll be dammed if I don't enjoy throwing lightening at my enemies, though. That satisfying crackle as you shock your enemies into submission is quite fun.

All of that gory violence wasn't necessarily without its flaws, either. The inclusion of the dreaded quick time event is the most glaring flaw and it certainly doesn't have a very positive history inside the gaming community. It's a downright cop out to adding usable gameplay elements sometimes, and at other times it's just a minor annoyance. In this it was somewhere in-between those two extremes.

While it was largely an optional button press to activate a more grisly death sequence for harder enemies, it was still there. Perhaps it was my frantic and inaccurate button slamming style that detracted from the positive effect of having quick time events. But I still found them far too distracting.

The way the tale is woven throughout the game is incredible. The cut scenes aren't long, and they certainly aren't boring by any means. The narrator, Athena, passionately reveals the origin of the being that we know as Kratos throughout the game in flashback sequences. It has a very distinctive flair to it that, at the time, was very unique. It's a lot of fun navigating a cinematic. It certainly was when it came out, but what about now?

Is this the game you're looking for?

Unless Obi-Wan has used a sleak Jedi mind-trick on you, then absolutely yes. Even today in the non-updated form, it is an absolute delight to play. The graphics may be dated, but the story  and the gameplay most certainly is not.

The best part is that it's available as a remaster on both the PS3 and the PS Vita. And the remaster even makes use of a completely new graphics engine to show off the power of Kratos in 720P glory.

The combination of the Greek oral storytelling tradition combined with the macabre visuals and the great soundtrack make it a very compelling game to try out, even now. The story alone makes it worth a look. The creators have taken great care to intertwine elements of real Greek myth into the story, which make for a great experience

It’s a work of art more than anything, a production that is certainly more than the sum of its parts. You'd be remiss to vault past this gem. Even if you've played it before in the past, it's worth a revisit.