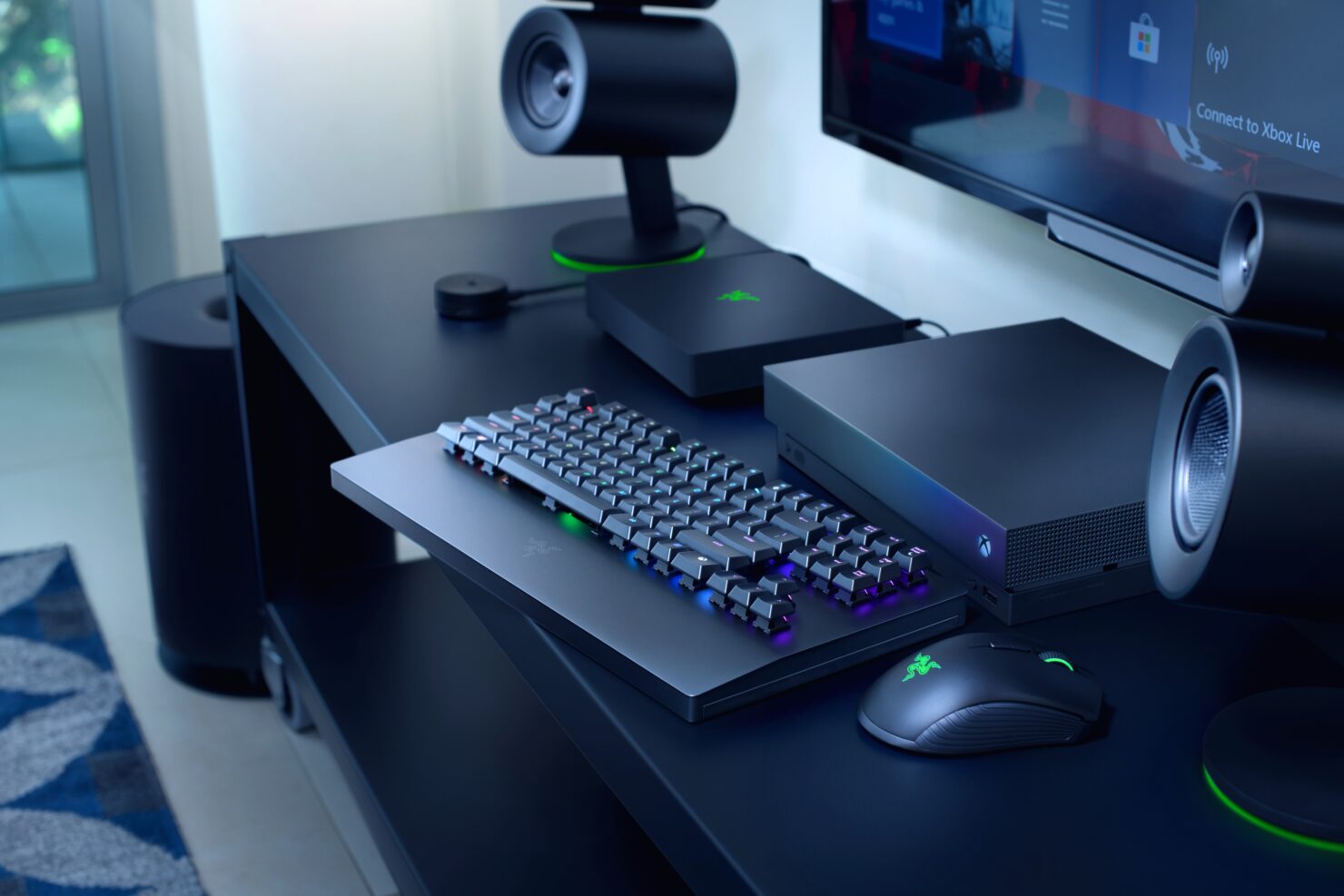 The Xbox One entertainment platform has been trying to expand into more than just a video game console for some time now. However, it wasn't until Microsoft's XO18 conference late last year that details finally came out regarding the use of keyboards and mice on a gaming console that saw very few peripherals that weren't racing wheels, arcade sticks, or wired controllers of various shapes and sizes (yes, even including the infamous Duke controller from the original Xbox, courtesy of Hyperkin). As the first to market for this new support, the upcoming Razer Turret is a very real upgrade to the Xbox One that can give players an unfair advantage and yours truly finally got to get hands-on during a private demonstration with Razer at CES 2019.

Razer's first 104-key solution for the Xbox One shares little similarity to its PC brother of the same name, both called the Razer Turret, although the console variant has the handy tagline 'for Xbox One' appended to the end for ease of searching. The keyboard itself features a full array of Razer Green Switches and Chroma lighting to illuminate your gameplay in a rainbow of color. In lieu of a right control key, an Xbox button was added to get you back to the console menu or reading hate messages after you smoke somebody in Fortnite without having to reach for your regular controller.

Attached to the Razer Turret for Xbox One's keyboard is a mousepad that slides out from the right side and can either be fully extended to a roughly eight-inch mousepad or locked into nearly half that size for a much narrower field of play but still sufficient enough to navigate through inventory menus in-game. Built within the mousepad itself is a series of magnets that help keep the Razer Mamba-esque mouse from sliding off your mousepad and onto the ground. This magnetic underlay didn't feel intrusive at all during normal use and actually helped guide me back into a neutral position in the top right corner between enemy waves in X-Morph: Defense. It's a smart upgrade to keep the mouse from falling off if you decide to break out into a victory dance.

In its native form, the Razer Turret for Xbox One can be run in a fully wireless configuration, leaving only a small wireless dongle to sync up console and keyboard. When it comes time to charge the Razer Turret for Xbox One, the included USB-C cable can charge the keyboard while a much smaller cable included the package runs power from the keyboard into the mouse that's just long enough to use when the mousepad is only partially extended.

When I finally got my hands on the Razer Turret for Xbox One, the build quality immediately felt like I was gaming with something intended to bring the gap between console and PC. The keyboard's tactile response felt no different from the Blackwidow Elite I use as my daily driver at work and the Razer Chroma engine that drives the lighting of every individual key integrated seamlessly with the game I was playing. Important information like base health and readouts were displayed in the RGB lighting across the function keys when I was merely expecting the lighting to be much more ambient and passive.

However, it's the mouse on the Razer Turret that's the star of the show. Every quick swipe or wide scrolling was represented on screen with no latency or glitchiness on the Xbox One. My last experience with trying to integrate keyboard and mouse support on consoles was that of the HORI TAC which took hours of setup per game to get the X- and Y-axis feeling right and tweaking the sensitivity around until it felt right. With the Razer Turret for Xbox One, it was already tuned to the game I wanted to play and the promise of a growing list of supported titles has me interested in getting an unfair advantage online.

Even at first glance, it's clear to see that not only is Razer trying to bridge that link between PC and console control as one of the first to market with a dedicated keyboard and mouse setup for the Xbox One, but they're wanting to do it right. The Razer Turret for Xbox One is available now for pre-order online and through select retailers, priced $249.99.