Razer has showcased the world's first fully modular concept PC which they have codenamed Project Christine at CES 2014. Razer's Project Christine is a truly innovative, futuristic and next generation PC concept design which will deliver more than just ease of use and upgradability to end users. 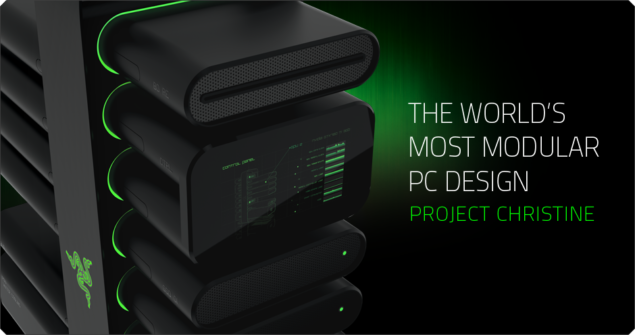 So what is Project Christine? Since the dawn of PC gaming, DIY builders, enthusiasts and modders have been building rigs from the hardware they buy separately. Building custom rigs is a fun job especially when you are building a high-end one but PC gaming has evolved over the years. Many console and casual gamers have been diverting PC gaming due to the open nature of the platform which allows several gaming configuration, mods along with several other reasons.

This new inflow of gamers is great for the PC gaming market but has its own downsides. First up is that the new gamers have trouble building their own PCs hence the have to go for OEM manufactured PCs which to be honest cost more than a DIY build. Second issue faced by the new audience is the ability to optimize their game settings for various hardware configurations which has been solved by new optimization software from NVIDIA (GeForce Experience) and AMD (Gaming Evolved App). This leaves only the first problem to remain unsolved but Razer's new concept is a glimpse of the future and how to make PC gaming more accessible with the hassle of upgrading and reassembling hardware.

The Razer Project Christine is a fully modular PC which means its fitted with several modules housing hardware components such as processors, graphics cards, memory, storage, etc. What about the motherboard? Like i said, the PC is fully modular and the motherboard components are fitted inside a large spine that runs in the center of the modules and the entire PC is ran off the PCI-Express architecture which in simple terms allow a Plug and Play functionality. 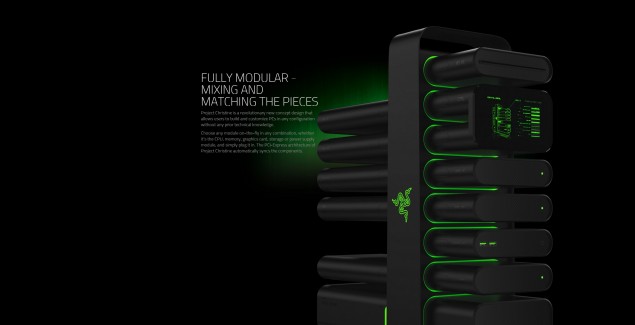 "Project Christine is a new concept design that will revolutionize the way users view the traditional PC. This is the first gaming system that is able to keep pace with technology and could allow consumers to never buy another PC, or gaming system, again," says Min-Liang Tan, Razer co-founder, CEO and creative director. "We have a history of bringing incredibly innovative concept systems to market and it's fair to say that Project Christine is a very exciting new prospect for future development.

The modular units which contain the hardware components can easily be attached to the PCI-Express connector hubs which are interconnected with the highly sophisticated motherboard that runs in the enclosure's spine. The concept design shown by Razer at the CES 2014 booth featured Tri-SLI NVIDIA GeForce GTX GPUs and several Intel 4th Generation core processors. The motherboard supports all the way upto  quad-SLI graphics, multiple SSD and RAID storage components, I/O and even power supplies, ensuring maximum flexibility. You can equip upto four processors to the PCI-Express interface offering extremely high-end hardware flexibility.

Project Christine is a revolutionary new concept design that will change the way users view PCs. It will allow any user to build and customize his or her PC in any configuration without any prior technical knowledge. Further, as new upgrades come to the market, the same PC can be easily and quickly upgraded without additional technical assistance and without the fear of incompatibility or obsolescence.

But this doesn't end here, suppose a new hardware gets launched, what should users do then? Razer has told that the Project Christine is fully upgradable hence when a new CPU, GPU, HDD is launched you can easily swap out the older GPU and plug in the new one without worrying about incompatibility. This just feels like a dream come true for PC Gamers. Razer has also mentioned that the modules for new and existing hardware will be custom built and shipped directly by Razer which includes CPUs (Intel), GPUs (NVIDIA), HDDs, Power Supply, Memory, etc. 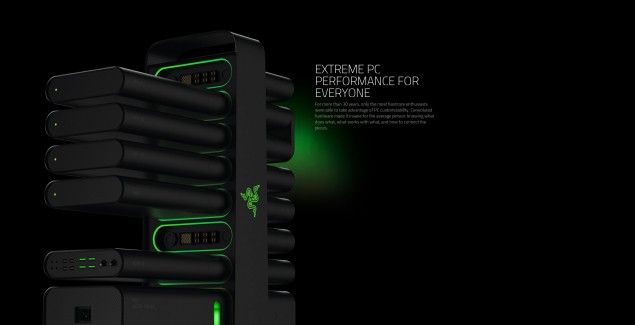 To cool the hardware, the Project Christine features an active liquid cooling system which uses mineral oil and noise cancellation technology so you should not worry about thermal operation and acoustics of this machine since it is going to be super silent and extremely cool under full load. This allows Razer to factory overclock the modular components offering extra performance with the addition of an LED display which features several maintenance options to users.

For software, Project Christine would feature multiple OS support at once may it be Windows, Linux or SteamOS. They will all be available to you with full functionality.

You can visit the official page of Razer's Project Christine at - http://www.razerzone.com/christine

Virtual Reality is the main highlight of this year's CES but Razer has also showcased a true innovation in the PC industry. The Project Christine is still a concept at the moment and Razer wants feedback on the design and functionality of their new product. We know that if the Project Christine ever becomes a reality, it will launch with a huge price tag given Razer's history with pricing especially when you are talking about Mineral Oil for active cooling plus the prices of the modular units would be a premium over the original prices of the shipped hardware. The concept is futuristic and cool and it would be interesting if Razer manages to launch this a few years from now at a price range around $1500-$2000 US which seems unlikely. What do you think about the Razer Project Christine? Let us know in the comment panel below: