Just when we thought Razer couldn't come with something radically new, it just did! Introducting the world’s first discrete 7.1 surround sound and 2.2 stereo gaming headsets known as the Razer Tiamat.

The Razer Tiamat 7.1 headset consists of 10 drivers in the headset; 5 in each to produce true 7.1 Surround Sound that is claimed by Razer's own RazerGuy, "built to deliver the most powerful, clear and accurately produced positional audio gamers will ever need for the competitive edge". 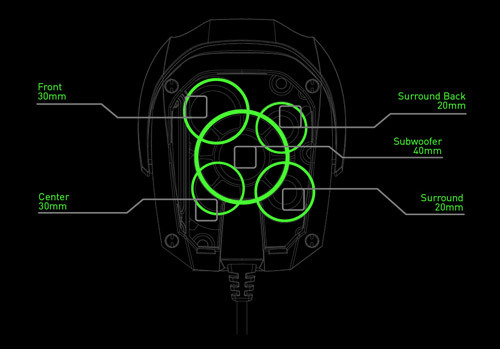 Both variants of the Razer Tiamat come with leatherette ear cushions will come as standard so the user will stay comfortable in extended gaming sessions.

Scroll down for the press release.

Gamescom, Cologne – August 17th, 2011 –Razer, the world’s leading high-end precision gaming brand, brings true pinpoint positional audio to hardcore gamers everywhere with the Razer Tiamat headset range – the world’s first discrete 7.1 surround sound and 2.2 stereo gaming headsets.  Get the tactical advantage in combat when you can hear and react to every gunfire, explosion and voice realistically all around you.  And with bass so powerful, the Razer Tiamat will blow you away.

“The Razer Tiamat headset range is the pride of our audio engineering, the world’s first 10 driver headset, built to deliver the most powerful, clear and accurately produced positional audio gamers will ever need for the competitive edge,” said Robert “RazerGuy” Krakoff, President, Razer USA.  “Surprise the enemy trying to creep up for a stealth kill, when you can hear their footsteps loud and clear behind you.”

The Razer Tiamat 7.1 also gives gamers maximum customizability of their audio experience adjustable on a sleek control unit.  You can precisely fine-tune the volume of every audio channel, position, and bass depth, as well as conveniently toggle between the headset’s 7.1 surround sound mode, 2.0 stereo mode or external speakers as long as they are also hooked up to the unit, so you’ll have the right setup for your entertainment at all times.

The Razer Tiamat 2.2 is outfitted with a total of 4 discrete drivers, 2 dedicated especially to bass to give your head that rumbling sensation every time you calmly walk away from an in-game explosion.

Both versions of the Razer Tiamat come with leatherette ear cushions to keep you comfortable during long-haul gaming marathons, and a precise, unidirectional noise-cancelling microphone so your battle chatter stays as sharp as your audio.