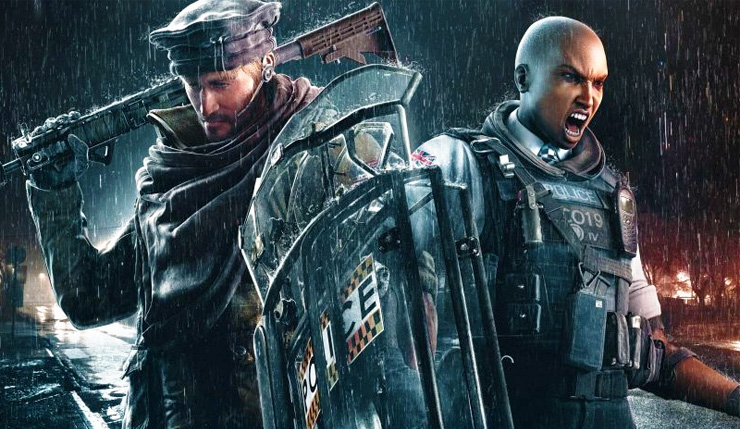 Rainbow Six Siege’s third “season” of Year 3, Operation Grim Sky, is officially here! This latest update adds two Operators, Maverick and Clash, reworks for the Hereford Base and Consulate maps, a new Elite Set, weapon skins, and more. Ubisoft has been gradually rolling out the update this morning, but it should be available on all platforms as of now.

You can get more details on everything included in Operation Grim Sky, right here, but here’s a quick rundown of the biggest additions:

Clash is the first defender with a shield. The CCE Shield is her primary weapon; she can swap to her secondary at any time, but to do so, she needs to put her shield away first. Her bulletproof extendable shield has the ability to slow down opponents by using a high voltage Charged Field Generator (CFG) that emanates directly in front of the shield in a cylindrical shape. Opponents caught in the CFG also sustain low damage over time. Effective use of the shield allows Clash to block entry points, and to prevent or delay a push by the Attackers.

The aim of this Hereford Base Map Rework is to address issues pertaining to the map’s flow, balancing, and visual thematic to make the new Hereford Base viable for competitive play. Each floor of the new Hereford Base will have a larger surface area, which also means more destructible floors and walls. New stairs and hatches will be available, allowing for more movement between each floor and increasing the viability of rotations.

The map’s visual identity and color palette are also getting an update, giving each floor more personality. Players will find a mix of old-school and modern influences, and thematically distinct rooms. However, the map will still retain its “soul,” making multiple nods to the old Hereford Base.

The sky may look grim but things are looking up on Consulate. The Development Team dusted off some old blueprints and sought ways to improve this Rainbow Six Siege map, taking into account both the Attackers’ and Defenders’ perspectives. The Police Line spawn point will be extended, offering a safer path to the fortified building. As for the Gas Station spawn point, a wall will be moved to prevent spawn peeking and early kills. We’ve also added a fourth bomb site in Tellers and Archives. Time to revise those strats.

Ubisoft is also making some additional Operator changes based on test server feedback.

Finally, we shouldn’t overlook the fact that the Grim Sky update also introduces dynamic resolution on consoles, which will result in more consistent performance. Here’s how the various platforms line up: