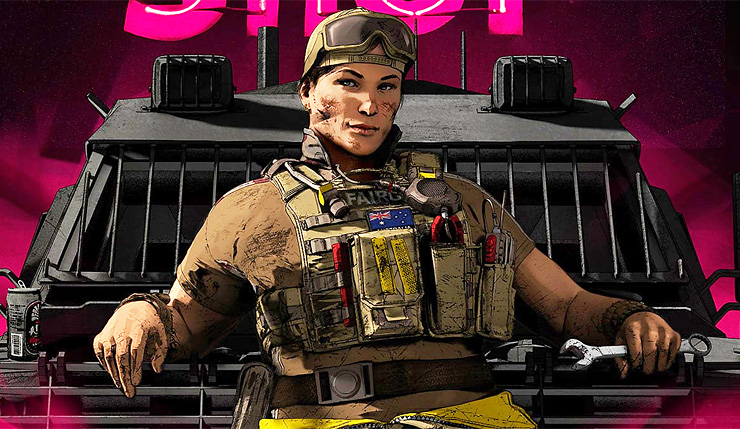 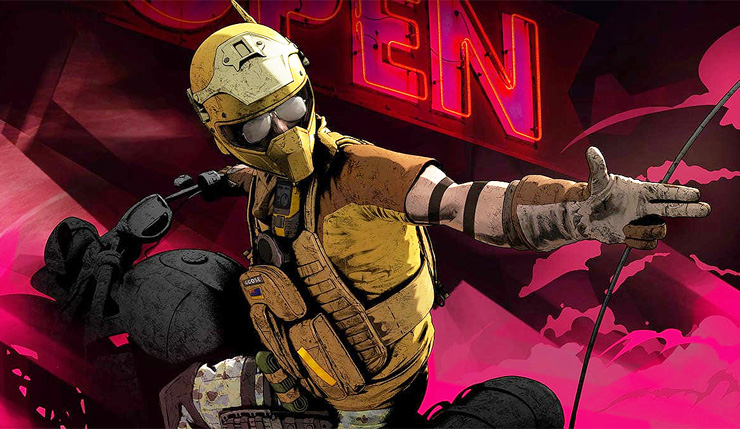 Working in the SASR’s Mobility Troop Gridlock devised the Trax Stingers. A variation of road spikes, they aren’t just about stopping vehicles. Trax's design is a portable version that when activated, deploys a hexagonal cluster of spikes. These Trax Stingers cover uneven ground better than a straight mat. Once deployed they can replicate and spread out over a large area. This feature, unique for an Attacker, enables them to use the Trax as an obstacle to reshape the map and control an area. Effects on the enemy include slowing them down and causing damage when stepped on. Trax Stingers will be destroyed when shot or dealt impact or thermal damage.

Mozzie’s Launcher is like no other. Pests are tiny 4-legged bots that can be used to target a single drone, or deployed into an area to prevent access by a drone. When launched, the Pest latches onto the nearest enemy drone and obscures its camera. It then initiates an override sequence to hack the drone and give control to Mozzie. Counter-intelligence is enabled with no risk of a counter hack. Single-use only, Pests self-destruct by dissolving into thin air once their target is in Mozzie’s control. Attackers are notified when their drones are nearing a deployed Pest. Once aware of the Pest, Attackers need to think carefully: should they risk giving their drone to Defenders, or retreat and lose potential intel?

Welcome to the Outback! This map kicks dust in your eyes in its homage to all the lonely service stations and motels along the forgotten highways that cross Australia’s desert. Fan favorites Oregon and Clubhouse were the inspiration when designing the 21st map of the game. The map is divided into three distinct sections – the Garage, the Motel, and the Restaurant – with much effort put into ensuring each section is recognizable, even from a distance.

The focus returns to a style of gameplay that players have enjoyed in the past. There’s only one door between each of the sections but roamers can create new paths by destroying walls, and there’s always the option of changing floors as a flanking strategy. It’s a medium-sized map, so players won’t need to go far to find alternative routes. Packed with twists, turns, and Australiana, Outback is filled with unexpected corners and souvenirs from the Great Southern Land.

The Rainbow Six Siege team is releasing a new Newcomer playlist and offering updates to the Casual playlist. First off, we are releasing a new multiplayer playlist for players under level 50, called the Newcomer playlist, to help them learn the basics of Rainbow Six Siege. They will play the Bomb mode of classic maps most representative of the game’s core gameplay, namely Chalet, Bank, and Consulate. Attackers will vote for a team spawn point while on the Defenders' side, the bomb sites will be automatically pre-selected by the game.

The Casual playlist will now improve the flow between the Newcomer and Ranked playlists. There are three key updates. First, the Defenders will know which bomb sites are selected before choosing their Operator. Second, the Attackers will now choose their individual spawn points. Third, the Action phase now lasts 3:30, allowing for an intermediary step between Newcomer and Ranked. Finally, in order to stabilize the Ranked gameplay experience, the required minimum level has been raised to 30. This is meant to encourage beginners to take their time and learn the game before engaging in Ranked play. 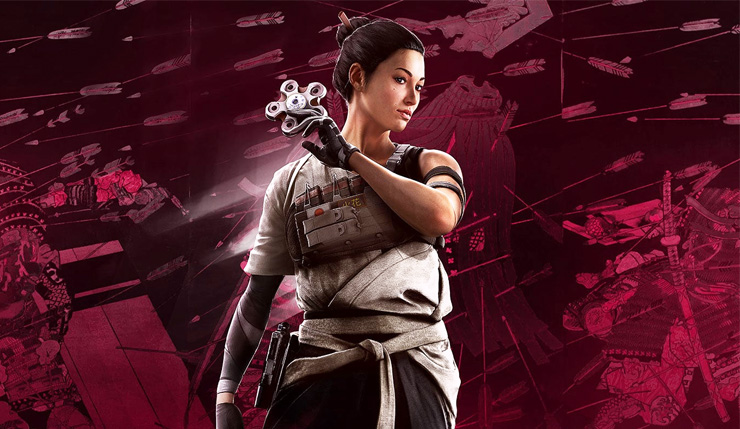 We are sharing the teachings of the Japanese martial art Kyudo with this elite set. Operator Hibana knows better than most that learning a martial art takes a lifetime to master. Embodying precision and beauty, Elite Hibana proudly wears the Onkochishin uniform, along with the following: Victory animation, operator card, gadget skin for X-Kairos, and weapon skin for the Type-89, SUPERNOVA, P229 and BEARING-9. She’ll also have the Elite Hibana Chibi charm.

Operation Burnt Horizon features a series of iconic themes of the land Down Under. From traditional aesthetics to sand, sea and surf, these skins evoke the fun and wild atmosphere of Australia. This seasons weapon skins include the scaly freshwater Crocodylus, dangerous Ocean’s Teeth and finally hit the surf with Board Cove. Seasonal weapon skins are released upon season launch and can purchased during that season. Once unlocked, the seasonal weapon skins can be applied to all available weapons and will remain in the player’s inventory.

Previous camera placement at a full lean allowed players to fire without being completely exposed. As part of our fix to counteract lean spamming, we are shifting the camera to the center of the head instead of the far side of the head, even when at a “full lean”.

With Y4S1, we have cleaned up the animations in the back end, and streamlined them. This will allow us more freedom to implement new features and unique aspects of the game in the future, as the overall animation development pipeline has been streamlined. We have also updated the new running animations based on the player feedback we received so that the head lean is less aggressive to make the sprint animation look more natural.

We will be testing a switch to Advanced Gadget Deployment for all players. We feel very strongly that Advanced Gadget Deployment is the proper way to play Rainbow Six Siege, as it allows for more control over your Operator, as well as increased fluidity. As always, we will be monitoring feedback on the Test Server, so please let us know what you think about this feature!

With the launch of Y4S1, we will be activating the Match Making and Rating (MMR) Roll Back feature. When a cheater is banned, this feature will roll back MMR gains and losses for all players from matches that the banned cheater participated in for that Season. The system will not grant you MMR beyond your max MMR for the current Season.

Phew, that’s a lot of changes! If you need to know about every minor tweak and bug fix, you can check out the full, unabridged patch notes here and here.