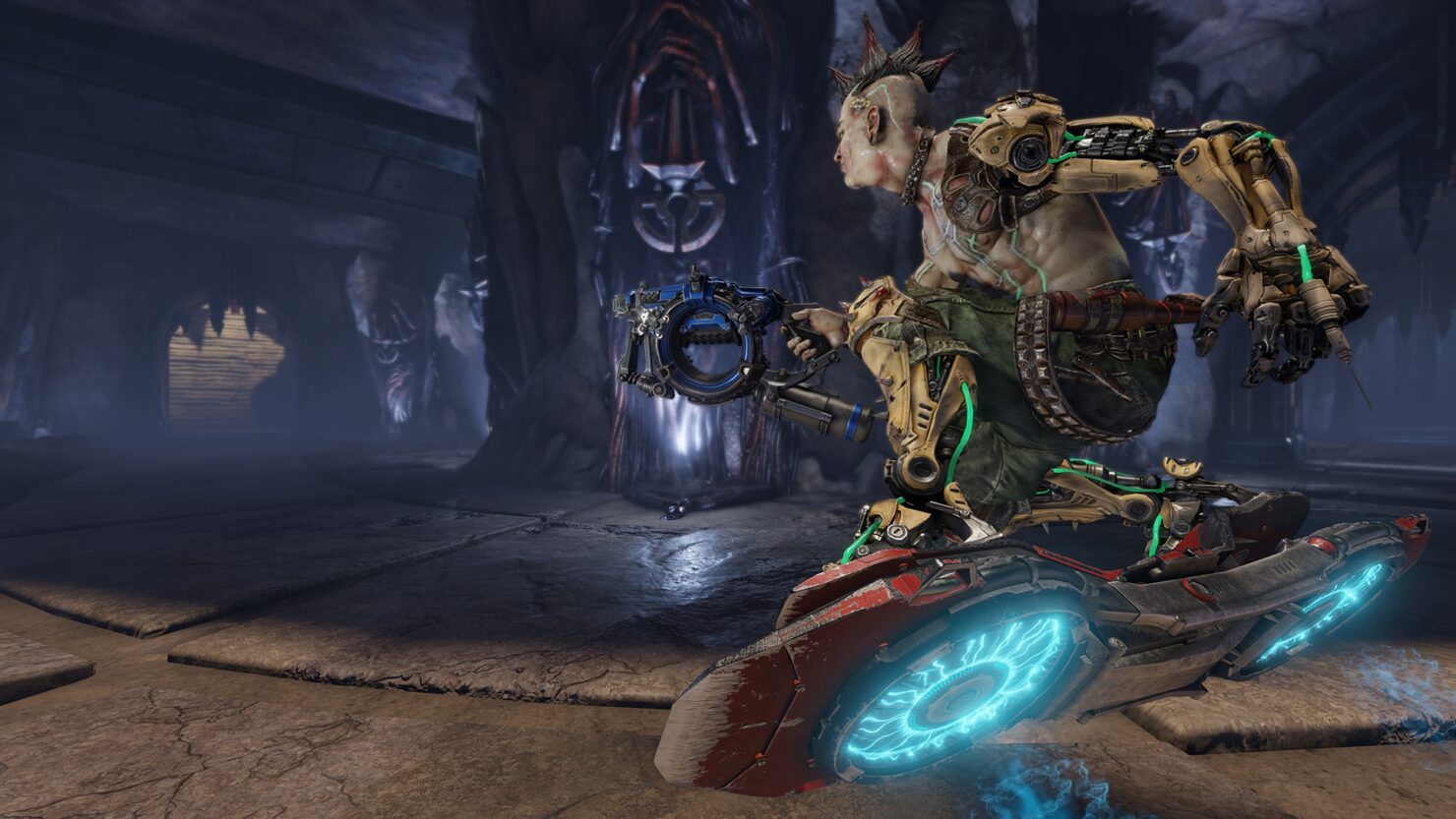 Some of my earliest memories playing computer games come from the Quake series. When Quake III Arena launched, I was lucky enough to be able to play it on my older brother’s computer. There’s no doubt I was too young to be playing a game like that (I was roughly seven years old at the time), but even my younger self knew how good Quake III was. The blistering pace of Quake III alongside an arsenal of iconic weapons put id Software’s first-person shooter into a league of its own. It’s a shame to see what has become of the series now; from one of the most popular games on the GameSpy browser to a name new gamers barely even recognize.

Unveiled at E3 2016 during Bethesda’s conference, Quake Champions is the latest installment in the Quake series. After twelve long years, Quake is finally returning to PCs. I imagine some hardcore fans may be concerned at the prospect of a new Quake game, perhaps fearing the newest entry may be simplified for a console audience. The developers have confirmed that Quake Champions is a PC exclusive game, so you can rest easy knowing this is a true sequel to the once legendary series. There is one big change in this installment compared to the other titles: Quake Champions is free-to-play. I was given access to the Closed Beta across the last two weekends to see how the game is doing so far.

Anyone that has ever tried the classic Quake games before knows exactly how brutal it can be when you first start out. You know what I’m talking about, every player on the server bunny-hopping around the map while you struggle to move for ten seconds without getting instagibbed. Don’t worry, we’ve all been there. Modern games try not to throw players into the deep end anymore, but I guess Quake Champions hasn’t received that memo… Love it or hate it, this is the same Quake experience players had back in 1996 with Quake 1, 1997 with Quake 2 and 1999 with Quake 3 (we don’t talk about Quake 4). The skill ceiling has always been very high with this series, and that certainly hasn’t changed with this entry. 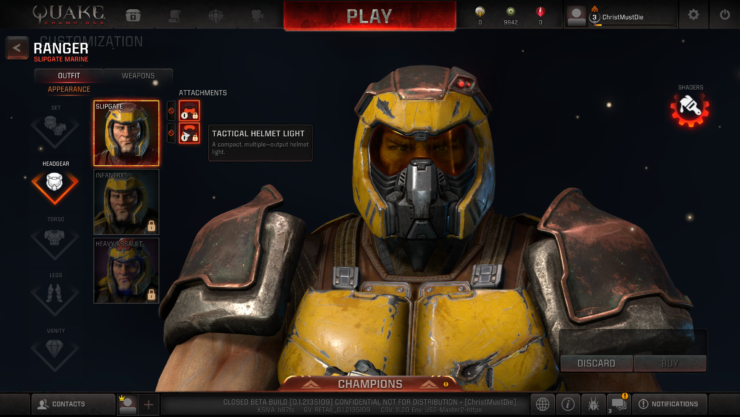 Going back to modern gaming, if there’s one thing players cannot avoid these days it is cosmetic items. Loot boxes, crates, supply drops… call them whatever you like, these containers of junk are here to stay. I found it so strange to see all the cosmetic items available in a Quake game, it just seemed so alien to me. Purchasing or unlocking through the leveling system loot boxes allows players to alter their Champion’s appearance with a variety of items. The amount of detail in each item goes a bit too far for my liking, though it isn’t a problem as you aren’t forced to buy these loot boxes. An example of this is the Ranger’s appearance. You can customize his headgear in three minor ways (using loot box items), and you can go one step further by adding attachments like a Tactical Visor or even a Tactical Helmet Light. I mean, if this isn’t too far then I seriously don’t know what is. This is a far cry from the mod support back in Quake III where you would see players running around as Homer Simpson in servers.

Unlike every other version of Quake so far, id Software’s newest game drastically changes the original formula by creating unique characters as opposed to each character being exactly the same. The developers have even brought back some classic Quake III Arena characters, including Anarki (a cyberpunk man on a hoverboard), Slash (a woman wearing glowing ice skates) and Visor (a dude wearing a visor). These old character models have been transformed into Champions, sporting their own abilities that differentiate them from the rest of the cast. Slash’s glowing ice skates now have the power to create a trail of plasma that damages enemies who make contact with it, whereas Visor has the ability to see through walls temporarily. Each Champion is equipped with both Active abilities (like the ones just mentioned) and Passive abilities. I didn’t notice any balancing issues with my time with the game, though this may have been because most of the people I played against stuck with Ranger as their chosen Champion.

The free-to-play element of Quake Champions is most apparent when selecting a Champion. By the time the game launches id Software are hoping to have twelve Champions to choose from, that is if you pay for the game. Free-to-play users are stuck with Ranger as their only Champion unless they use the in-game currency to rent heroes for a cool twenty-four hours. At first, I wasn’t pleased with this system as it restricts you from seeing all the game has to offer, however, this restriction is only in place for those who have not purchased the game. Looking at it from this perspective, I found myself appreciating this approach as it gives potential buyers a great look at what the game has to offer without investing any money whatsoever. If you play Quake Champions for long enough you’ll soon be able to try each Champion without spending a penny. 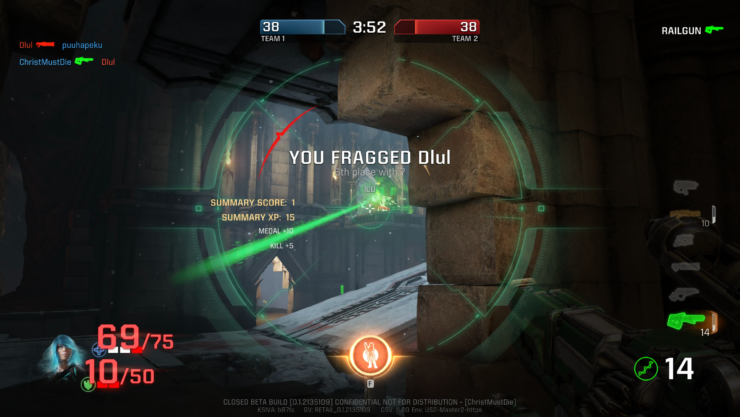 The beta featured three modes that will no doubt be familiar to most first person shooter fans: Deathmatch, Team Deathmatch and Duel. Everyone knows what to expect from the Deathmatch modes so I’ll focus on Duel. Duel is essentially a pay-to-play mode, and by that I mean you’ll want to have every Champion unlocked if you intend on playing this mode seriously. In order to play this mode, users must have at least three Champions unlocked. Players select their three Champions as they fight 1v1 on a map.

Right now Duel uses full-size maps instead of smaller maps designed specifically for this mode. These larger maps create a problem as this mode is based on a five-minute timer. Players can run away after scoring the first kill, leading to very boring games. That’s not to say this happens all the time, but I can foresee this becoming a problem once players become good with the high mobility characters.

With this latest title, I can safely say Quake has finally returned. Quake Champions is shaping up to be a very different experience than what younger gamers are used to. The fast pace of this game is something that a lot of players will need to adjust to, but it's so much fun that you won’t mind dying constantly in order to learn the mechanics. Whether you are a returning Quake veteran or a total newcomer to the series, there’s no reason not to give Quake Champions a try when it launches later this year.