Someone managed to cram four, yes four, AMD Radeon R9 Fury X liquid cooled cards into a machine and benchmark them. As reported by LegitReviews that someone happens to be Matt Buck an AMD technical support engineer from the UK. 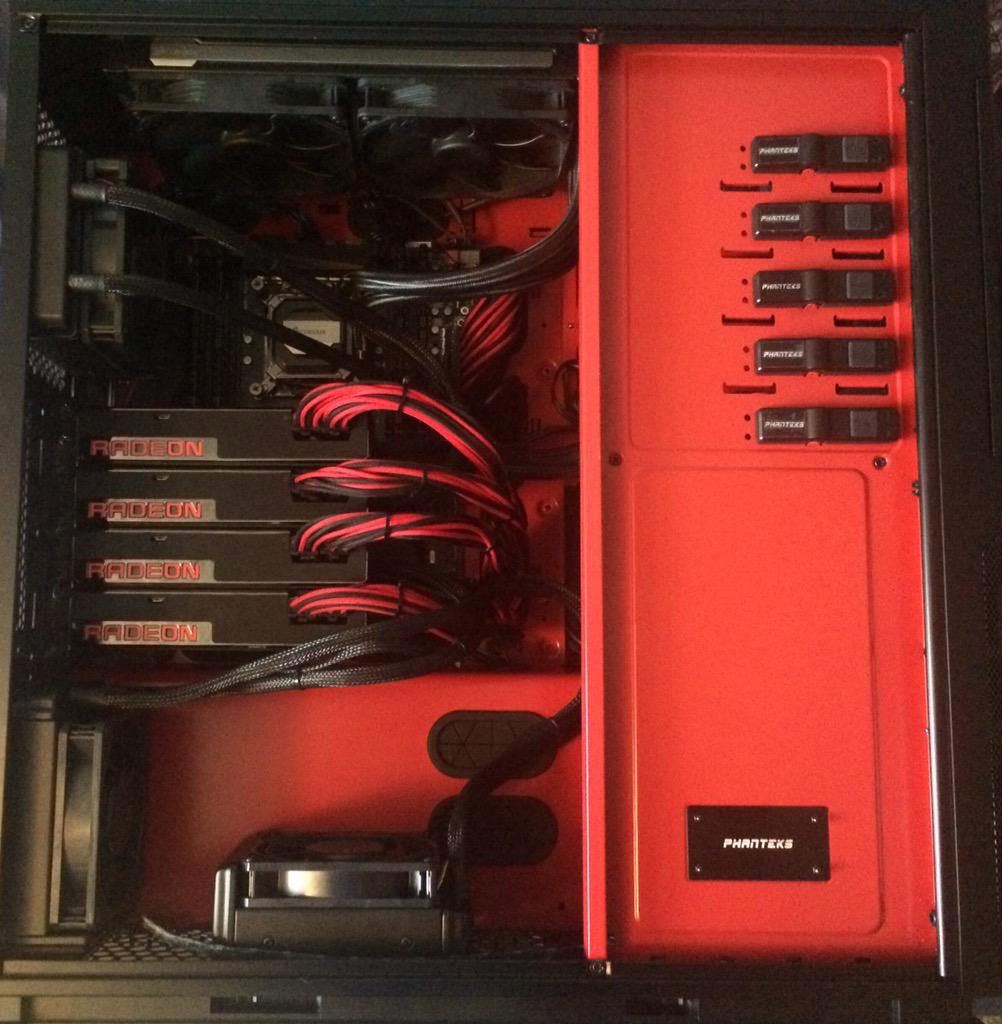 The machine is Intel based, which is slightly ironic considering the company Matt's working for is the arch-rival of Intel. But in his defense an overclocked i7 5960X is really a necessity for any sort of attempt at breaking records, which apparently this is. 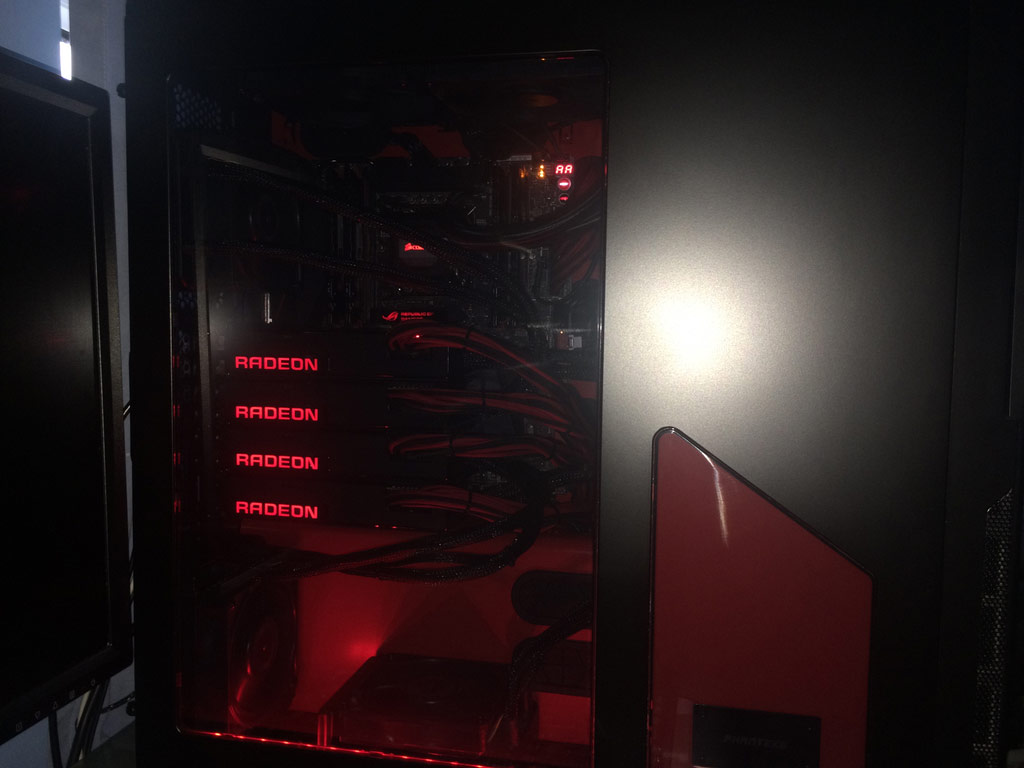 With the CPU overclocked to 4,898Mhz and the four FUry X cards running at stock clocks the system scores 13,605 points under 3DMark's FireStrike Ultra v1.1 (3840x2160) test overall and achieve a graphics score of 15,307. With the CPU overclocked to a more reasonable 4.5Ghz clock speed the system achieves an overall score of 13,286 points.
These results were obtained with the AMD Catalyst 15.15 Beta drivers 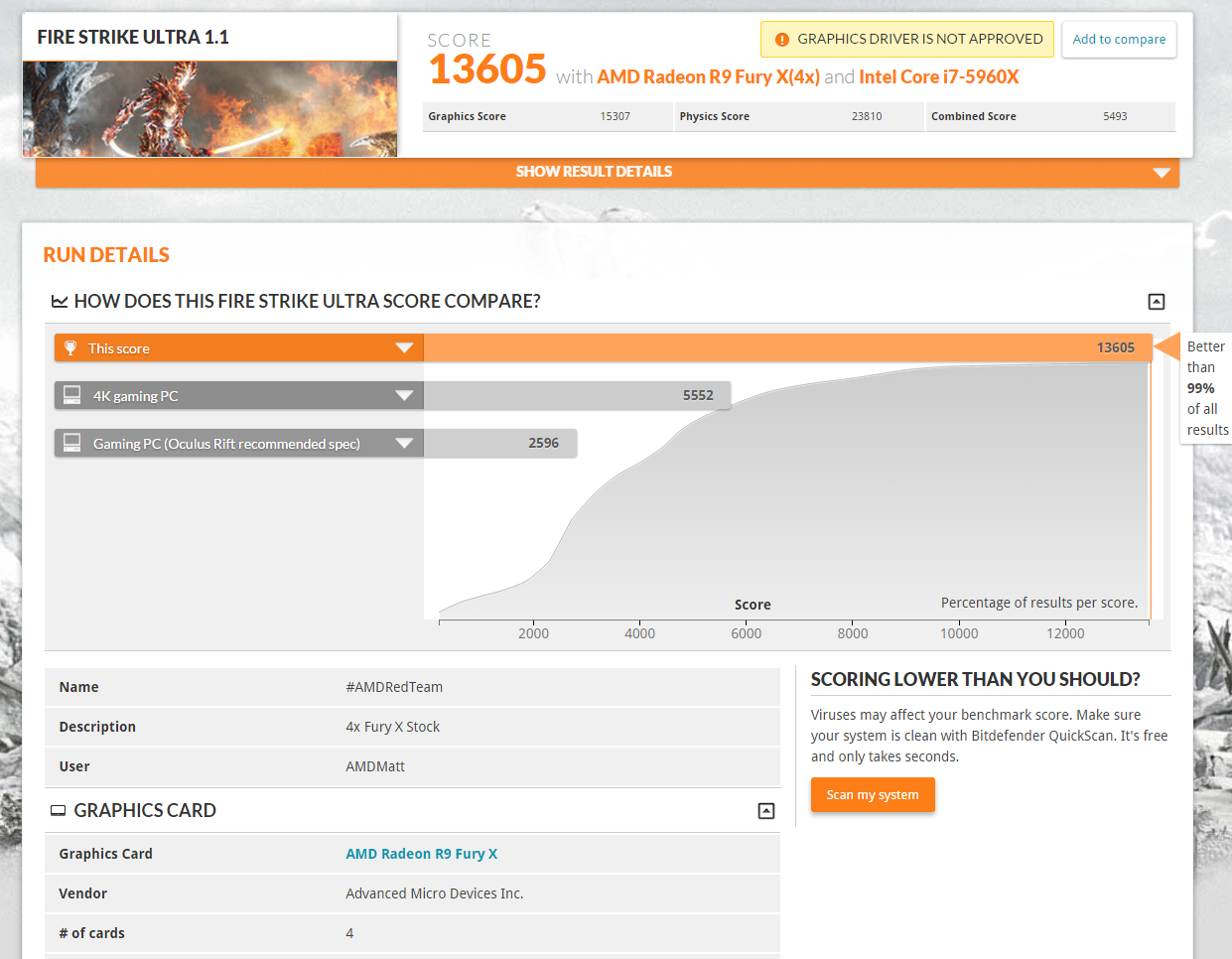 This result would be ranked 35th overall in the 3DMark FireStrike Ultra hall of fame ladder had the drivers been recognized by 3DMark. A 13,605 score is notably ahead of multiple overclocked 4-Way SLI TItan X + 5960X setups as well.

Temperatures for the cards ranged from 48c to 56c using the default fan curve. With the fan spinning at a higher RPM the temperatures are brought down to the 35c-52c range. Matt also posted scores for a single card as well as dual and triple-fire.

Naturally a system like this is just for bragging rights as the scaling with multi-GPU setups hits diminishing returns really hard after the second graphics card. And despite the Fury X's and Maxwell's power efficiency,  put four high-end GPUs in a case and you'll quickly realize how hot your room can get. Plus the power supply requirements will be well over 1000W especially if you want to overclock the system and try to achieve any kind of record.

Perhaps a more appealing solution for those extreme enthusiasts would be to use two dual-GPU graphics cards like AMD's upcoming dual-fiji board. However for the grand majority of gamers a single Fury X at $650 would be more than capable of delivering a great gaming experience.