If you're one of the lucky people that played Halo: The Master Chief Collection between November 11th 2014 through December 19th 2014, then you should be receiving a code to be redeemed in the Xbox Live Store very soon for Halo 3: ODST. 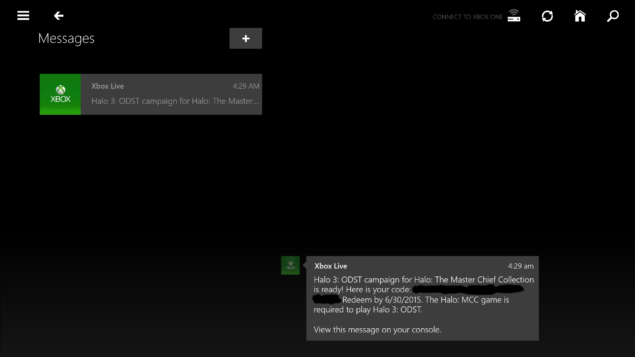 PSA: your free Halo 3: ODST code should be waiting for you in your Xbox Live messages now. Redeem before June 30th.

If you didn't open or play Halo: MCC during those dates, then don't worry, it's also available as a $4.99 add-on if you so choose to pay for it (it's worth it).

So check those messages and get to downloading! The inclusion of Halo 3: ODST for free might not be considered enough of a compensation for the issues that plagued the initial released for some, though it's still a fantastic effort on the part of 343 Industries to try to alleviate any angst over the unfortunate buggy release. It's a very nice gesture and something that I'm not sure many developers would do. It's above and beyond expectations., really

Halo 3: ODST is completely remastered with some quite nice visuals and a good dose of fancy particle effects too. So far the campaign is exactly as I remember it, just that much more beautiful to look at. Hopefully the matchmaking issues will continue to be few and far between and more players will migrate back to wanting to play competitively online. I do miss having some good matches.