The good folks at Eurogamer have provided a Gameplay Stress Test between the PS4 and Xbox One versions of Project CARS. The video can be viewed below:

Project Cars has a PC style graphics settings menu that allows you to turn on/off individual effects. So how much of a frame-rate boost do you get by turning everything off, compared to leaving everything on? Spoilers: you're probably best off leaving all of the effects on.

"Project Cars' range of lighting effects is impressive. Both consoles boast an extensive visual effects menu to tweak each aspect, and though not as full-bodied as the PC's full graphics menu, we do get a level of flexibility rarely seen on console."

Project CARS final console builds hits 60fps in its career mode races, although the consistency falls severely on its weather settings. Heavy rain is still the cause of most sizable drops to 50fps and sometimes even lower. The Xbox One struggles to match the PS4's performance, especially during races with many cars on screen, where the PS4 clearly takes a lead. 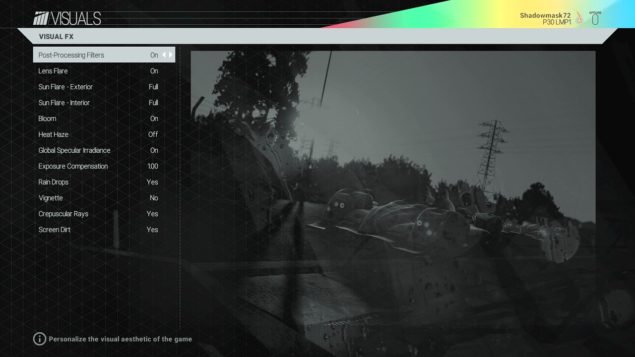 In quite an unusual fashion for a console game, Slightly Mad Studios provides players with a large set of options to use in Project CARS.

Project CARS is set for a May 8 2015 release for the PlayStation 4, Xbox One and PC. We will bring any new information on the game as soon as it  becomes available. Be sure to check out our previous coverage for more on the game.