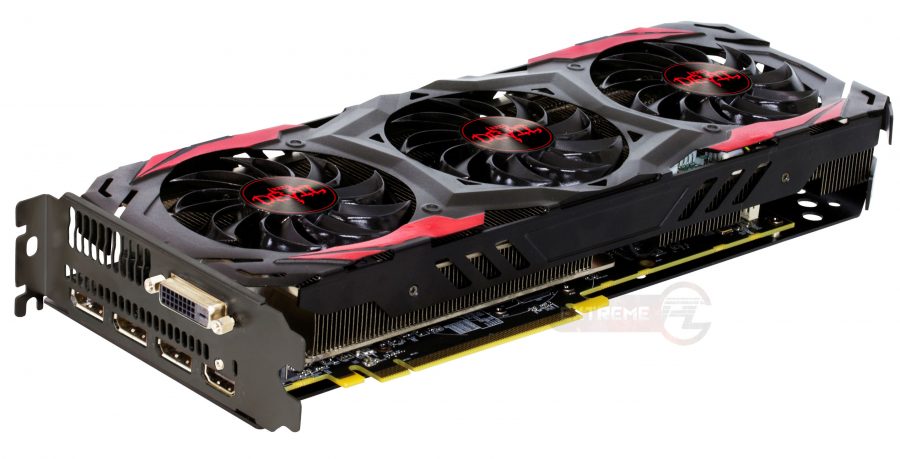 With manufacturers already starting to roll out their custom GTX 1060 variants, here we get to see a PowerColor RX 480 Red Devil in all of its glory, and that massive cooler isn’t just present for an aesthetic upgrade.

Despite the fact that the specifications have not been confirmed, VideoCardz reports that the ‘out of the box’ clock speed of the PowerColor RX 480 Red Devil is said to be 1350MHz, suggesting that the graphics will easily be able to surpass the 1400MHz mark on the massive air cooler alone, assuming the clock speed happens to be right on the money. Since, this is a non-reference design, the custom board comes with an 8-pin power connector and the triple-fan cooler itself seems to be little longer than the board itself, but this should deliver much better cooling to all sections of the GPU.

Another thing that you may not have noticed is because of the non-reference design, you get another display connector on the I/O panel, and that happens to be a DVI port. RX 480 Red Devil features a full Polaris 10 GPU with 2304 Stream Processors, 8GB GDDR5 memory and 256-bit interface. There is even a specifications image given below (courtesy of Extreme PC).

AMD Radeon RX 480 is based on the latest GCN 4.0 architecture which makes use of the FinFET architecture to deliver low power consumption, lesser voltage leak and better performance. AMD deploys a completely new architecture for Polaris chips with enhanced features listed below:

The 8GB frame buffer will allow great gaming experience on the 1440p resolution, and the memory clock of the GPU is running at 8GHz, which brings us to a grand total of 256 GB/s memory bandwidth. Could be PowerColor variant provide consumers with the much needed enticement to purchase this over a non-reference custom GTX 1060? Tell us right away.