PlayStation 4 Specifications Analysis – Are They Actually Better than a Similar Cost PC?

Sony has unveiled the specifications of their upcoming PlayStation 4 with which would start a new generation of console gaming. The specifications sheet shown by Sony reveals some rather interesting specs but how do they compare against a similar cost PC, let's perform an analysis.

AMD's Jaguar (x64/x86) core is an upcoming 28nm architecture that arrives on the PC platforms in Q2 2013. The Jaguar core itself is a low power APU aimed for notebooks and tablets. If you aren't aware of an APU, than know that its the combination of CPU/GPU and most of the port controllers on the same die.

The PlayStation 4 comes with a custom built chip with eight Jaguar cores. Hence the PS4 features an 8-Core AMD Jaguar APU which compared to an older generation Bobcat architecture offers 15% IPC improvement. The AMD chip allocated to PlayStation 4 runs at 1.8 GHz with 2 MB of L2 cache shared across each core and includes new instruction sets such as SSE 4.1/4.2, AES, CLMUL, MOVB, AVE6, F16C and BMI1.

The downside of these low-power APUs is that they don't compare to AMD's desktop APU lineup which currently includes the Piledriver based Trinity chips. Hence even with eight cores, the CPU performance of the PlayStation 4 would remain medicore at best since its based on a chip that is suited for netbook and tablet use, not the actual desktop computing or gaming.

One of the confusion that's build up around the PlayStation 4 is of its 8 GB GDDR5 memory. Many have said that its the system memory rather video memory but do take a note at what GDDR stands for - Graphics Dual Data Rate. The answer to these is Unified memory with which the graphics memory could be shared by the system hence PlayStation 4 would be looking at around 7.25 GB in total free memory to run background processes.

Also the point of the higher memory could be to play or use the PlayStation 4 if not for gaming than a personal 4K setup box for which it would suit ideal. Ofcourse in gaming, 8 GB of GDDR5 memory would prove a massive benefit but the GPU itself has to be powerful enough to support such a large Vram buffer otherwise it would become a bottleneck for the whole system. On PC, memory prices have substantially decreased over the past few years with 8 GB and 16 GB modules costing $30 - $70 based on their frequencies.

So our next topic is about the GPU itself.

It has been revealed in the specification sheet that PlayStation 4 is equipped with an AMD GPU based on the Graphics Core Next 2.0 architecture which is also AMD's upcoming Next-Generation architecture.

As the sheet reveals, AMD's GPU inside the PlayStation 4 has 18 CUs (Compute Units), 1.84 TFlops of single precision performance and a memory core clock of 5.5 GHz effective with which it churns out a bandwidth of 176 GB/s. To console gamers, this may sound impressive at first but they actually aren't. In PC scape, a similarly configured GPU falls in the mainstream performance.

This goes off to show that GPU side of the PlayStation 4 would be able to run a few gaming titles, mostly exclusives on 1080P but don't expect 60 FPS.The AMD GCN chip however would provide PlayStation 4 DirectX 11.1 compatibility which would in return allow rendering of High-Resolution textures, Tessellation, DOF and other graphically intensive lightning schemes. Following is the kind of performance to expect from the GCN based PS4 GPU:

PCGamer themselves have done a comparison of PS4 specs with current generation PC Hardware and based on the prices built a similar cost PC that would definitely be able to outperform the PlayStation 4 at launch however we still don't have any specifics on PlayStation 4's final price. Some are pointing at a price point of around $449 while other sources suggest that it would cost over $500. We are inclined to believe that it would be expensive at launch in November 2013 due to added GDDR5 memory costs.

Sony also revealed their new Dual Shock controller and PlayStation Eye for the PlayStation 4 at the conference tomorrow night. Their specifications and picture gallery can be seen below: 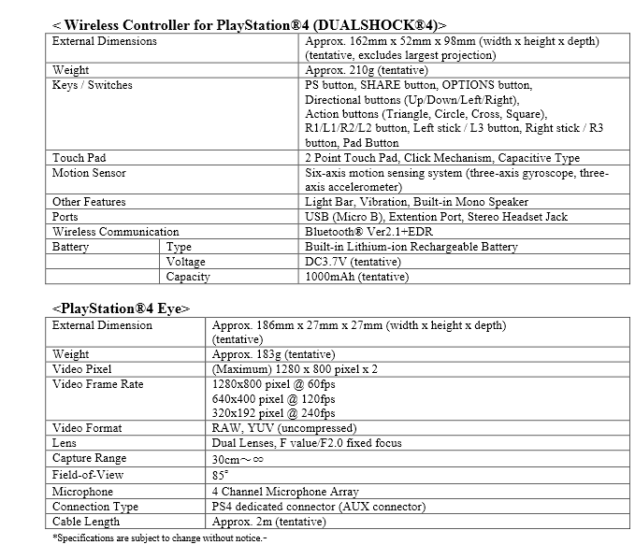