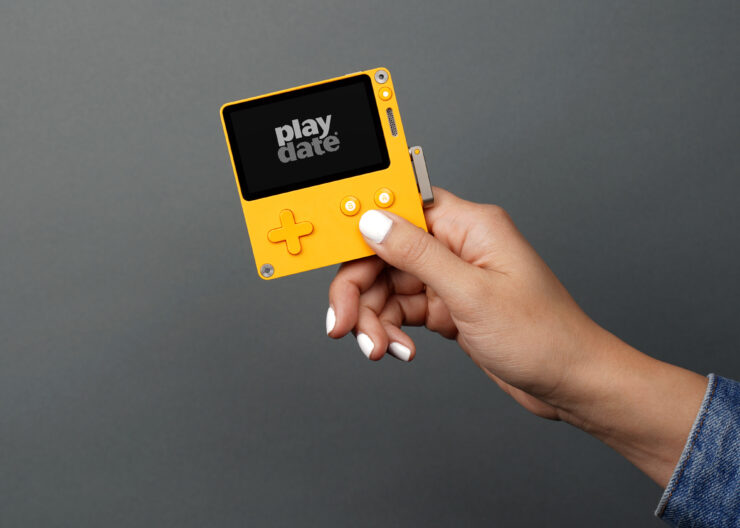 A new handheld gaming system was announced out of nowhere by Panic, a Portland-based company known for Mac software such as Transmit and Coda and for publishing Firewatch as well as the upcoming Untitled Goose Game.

The device will be called Playdate. Clearly inspired by Nintendo's original Game Boy, it's set to ship in early 2020 for $149 with pre-orders beginning in late 2019.

So far, one game has been revealed, Crankin’s Time Travel Adventure from Keita Takahashi (the creator of Katamari Damacy). The game will use Playdate's crank to let players control the flow of time backward or forward.

Below you can find a brief FAQ, though there's obviously a lot more information coming in the next months. Stay tuned on Wccftech to get all the latest on this rather unique looking handheld device.

Playdate is a brand new handheld video game system that’s not quite like anything else.

What’s unique about it?

What is a “season of games”? How does that work?

The Playdate Season is a collection of 12 secret games that are released to players over time — one a week.

Playdate’s games have been created by some of today’s most exciting indie developers, including Keita Takahashi, Bennett Foddy, Shaun Inman, Zach Gage, and more.

The games will remain a surprise until magically delivered to your device. One of the benefits of purchasing a Playdate early is that you’ll play the season in sync with the other first-buyers. You’ll be the first to know when new games are released, and the first to experience them.

What happens if I buy my Playdate in the middle of a season?

Your season will start the first time you power-up the device.

(If you want to receive the games that have already been released, that’s an option, too.)

Will there be more seasons? Or a game store?

It all depends on interest and sales. But we hope so!

Do the games go away at the end of the season?

Nope. Once a game is downloaded to your device, you can play it at any time.

How much will Playdate cost?

US $149. That will include the Playdate device, a USB-C cable for recharging the device, and a season of games.

Where does Playdate fit into the market?

Playdate isn’t trying to compete with the other devices that we already play and love. It’s designed to be complementary. It’s designed to deliver a jolt of fun in-between the times you spend with your phone and your home console; something to fill the moments when you just want a game you can pick-up and play.

We think — hope — that there are enough people in the world for whom the spirit and joyousness of this device will resonate clearly and loudly.

When is Playdate shipping?

We hope to take orders in late 2019, with deliveries beginning in early 2020. Subject to change, of course. This stuff is tricky.

What are Playdate’s dimensions?

We wanted Playdate to offer a distinctly different experience than the one you get from your phone or TV. That meant Playdate needed a different kind of display.

Playdate’s 2.7-inch (68mm) screen is a unique, black-and-white, low-power LCD from Sharp, with a resolution of 400 × 240. On the surface, it might be tempting to compare the screen to, say, the Game Boy. But Playdate’s display is quite different: it has no grid lines, no blurring, is extremely sharp and clear, and has much higher resolution. It sounds odd to say, but: it’s truly a “premium” black-and-white screen.

Is there a backlight?

No! Wild, right? In daylight, the reflective layer makes it look spectacular. At night, you can sit by a reading lamp and bask in how incredibly beautiful a modern, sharp, highly-reflective black-and-white LCD can look. It’s great.

Playdate contains both Wi-Fi and Bluetooth hardware, and Wi-Fi will be used to download games to Playdate. While it is possible to make games that offer head-to-head network play, our season will focus on single-player gaming.

What about the CPU? RAM? Storage?

The official answer is “real beefy.” We’ll discuss the specifications in more detail on launch.

What OS is Playdate running?

Playdate is running a custom OS designed by Panic.

What is the crank for? Does it power the device?

Think of the crank like an analog stick — but one you can turn endlessly. It tucks into the device nicely and adds a new element to Playdate games that can’t be found anywhere else. It does not charge the device.