It's easy to understand the appeal in escaping to the wilderness and leaving humanity behind. Gone are the regular worries of daily life, the concerns of living up to peoples expectations. Escaping from personal, family or work issues. That's exactly what Henry does, when he takes a job as a fire lookout in the wilderness of Nebraska. With only a voice on the end of a radio to keep you company, it's time to escape the rush of life.

Firewatch is essentially a walking simulator, but unlike others that don't give you much, if anything to do, you are Henry as he finds his way through his new job. You're in the middle of the Shoshone national forest in Wyoming and your every decision has a consequence, from what you decide to do with the most mundane of items, to how you treat and talk to other people. It's all about being human, making connections and making decisions.

You're greeted with a choose your own story at the very start, introducing you to Henry and his wife, Julia. What did you say to her when you first meet? What type of dog did you get? How did you deal with her coming in drunk at 1 AM? These small choices impact the latter part of the story and larger decisions will impact conversations you have with Delilah, your supervisor and the only person you talk to.

It may seem like a spoiler for me to say this, but it always happens in every story. Julia starts suffering from early onset Alzheimer's, your decisions in the text based introduction will decide whether she is in a care home in Boulder, Colorado, or whether her parents take the decision out of your hands and take her to Australia. From this very start you feel the human element of Firewatch, the impact of even your smallest of words and how it moves from leaving you with a smile on your face, to being downright sad.

What seem like small and insignificant tasks will run you through the majority of Firewatch. Delilah will tell you your job for the day, from picking up your supplies to simply watching. On your first day, Delilah spots a plume of smoke and sends you out to investigate it. You run into two abusive teenage girls, skinny dipping in the lake. Delilah has a laugh when you tell her about their 'panties' on the radio, they're abusive. Do you have a go at them, are you polite. The game never tells you, but you can even pick up their stereo and throw it into the water, destroying it. Choices, consequences.

These simple, seemingly mundane tasks, surround the mystery that begins when you head back to your tower after dealing with the girls. You see a figure watching you, even though Delilah's sure that there's nobody else in the forest. You get back to your tower and it's completely wrecked. The next day the phone line is cut, who did it? The mysteries of Firewatch only build and the conversations with Delilah, trying to figure out what's happening, only add to it as you can literally hear the concern in her voice.

What never fails to amaze me is how a large number of video games can have good voice acting, but never get to the level of being excellent. Voices can be used to convey so much without having to be blunt. A quiver here, a lowering of pitch there, anything and everything you can think of can be expressed in just a voice. Firewatch manages this with possibly the best voice acting I've ever heard and it manages to be mature, actually being mature without resorting to cliches or needless profanity. These are conversations you expect to hear from real adults and any abusive language is something that, if left out, would diminish how real the conversations feel.

Chatter on the radio is excellent as a result of the voice acting, but also from the outstanding branching script. Delilah is always there on the other end of the radio to help you out, explain some of the things you won't understand and help you out when you're a little lost, but also to cheer you up with a wisecrack or a joke at your expense. You have more than enough chances to respond, making for some excellent back and forth banter. It's really worth the time to simply get her talking about the most mundane of things, like a tree that has scratch marks on it or a medicine wheel. These conversations will build or break your relationship, which is more than tested as the mysteries of the forest plague you.

When the conversations aren't happening is when Firewatch is at its most serene, but later also at its most tense. It's easy to see how lonely and vulnerable you can be in the middle of nowhere, when you aren't alone and the only other person is clearly not friendly. This is where the game is most excellent with the use of lighting and audio. It's almost impossible to not find it scary when the only sound is the rustling of trees and bushes as you walk through the trees with little light, sure that somebody is following you.

Navigation through your section of the Shoshone isn't the most difficult of things to do. You'll find that areas are closed off until you reach the appropriate section of the game, though you do have small areas you can explore. Beyond a few secrets here and there, or the ability to be a hoarder by collecting books by a specific author to place on your bookshelf, or a turtle that you can adopt, there's not a great deal of things that will interest you.

What works in the game's favor is that it never holds your hand of forces you down a linear path and this allows you to explore. Even using the map and compass provided, I found myself getting lost a few times, but these times are also when I saw some outstanding scenery, complemented by the vivid colors and downright wonderful art design.

In the six hours it took me to complete my first play-through I took two hundred and ten screenshots, not to mention the eighteen shots you can take with a disposable camera found within the game. These eighteen photos offer a nice surprise on completion, they scroll with the credits alongside the images in the camera that have already been used, enhancing the conclusion of the story, as well as linking to an external site where you can order prints of them for $15 with free shipping.

Firewatch is a very difficult game to assess in many ways. The ending, without giving too much away, will be underwhelming to almost everybody. At the same time, I would argue that is also the most logical end that could be given to the events that happen. It further links into the overall theme of humanity, choices and consequences. It left me with a sense of realization, seeing the clues all around me in a different light, but also leaving me with a sadness that I didn't expect I'd feel.

Would I recommend Firewatch? Without a doubt. It's a perfect example of what developers can do when they bring together excellent storytelling, characters and dialogue. A simple, yet impactful story, that will stay with you after you've turned the game off and one that you'll want to come back to, to explore different paths, find the clues and secrets you may have missed the first time. 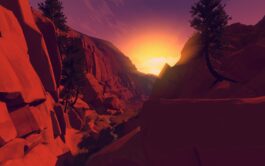 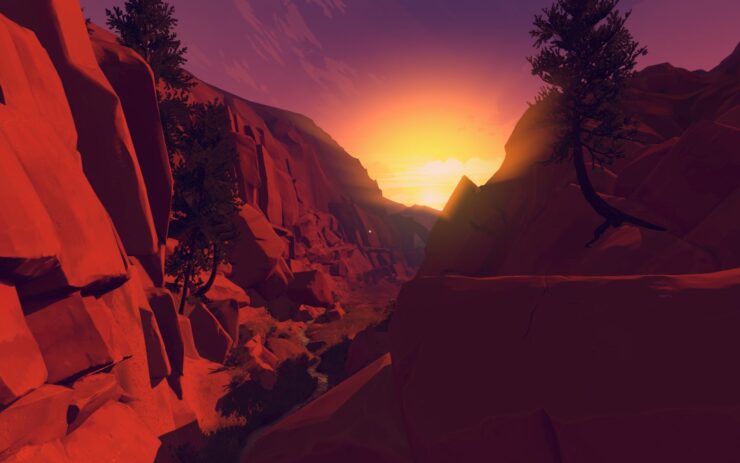 Firewatch is a short, succinct, game that tells the story it wants to tell. It offers a real look at developing relationships, choice and consequence, all with the beautifully rendered backdrop of the Shoshone national forest. It's a game that will stick with you beyond the finish and one that you'll want to go back to.