Pimax, the company founded in 2014 to deliver high-end Virtual Reality headsets, announced a new lineup of VR hardware at CES 2020.

The top of the line model, dubbed 8K X, has now entered mass production and is set to finally deliver on the promises made during the original Pimax Kickstarter campaign.

Featuring dual native 4K panels with an 'advanced full RGB pixel matrix', the manufacturer promises the highest level of image quality available yet in consumer VR headsets, with 'virtually invisible' Screen Door Effect (SDE). Pimax's trademark is the very wide Field of View of its headsets and this one will not be an exception with up to 200°(D), 170°(H) and 115°(V).

When using the 4K (per eye) native mode, the refresh rate of the 8K X will be capped at 75Hz. However, there is also an upscale mode (from 1440p rendering resolution) available which features up to 120Hz refresh rate.

Nicknamed 'hammerhead shark', the 8K X weighs 500g and features a fully modular design that can accommodate a comfort kit module, a modular audio strap (MAS) module, a hand motion tracking module, an eye-tracking module that enables Dynamic Foveated Rendering (if you own a GeForce Turing card, as it's based on Variable Rate Shading). Later this year, a wireless transmission module will also be demonstrated by Pimax.

Beyond the 8K X, the big surprise is the new 5K SUPER headset, capable of reaching 180 or 160Hz refresh rates, though its panels are 2560x1440 rather than 4K. As far as we know, it's the highest refresh rate available in a consumer VR headset yet, beating the 144Hz max reached by the Valve Index.

Last but not least, the company unveiled the entry-level headset called Artisan, whose pricing will start at $449. On paper, its specifications far exceed the Oculus Rift S on both panel resolution and max refresh rate. 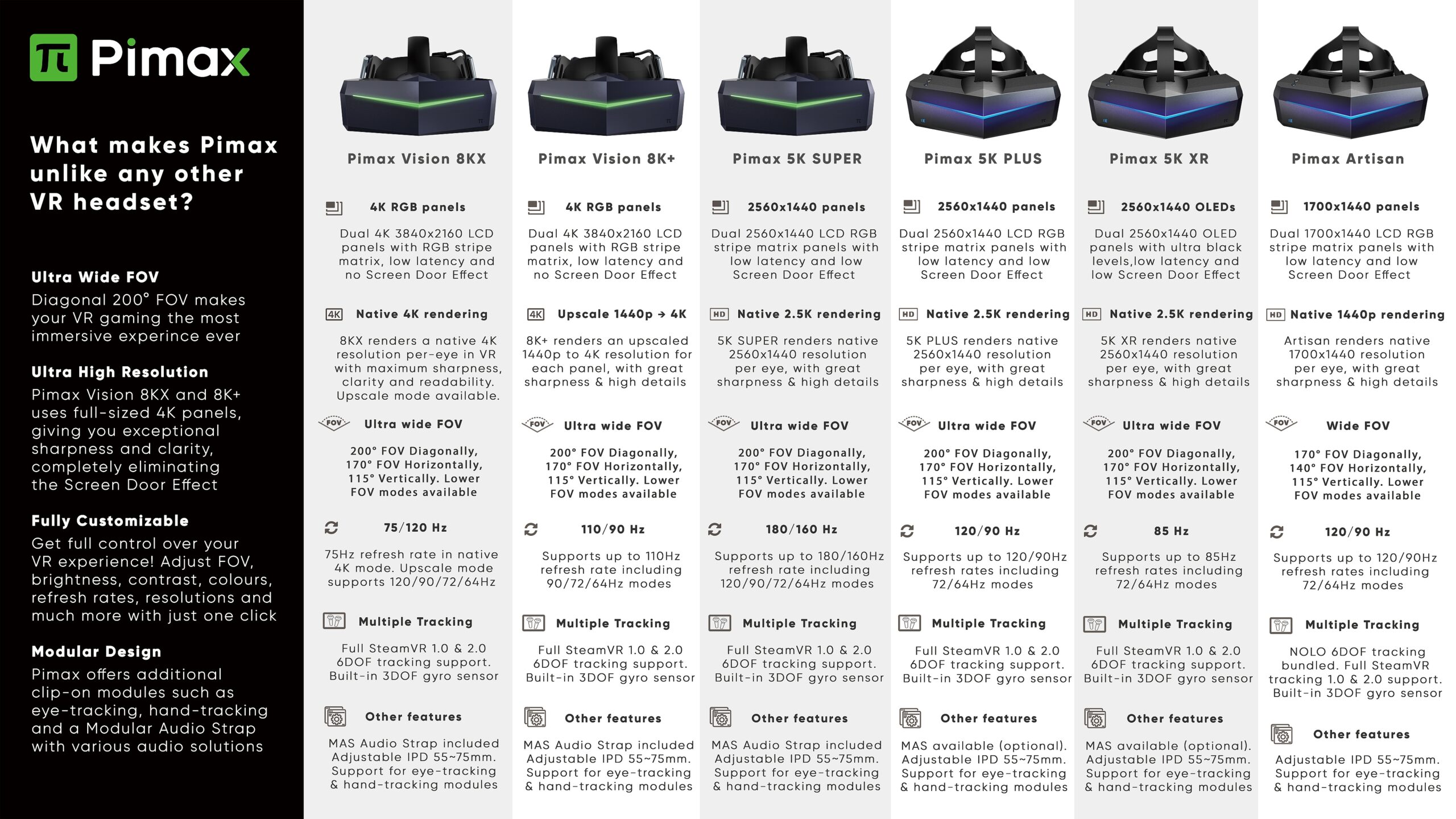 At CES 2020, Pimax also revealed the release of Brainwarp 2.0, a set of technologies based on NVIDIA's VRWorks that are meant to reduce hardware requirements and latency while boosting refresh rate. With Brainwarp 2.0, Pimax reckons its line of VR headsets can reach 120 Hz on average, thus surpassing the industry standard.

Robin Weng, founder of Pimax, said in a statement:

We are blessed with a hardcore and supportive VR community, together with whom we learn lessons and push the industry to the next VR Era. It’s a story of challenge to tell developing VISION 8K X, but eventually we made it! We are very proud of VISION 8K X and believe it is a standard for next-generation headsets, and are extremely excited for the refresh rate improvement for the entire P2 headset line and Brainwarp 2.0. Yet, headset alone will not be enough to achieve the ultimate immersion for the new VR Era, and we are looking forward to more excellent content created on this platform and are calling for more industry personnel and VR enthusiasts to make this journey together. Only together can we achieve great things.

Our own Keith May has an appointment at the Pimax booth at CES 2020, so look forward to his impressions in the near future.