Obsidian's Crowd- funded RPG, Pillars of Eternity, was bombarded by Twitter user @IceQueenErika, or Erika Imperial, demanding that a certain limerick be removed from the game. The limerick which was perceived as “transmisogyny” was found on the epitaph from Firedorn Lightbringer and read,

“Here lies Firedorn, a hero in bed.
“He once was alive, but now he’s dead.
“The last woman he bedded, turned out a man
“And crying in shame, off a cliff he ran."

“Characterising a sexual encounter as rape due to lack of trans disclosure, however, is transphobia. As is viewing sex w/ a TW as shameful.”

Jonathan McIntosh, the person who writes Anita Sarkeesian’s lines, commented about the situation as well, saying on Twitter…

Obsidian wanting to alleviate the situation, contacted Firedorn, the backer who wrote the limerick, and the limerick was removed.

“In the case of this specific content, we checked with the backer who wrote it and asked them about changing it. We respect our backers greatly, and felt it was our duty to include them in the process. They gave us new content which we have used to replace what is in the game. To be clear, we followed the process we would have followed had this content been vetted prior to the release of the product.”

“Actually, there was a choice. They asked me if I wanted to change in light of what happened. I chose to change it so that they can concentrate on the game instead of this PR nightmare. They weren’t going to change it, they asked ME if I wanted to. I can find another platform to write my controversial crap, and I will. They, on the other hand, did the right thing decide the fate of the epitaph. I chose to turn and allowed me to  into something that made fun of the bitch-bastards that were complaining.”

Obsidian did not fold under pressure, rather left the choice up to the backer who pledged $500 in the project. Firedorn chose altering the limerick to eliminate the issue.

The limerick has already been changed and it reads,

“Here lies Firedorn, a bard, a poet
He was also a card, but most didn’t know it
A poem he wrote in jest was misread
They asked for blood, so now he’s just dead” 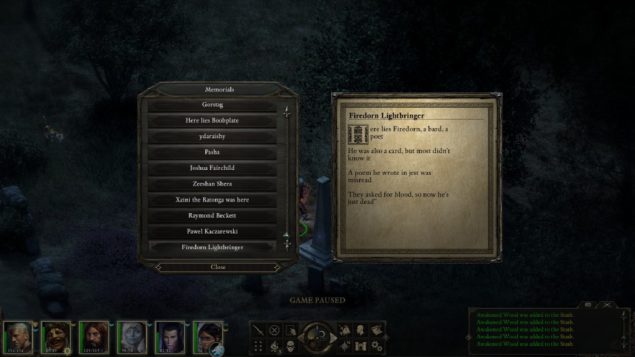 Pillars of Eternity was updated and patched to version 1.03, and can be found over on Steam or by visiting the official website.

A mod was made available following the recent patch, that brings back the old limerick. It can be downloaded from Nexus Mods. It’s called “Censorship BE Gone”.]