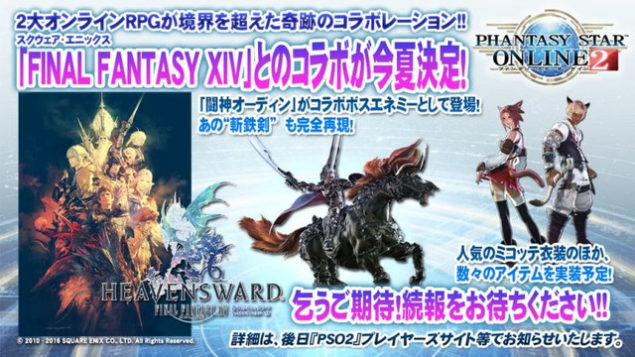 In a move that'll be bound to entertain RPG fans who were around in the early 90s, Phantasy Star is going to be getting a little Final Fantasy this summer.

Phantasy Star Online 2 - the much wanted MMO that's currently only available in Japan - will be getting a few familiar items and a pretty epic boss fight for those people who love both franchises.

Iconic summon Odin will make an appearance in Phantasy Star Online 2 as an understandably difficult boss fight, while clothes based around the Miqo’te race will also be available to pick up.

The new content will be available to players this summer, and so far there's no word of Final Fantasy XIV getting any sort of return deal as part of this collaboration.

The crossover was announced at Phantasy Star Festa 2016 by Naoki Yoshida, Yoshi-P,  who directed and produced the latest Final Fantasy MMO.

Of course, all of this is rather academic for most people outside of Japan, because as awesome as it is, SEGA have yet to actually release a version of Phantasy Star Online 2 for western audiences.

Despite coming out for PC back in 2012, and even though they just released a new version for PlayStation 4, it doesn't seem this popular online title will make the jump to the US or EU territories any time soon.