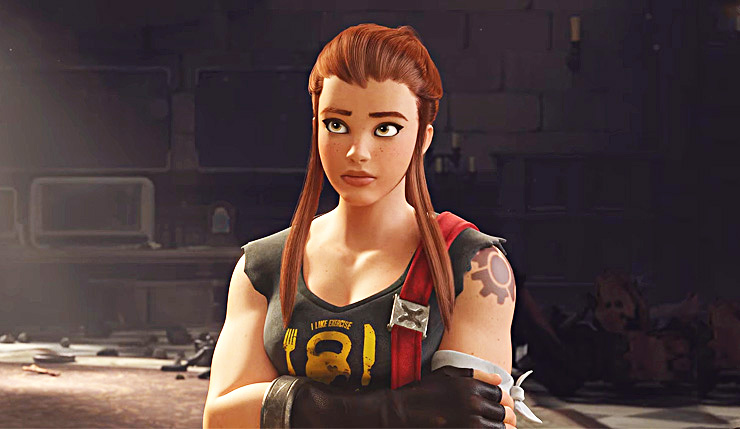 Blizzard has been heavily hinting at their next Overwatch hero for the past week or so, with most of the clues seemingly pointing toward Brigitte Lindholm, daughter of OG Overwatch hero Torbjörn. Of course, Blizzard loves to toss out red herrings and surprises, but this time, the company wasn't trying to fool anybody – Brigitte has been officially confirmed as Overwatch’s 27th hero. Check out Brigitte’s origin trailer, below.

Brigitte is sort of a tank/support combo, as she goes into battle wearing heavy armor and can use barrier shields, but can also toss out repair packs and automatically heals nearby teammates when she damages foes with her trademark Flail. Scroll down for a bio and rundown of Brigitte’s abilities.

The youngest of Torbjörn’s daughters, Brigitte is an adventurer who travels with her godfather—Reinhardt Wilhelm—to fight for those who cannot fight for themselves. Previously, she aided Reinhardt by repairing his armor but as time has passed, Brigitte has realized that there is some damage that she cannot fix. Her desire to help stronger than ever, Reinhardt is training her to fight while she built her own armor in secret. Now she fights alongside him on the front line, where she can make an even bigger difference.

Brigitte's melee weapon has an extended range, enabling her to strike multiple enemies with a single swing.

Brigitte throws a Repair Pack that can heal an ally. Any healing over that ally’s maximum health provides them with armor instead.

Brigitte throws her flail a long distance, dealing damage and knocking an enemy away from her.

Brigitte deploys a frontal energy barrier to absorb a limited amount of damage.

Once her Barrier Shield is deployed, Brigitte can dash forward to stun an enemy.

Brigitte moves faster and provides all nearby allies with armor that lasts until it’s removed by damage.

Brigitte may not be the most unique character Blizzard has cooked up, but it looks like she’ll be a very helpful addition. I suspect her combination of offensive, defensive, and support abilities will make her a popular choice. The fact that she’s kinda adorable should also help. You can play as Brigitte right now on the Overwatch PTR. Expect her to go live for all Overwatch players within the next 2 or 3 weeks.

What do you think? Are you into Brigitte, or would you have preferred some other type of hero?