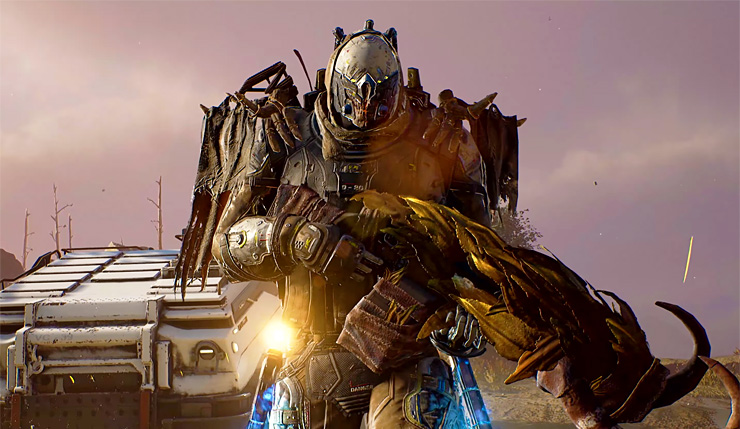 Last week developer People Can Fly promised they’d be sharing new details about their upcoming crossgen RPG shooter Outriders on monthly basis going forward, and today they delivered first info dump. The debut Outriders Broadcast delivers a ton of new gameplay, featuring a look at some new enemies and bosses, the game’s customizable UI and dynamic difficulty, and an overview of the Trickster class. You can check out the full show, below.

As we see in the video, Outriders’ UI can be customized to be as information-rich or bare as you want. The game’s level of challenge will change organically, with multiple difficulty settings or “world tiers” available to set manually if you so choose. Playing at a higher tier will be tougher, but you’ll also get more experience and better loot, including stuff that’s higher than your current level.

As for the Trickster class, they’re described a “closer range, hit and run” specialists with the ability to teleport and use various powerful energy-based melee attacks. Basically, they’re the Assassin class who can sneak in, bust up the enemies, and retreat to safety, although depending on how you upgrade it’s also possible to have a tank-like Trickster variant.

Haven’t been keeping up on Outriders? Here’s a quick official description:

Set in an all-new, dark sci-fi world, Outriders is a true genre hybrid that combines the depth and story of an RPG and the intensity of third-person shooter combat with awe-inspiring powers. Deep character progression and itemization allow for a wide variety of creative class builds, and evolve People Can Fly’s trademark over-the-top, skill-based gameplay to create a brutal RPG-shooter experience.

Outriders is scheduled to hit PC, Xbox One, Xbox Series X, PS4, and PS5 this holiday season. What do you think? Impressed by this latest gameplay showcase? Or is Outriders not doing enough to differentiate itself from the rest of the Destiny wannabes out there?