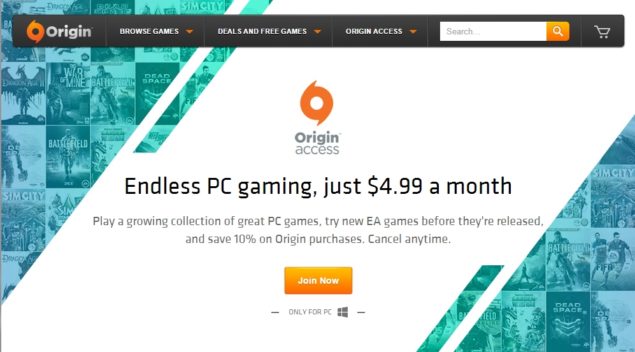 Origin Access, known as EA Access on Xbox One, is finally available on PC in select territories (US, UK, Germany and Canada).

Electronic Arts unexpectedly dropped the bomb earlier today, without too much fanfare. For those of you who are not familiar with how Origin Access works (it's the same as EA Access, by the way), this is a subscription service that allows you to play a selection of games freely as long as you're subscribed.

These games have usually been released in the past years, but that doesn't mean that they are not great. In fact, Origin Access will launch with the following games library:

That's not everything, though. Subscribers will also enjoy other perks, such as a permanent 10% off on all Origin purchases (that includes DLC and third party games, and it stacks with Origin sales/promotions) and early access to upcoming EA games.

These are usually ten hour trials that allow you to explore the games as you see fit within that time frame, unlike usual demos. Moreover, if you choose to buy the game you can carry over your existing progress from the trial.

The initial price of Origin Access will be $4.99 per month. A yearly subscription doesn't seem to be currently available, but it may be added in the future; the service should also become available for other territories soon, according to Electronic Arts. What do you think, folks? Are you interested?

@dex3108 Hey Dejan, it's available now in the US, Canada, Germany and the UK. More countries will follow soon.

Weekend Gaming Deals and Price Cheats From Around The Internet