It looks like the OnePlus 5 is attracting more issues with every passing week. If the "Jelly Effect" issue was not enough for warning the potential buyers, here is another problem that requires the company's attention more than ever. Some OnePlus 5 users are reporting a glitch on their device that makes it difficult to get through to the 911 emergency hotline.

There is a dedicated Reddit thread, where OnePlus 5 users are flocking to report the issue on their devices. It abruptly reboots when the user tries to dial the 911 emergency hotline. It is a scary issue as the device is basically of no use when the user tries to get through 911 in case of urgency. So far, three users have claimed about the issue on their device. A Redditor named Nick Morrelli has also uploaded a video of the issue on the device. The short video shows Morrelli’s OnePlus 5 abruptly rebooting when he dials 911. You can check out the video here. 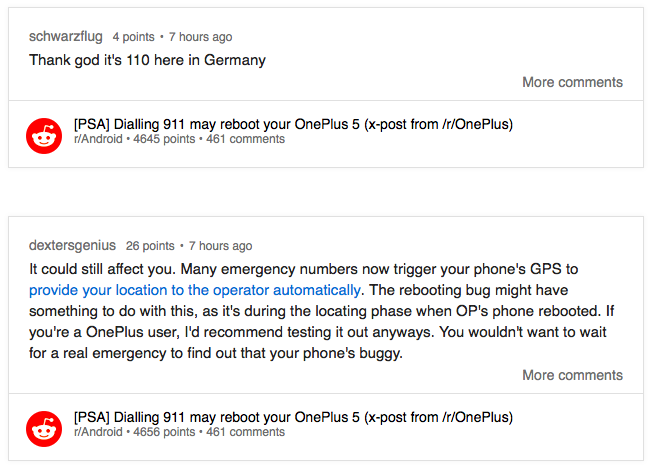 While most OnePlus 5 may not even notice the issue as who calls 911 every day, but this issue could pose as a major bummer in times of emergency for users. Imagine being stuck in an emergency, and your phone starts rebooting instead of getting you through to the 911 hotline.

For now, there is no explanation on why this issue is happening on the OnePlus 5. However, some users are speculating that it might have some relation to the device's GPS feature. It also means that the bug that's barring 911 calls, could also leverage to any emergency line that requires the phone's GPS system to offer location.

We can expect OnePlus to come up with a software to update to eliminate the bug from the device. OnePlus has also responded to the TheNextWeb, and gave this statement, "We have contacted the customer and are currently looking into the issue. We ask anyone experiencing a similar situation to contact us at support@oneplus.net".

Meanwhile, we would suggest OnePlus 5 users be aware of the issue and carry a secondary device if they are planning to go out of the city or anywhere far.

UPDATE: After receiving many complaints about the issue, OnePlus has finally started rolling out a software update to fix it. Here's the official statement by the company - We have begun rolling out the software update. Timing may vary by region. We encourage OnePlus 5 users to download the update. If users haven't received a notification, check for the update by going to Settings > System Updates.