Samsung is currently offering some good number of Android devices, and Galaxy S is the king. But now the Galaxy S is replaced by a new device which is powerful enough to blow your mind away. At MWC, Samsung officially announced the Samsung Galaxy S II, which is actually a successor to Galaxy S. We heard that the device will be out in May and it will be available in all the major countries. Now O2 UK is giving us a confirmation about the Galaxy S II that it’s coming to UK officially next month and now you can see the Galaxy S II in their “coming soon” section. 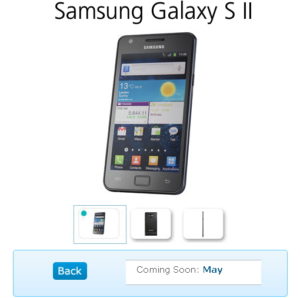 Well, no words on the price of the phone. But I believe that the device will be going for free on selected and expensive plans with 2-yr contract. (You may have seen the benchmark of the device on Quadrant, where the device is blowing all the devices out of the water. With whopping 3000+ score on quadrant, I think it’s the highest score achieved on a device running on Stock Rom.)

So people in UK, are you looking forward to the Galaxy S II? If yes then tell us the reason of buying it.