NVIDIA's next generation GeForce 20 family of Volta GPUs featuring GDDR6 memory is set to debut early next year. SK Hynix confirmed via a press release today that its brand new GDDR6 memory standard for high performance graphics processors will be available early next year to accommodate the production of all new high performance graphics processors.

Hynix did not mention any specific graphics companies by name nor did it make mention of any specific products that will make use of its new GDDR6 memory modules. Although, we know that NVIDIA's upcoming Volta graphics architecture will be powered by GDDR6 and AMD's mainstream Navi GPUs will likely make use of the same memory technology, which leaves HBM2 for the very top-end graphics chips from either of the two companies.

If you've been keeping count of your GDDR gigabits per second you'll notice that 16 is double that of the fastest GDDR5 memory available from SK Hynix today, which is rated at 8Gbps and comes in capacities of up to 1GB per chip. Hynix announced today that its upcoming 16Gbps GDDR6 memory chips will be mass produced for a client that's releasing a "high-end graphics card by early 2018". Nudge nudge wink wink, Volta.

Furthermore, the company went on to describe the bit-width of the memory interface of this mysterious "high-end" graphics card. Confirming that with a 384-bit memory interface this forthcoming GPU paired with 16Gbps GDDR6 memory will have access to 768GB/s of memory bandwidth. A figure that easily surpasses that of NVIDIA's highest end GeForce GTX Titan Xp and 1080 Ti graphics cards. Both of which feature 530GB/s of bandwidth. This translates to a 45% increase in bandwidth from Pascal to Volta. A figure that represents a clear hint at the performance of this upcoming Volta GPU that's coming in early 2018. 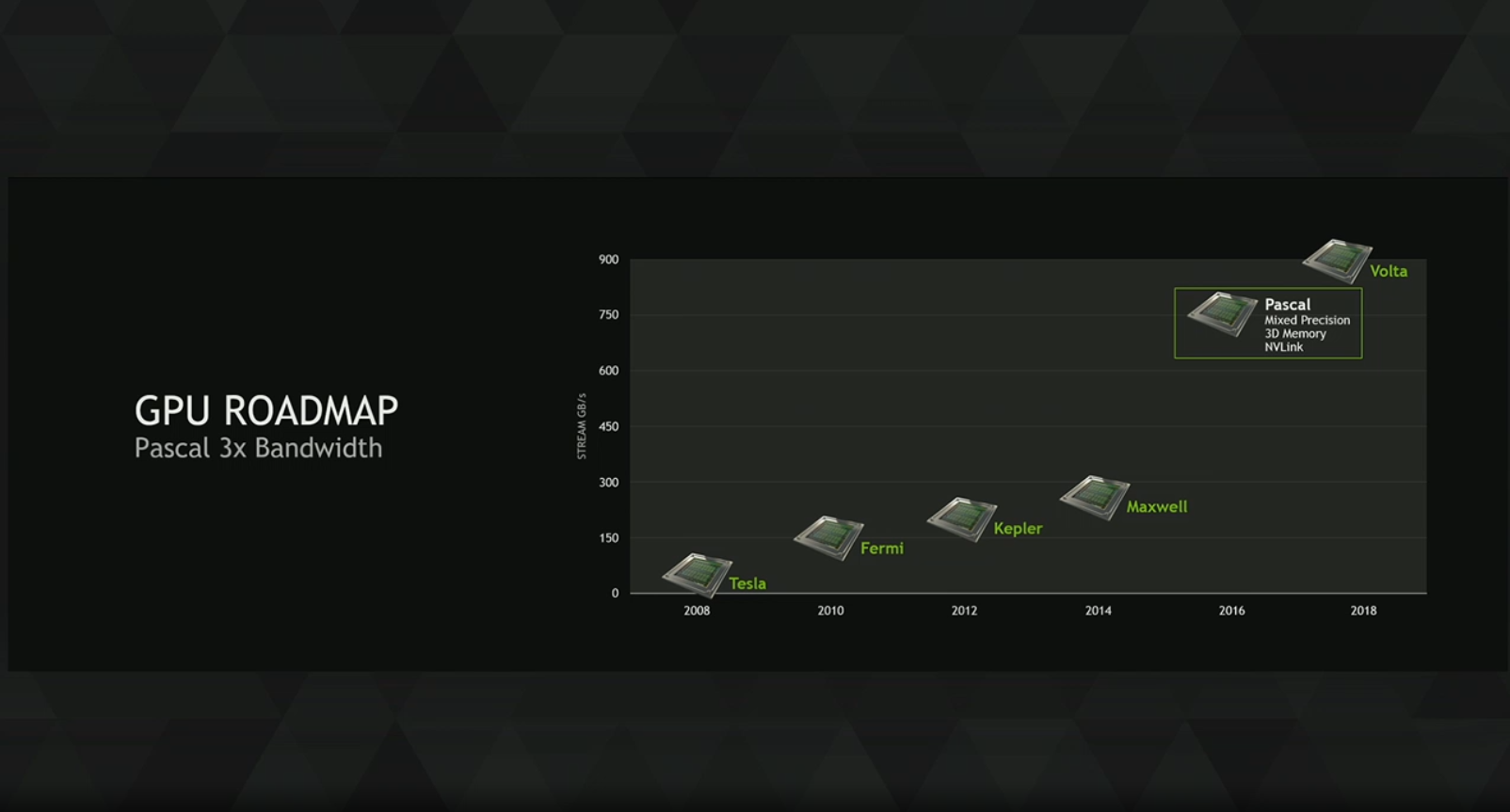 Seoul, April 23, 2017 – SK Hynix Inc. (or ‘the Company’, www.skhynix.com) today introduced the world’s fastest 2Znm 8Gb(Gigabit) GDDR6(Graphics DDR6) DRAM. The product operates with an I/O data rate of 16Gbps(Gigabits per second) per pin, which is the industry’s fastest. With a forthcoming high-end graphics card of 384-bit I/Os, this DRAM processes up to 768GB(Gigabytes) of graphics data per second. SK Hynix has been planning to mass produce the product for a client to release high-end graphics card by early 2018 equipped with high performance GDDR6 DRAMs...

What Happened To Volta's Stacked DRAM?

NVIDIA has always portrayed Volta as its architectural vehicle to embrace 3D stacked memory, namely HMC. Yes, that's not a typo. The Hybrid Memory Cube or HMC for short was Micron's competing technology to Hynix's High Bandwidth Memory or HBM for short. Both memory standards were in development at the same time and NVIDIA bet on the Hybrid Memory Cube early on.

As you can clearly see today this bet did not pan out. When Micron failed to deliver HMC on time Nvidia delayed Volta and instead introduced Pascal after Maxwell. This was not the company's original plan, as can clearly be seen from its early roadmaps. Although history is history and HBM today is ubiquitous in all top-end graphics processing units, including NVIDIA's GP100, AMD's Fiji and its upcoming Vega. So the question becomes why GDDR6? Wasn't Volta all about stacked memory technology? Well it's not that simple.

Stacked memory is significantly more complicated than GDDR and considerably more expensive to produce. This is exactly why we have yet to see HBM trickle down to mid-range GPUs and is precisely why we've only seen it in the fastest and biggest GPUs. It is very likely that for this precise reason NVIDIA will opt for GDDR6 across all of its GeForce graphics cards. And, once again, only use HBM for its enterprise/supercomputing Tesla products.

While HBM is more expensive than GDDR, it remains the most power efficient graphics memory technology available. On the very top end of the spectrum it can also deliver levels of bandwidth that are simply unattainable with traditional GDDR. It also enables the creation of small form factors that are not possible with GDDR. This is why it will continue to occupy this niche in the very high end of the market.

The new memory standard delivers this incredible amount of performance at a voltage that sits 10% below that of GDDR5 and GDDR5X. Which indicates a massive power efficiency advantage for the new technology. This will undoubtedly incentivize GPU makers to take advantage of it across all market segments to capitalize on the power efficiency gains, even in scenarios where GDDR5X or GDDR5 might have been "fast enough".

...GDDR is specialized DRAM for processing an extensive amount of graphics data quickly according to what graphics cards command in PCs, workstations, video players and high performance gaming machines. Especially, GDDR6 is a next generation graphics solution under development of standards at JEDEC, which runs twice as fast as GDDR5 having 10% lower operation voltage. As a result, it is expected to speedily substitute for GDDR5 and GDDR5X. SK Hynix has been collaborating with a core graphics chipset client to timely mass produce the GDDR6 for the upcoming market demands.

GDDR6 is regarded as one of necessary memory solutions in growing industries such as AI(Artificial Intelligence), VR(Virtual Reality), self-driving cars, and high-definition displays over 4K to support their visualization. According to Gartner, average graphics DRAM density in graphics cards is to be 2.2GB this year and 4.1GB in 2021 with CAGR of 17%.