It looks like the micro-console Industry is about to get an interesting surprise. A 500 GB model of the upcoming Nvidia SHIELD was spotted at an official listing of Amazon. The obviously premature listing has been pulled but not before it revealed a brand new product:  The Nvidia SHIELD Pro device - a micro-console slash "Android Tv" with 500 gigs of space. Compared to he 16GB that the base model offers - that is quite luxurious. 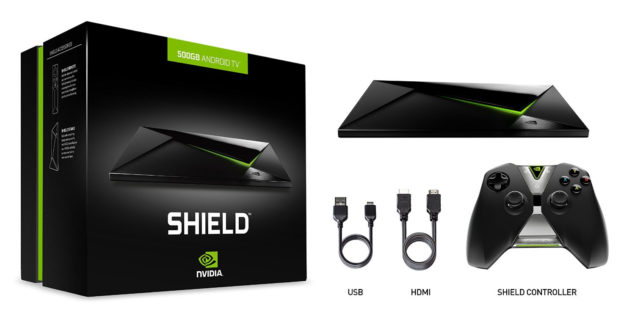 The Nvidia SHIELD device has a meager storage of just around 16GB (although expandable via a Micro SD card) but its big brother, the Shield PRO device has a relatively huge capacity of 500 GBs. That is enough to store a decent amount of games, movies and even seasons. The SHIELD console device was revealed back at GDC in March and it showed up (and was quickly pulled soonafter) yesterday at Amazon. Both variants of the NVIDIA SHIELD will have an HDMI cable, a micro-USB cable and a SHIELD Controller.

What Nvidia is claiming to achieve with the new SHIELD lineup is preposterous, somewhat done before and unlikely to succeed at the same time. Yet, it is without a doubt something that is potentially disruptive. If this product takes off, it will be successful beyond anything that we could have imagined. Tiny form factor, 4K playback  and AAA gaming with a competitive price tag is most definitely something with a very potential big market. By plugging into the GRID, you will eventually be able to stream around 50+ AAA titles with roughly 3 times the power of the Xbox One. Given below are the offline and online titles that the new SHIELD and SHIELD PRO devices will offer. The specification table has also been thrown in for good measure.