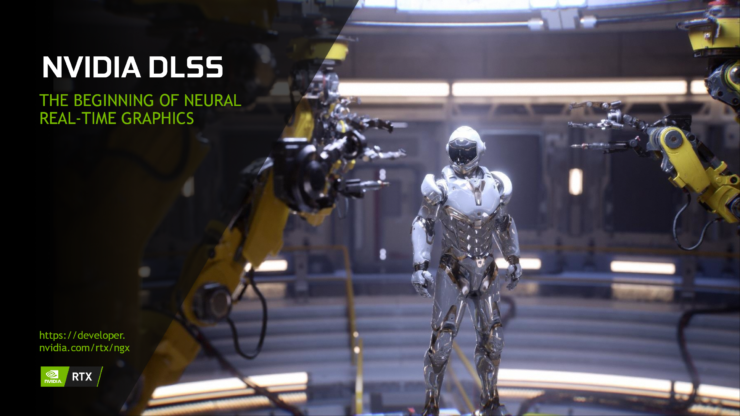 When NVIDIA announced their RTX lineup at Gamescom 2018 they also introduced what their RTX feature suite was. There was more than just DXR and Vulkan hardware-accelerated ray tracing support, as Deep Learning Super Sampling (DLSS) was another of the major features to be supported by the new GeForce RTX card lineup.

While the ray tracing support on the RTX cards was going to be aided by the dedicated RT cores and subsequently cleaned up with a realtime denoiser handled through the Tensor Cores brought over from the Volta architecture these AI accelerator cores would be pulling double duty with DLSS. As the name implies DLSS is a deep learning algorithm that can help pull off higher frame rates when enabled by rendering internally at a lower resolution and using the Tensor Cores to reconstruct the image at a comparable image quality to native resolution.

The early days of DLSS were a bit rough with games like Shadow of the Tomb Raider and Battlefield V's support leaving a bad taste in many people with its overly blurry final image. Metro Exodus came along and looked more convincing but after an update, we saw how much of a difference it could make when done better. Anthem was also a title that received a DLSS update, I played it at the time and found DLSS a welcome update for the performance boost, but I'm not sure anyone is playing that anymore. When Control launched we saw what was quite arguably the best implementation of DLSS to date and it was the first to launch with their newest version of the DLSS SDK.

What control did that the others didn't was to allow for a quality option in the DLSS options. This quality option came in the form of an internal resolution modifier that would not only allow you to target the output resolution but gave you two options in the render resolution. This gave you the choice of a bit of tradeoff in quality for performance if you so chose to. This type of choice has been extended to Wolfenstein Youngblood as well and that's what we're looking at in this article.

Wolfenstein Youngblood was announced early on to have RTX support and even become part of the game bundle that NVIDIA was offering for quite some time. Other than the lackluster reviews for the game itself it took quite some time for RTX features to be implemented into the game, perhaps that was because it's not using DX12 but Vulkan and needed a bit more work for that API or it was delayed to make use of the newer DLSS SDK but either way the results were much better here than in the past.

One of the major criticisms that DLSS caught was when NVIDIA added Image Sharpening to their Freestyle Filters and later moved into a global setting for their NVIDIA Control Panel. Many people found that reducing your render resolution to around 80% and applying Image Sharpening could result in a near native image and give you a solid performance boost. This is something we will be looking at in the image and performance comparisons just below.

RTX is ON for Wolfenstein Youngblood but what does that mean for performance and image? Ray tracing duties are handed off to the reflections spectrum allowing for surfaces that are reflective to do so naturally. This is one of those types of games that you don't really realize it's going on but when you do it's a nice addition. Turn it off and you're likely to notice a bigger difference without it after playing with it for a bit. What makes ray traced reflections so interesting in a game like this is that the engine is mature and rocks insanely high framerates and should be a good place to start adding these demanding functions into.

But as the charts below will show you there is a performance hit by quite a bit. We used this as an opportunity to test out the image reconstruction capabilities of the three different modes of DLSS found in Wolfenstein Youngblood as well as compare them to the method of manually reducing the internal rendering resolution to 80% and applying image sharpening. The performance metrics and images are all done at 1080p using a GeForce RTX 2060 FE. This configuration was done to represent the entry-level of the RTX platform and the fact that, historically, the 1080p resolution has the least benefit from utilizing DLSS and is the more difficult of the mainstream resolutions to accurately rebuild.

DLSS relies heavily on being able to identify objects on the screen so that it can upscale them appropriately. Therefore, 1440p and 4K have many more pixels to work with than 1080p when DLSS is activated and gives the algorithm a leg up over the lower resolutions to work with. After reviewing the images I felt this updated SDK that NVIDIA is working with is showing some real signs of progress. The images were all taken from the beginning of Little Berlin. 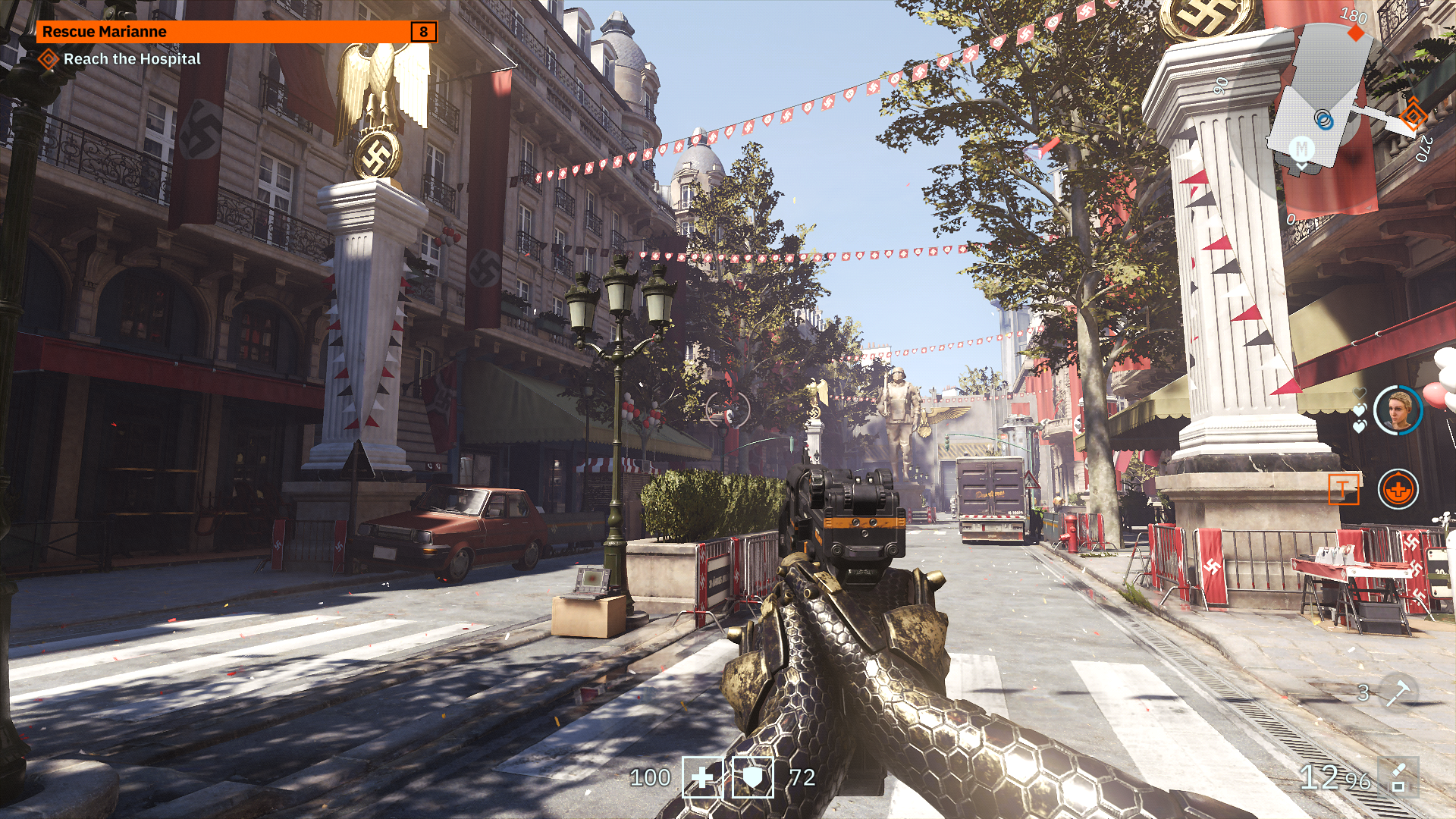 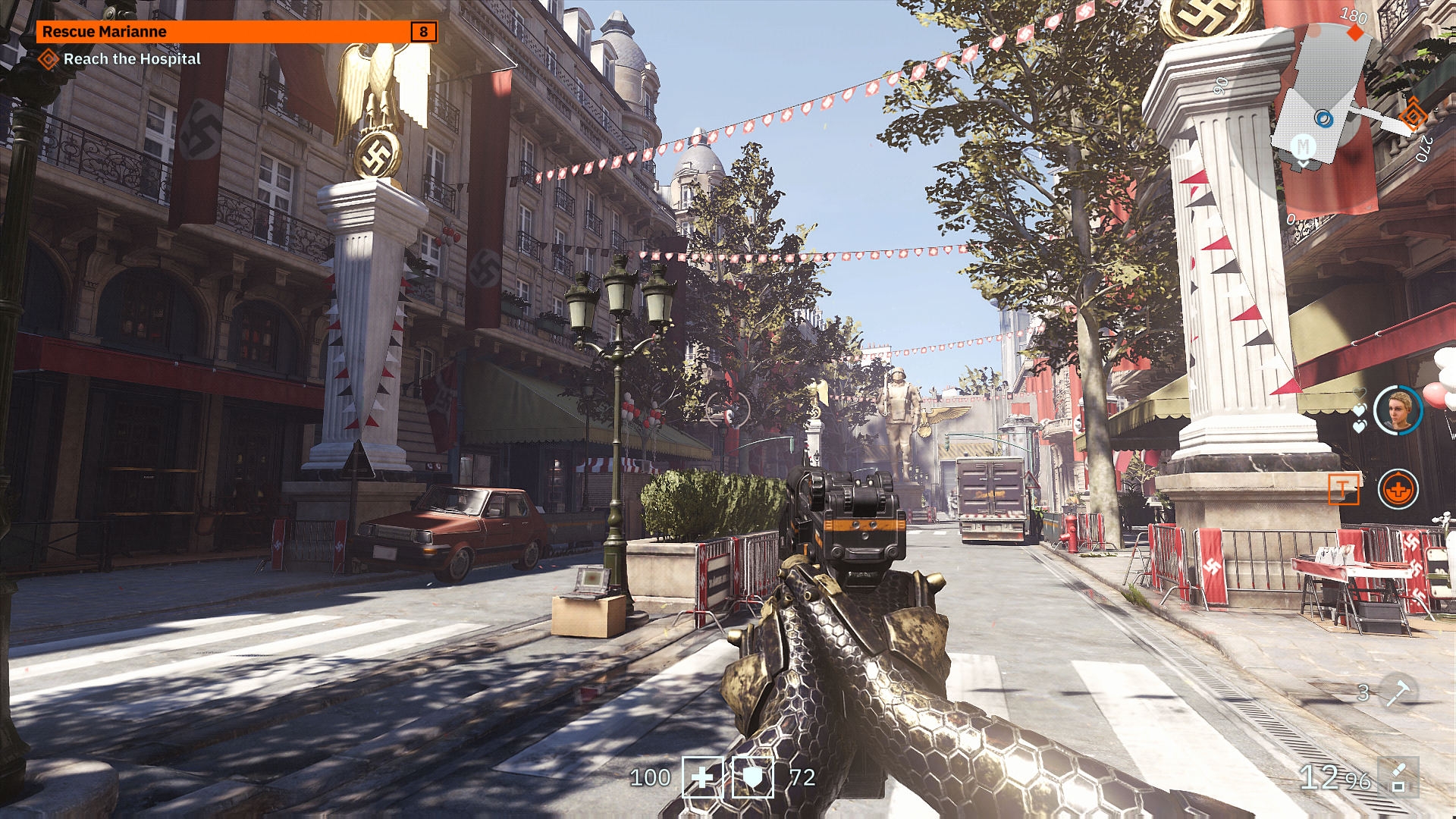 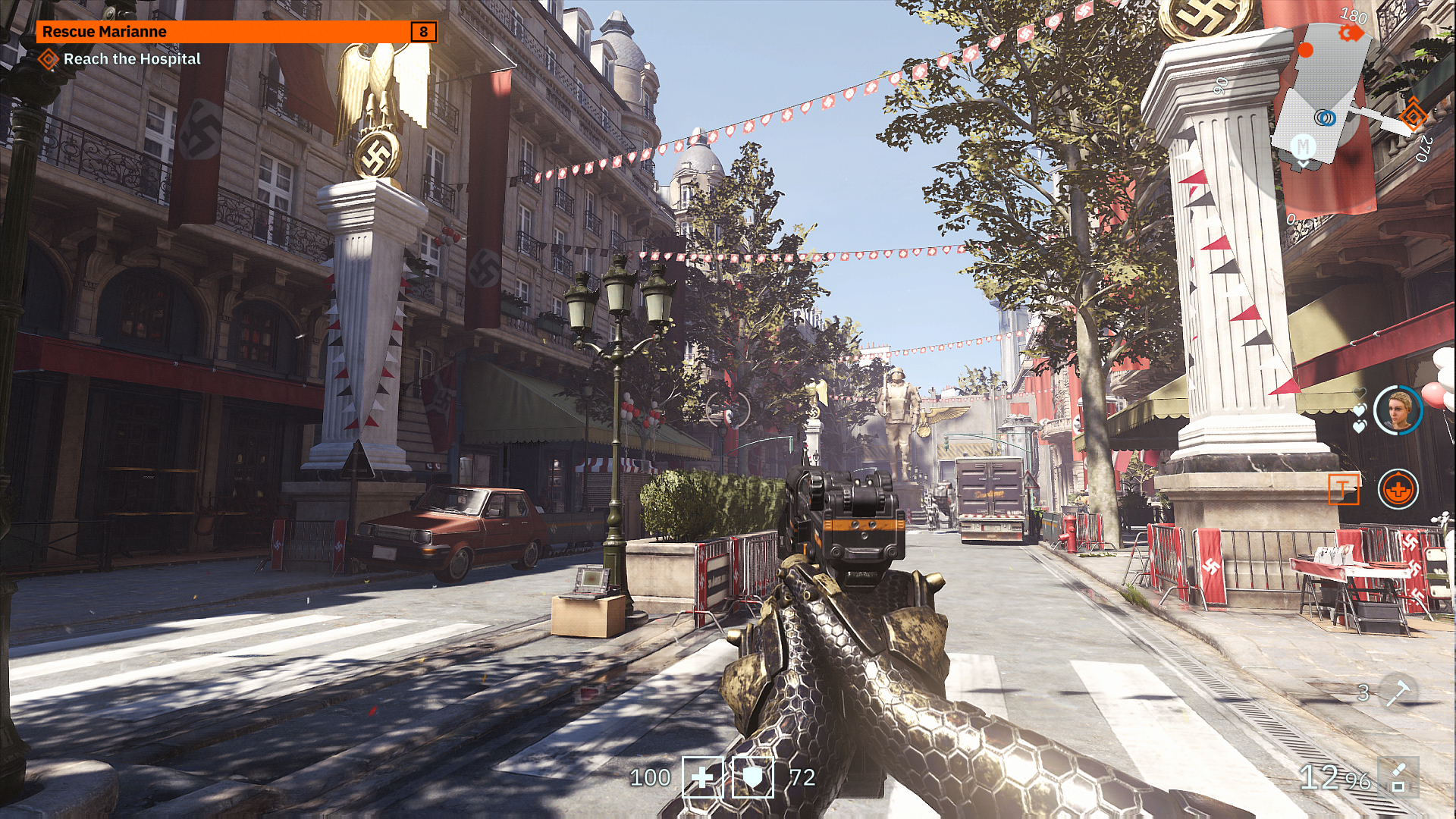 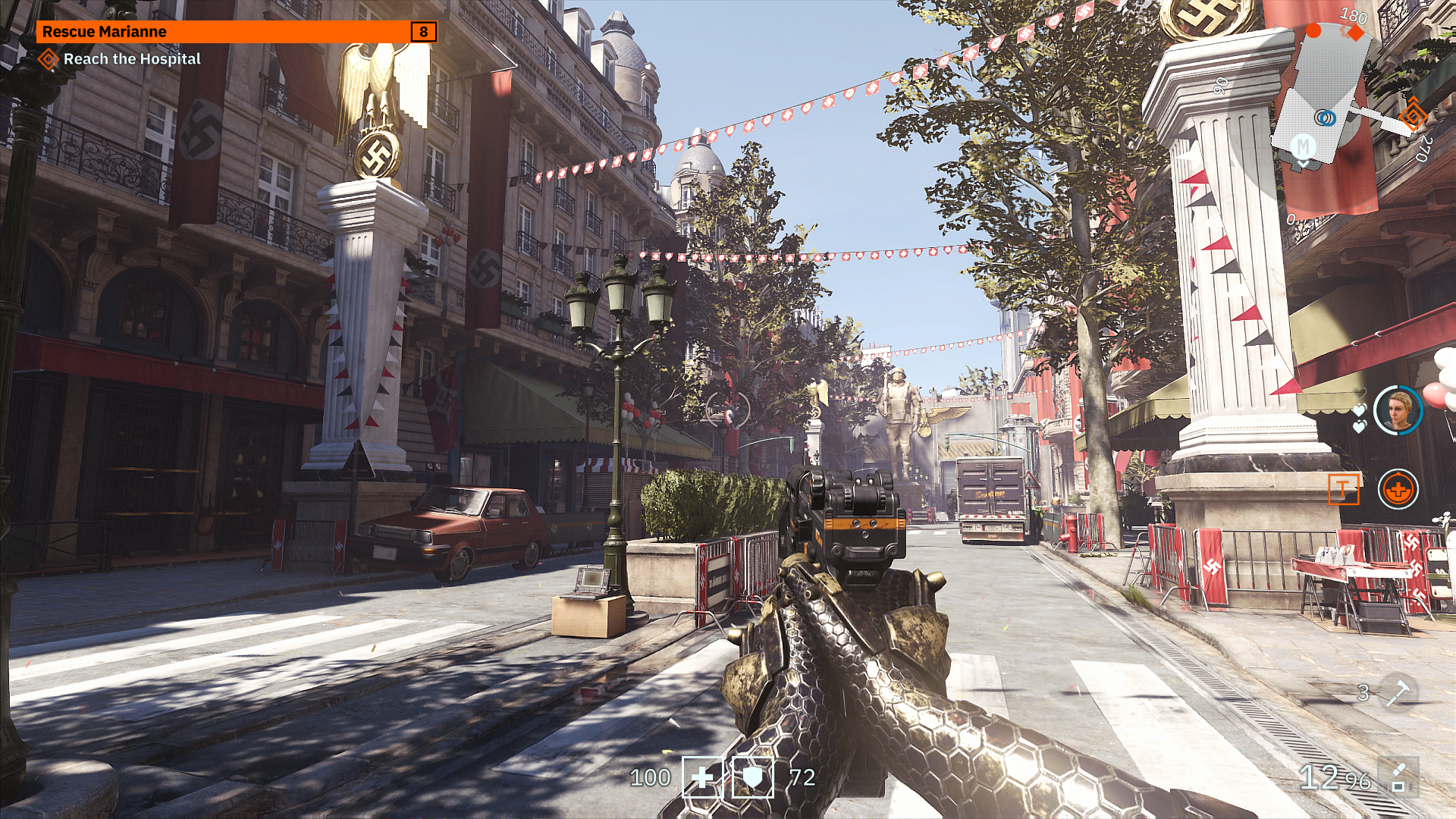 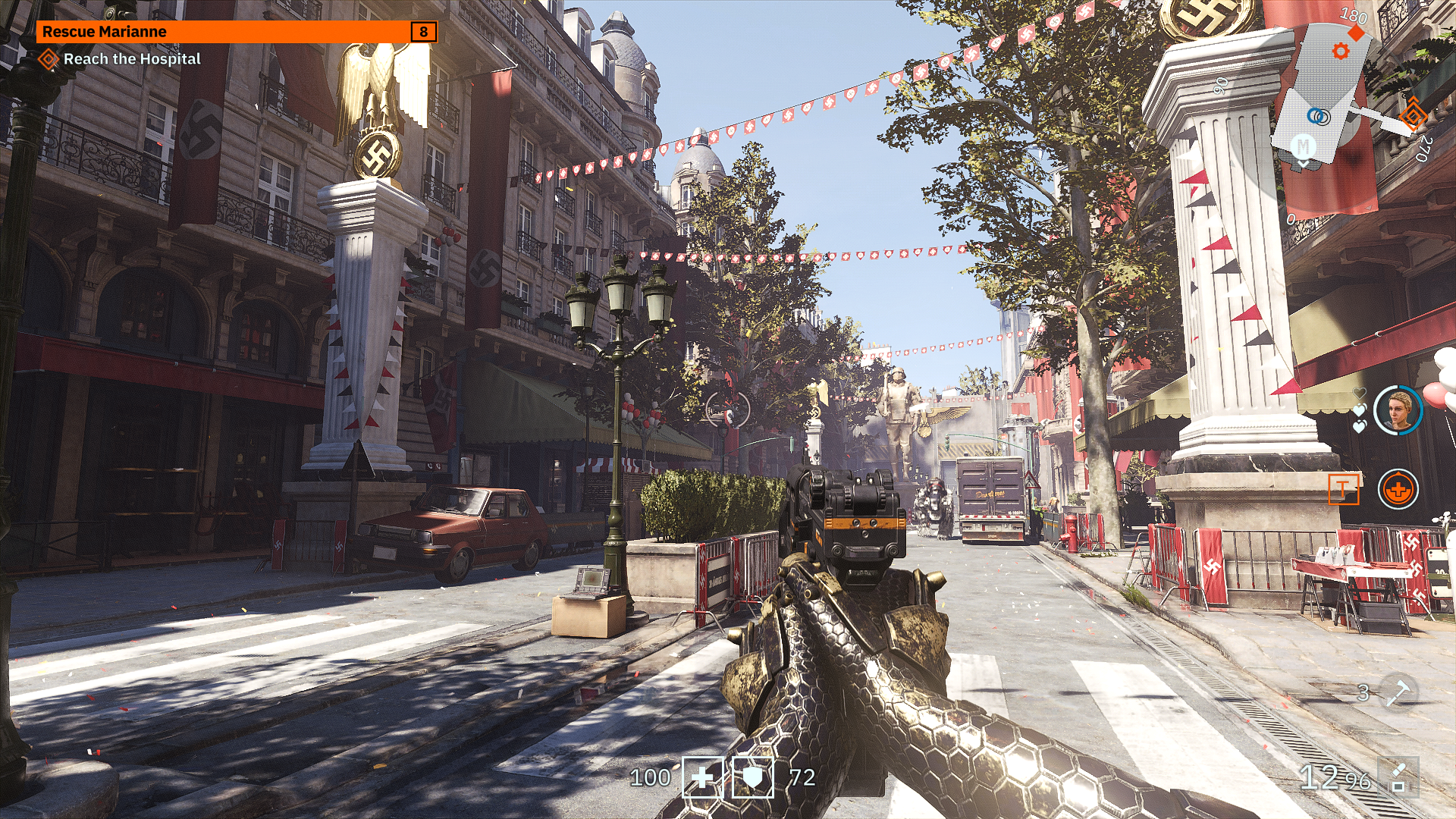 What do the various quality settings in the DLSS options mean in terms of internal rendering resolutions? Well, according to the team over at Digital Foundry we're looking at DLSS Performance targeting a 50% verticle resolution, DLSS Quality is aiming at around 66% verticle resolution while DLSS Balanced is obviously somewhere in between. Once you realize this is the amount of pixel reduction taking place it makes the final constructed image rather impressive. While the 80% + Image Sharpening result looks solid for what it is, according to the performance results I would struggle to find a reason to go with it over any of the DLSS options.

On to the performance results. Once again we're using the GeForce RTX 2060 Founders Edition for all our results and it is paired with a Core i9-9900K (5GHz all core) on an EVGA Z370 Classified K with 32GB of Crucial Redline DDR4 3600cl18. Since the update has happened the game now has a built-in benchmarking utility and we chose to use the Lab X benchmark as it is full of reflective surfaces to tax the options we're testing. As far as settings go we went with the Ultra preset option and made no changes outside of enabling ray tracing, and toggling DLSS and Resolution Scaling options (along with Image Sharpening through Freestyle).

Do ray traced reflections kick performance pretty hard? Yeah, on the surface it does. But even at 1080p on the RTX 2060 FE we see DLSS claw back a ton of that performance ranging between a 30-50% performance benefit over not using it. Most surprising to me was the benefit over using what people have been calling the preferred method of just reducing the render scale and pair with Image Sharpening. This method did increase the performance over native 1080p by around 10% and does look good enough, but not enough at all to convince me to not use DLSS in this title. If this is what we can expect out of DLSS going forward I feel the stories of its death were greatly exaggerated.

Is DLSS perfected yet? Not quite, I implore you to pull up these images and play 'spot the difference', and you'll find this is the hardest to do so since the tech was first released. There are spots where the DLSS image looks better and spots where native pulls out the win. But there is still work to be done and the learning side of things is never over. Small mesh details are still a bit of a struggle for DLSS, the likes of barbed wire and twigs along with details at the edge of the screen suffer from it. But for DLSS to really strike a positive chord with games and RTX card owners is for these options to be ready on a games launch day when people are most eager to play, not when gamers have moved on to other games.