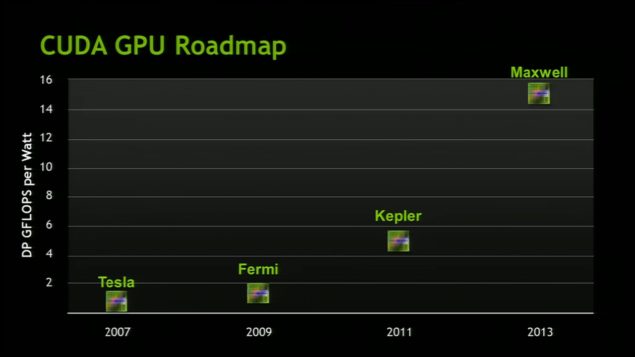 Fudzilla has got some exclusive info on Nvidia's Next Generation GPU Architecture aka "Kepler". According to the site, The company has already produced 28nm Samples of its new core.

The samples would be used as Entry Level Cores however come with TSMC's High Metal gate 28nm process which could also suggest the same chips would be equipped in the rumored "GTX 680" Graphics Cards which would be a High-End GPU. GF1x9 is the Code name being used for the chips.

The production of the chips wont start before 2H 2011 but demonstrations and architecture details of the Engineering samples would be shown off with in a few months. Global foundaries are expected to get the samples chips as early this Quarter of 2011. AMD is also preparing a revised architecture for their HD7*** Series GPU's which you can check out here.

Keplar from Nvidia would be twice as fast as the Fermi chips and would also enhance performance per watt due to the smaller die size which would consume lesser power.