The NVIDIA Maxwell architecture is making its official debut on 18th February which is next week. Prior to its arrival, we have seen a number of leaks regarding the PCB design, specifications and performance. The latest leak comes straight from Videocardz in the form of a block diagram of the upcoming GM107 core which uses Maxwell core architecture. 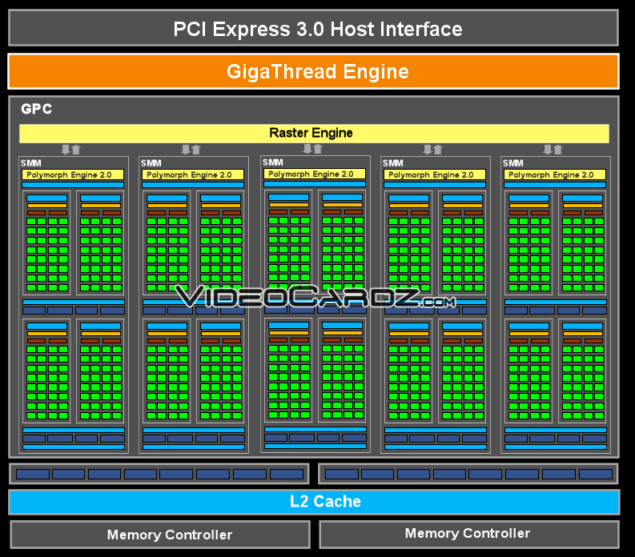 Information from the source suggest that the NVIDIA Maxwell architecture,  as expected would be extremely efficient. Maxwell is headed to consumers soon and will bring new levels of power efficiency, something that NVIDIA has strive to deliver with their Kepler generation of graphics processing units. Maxwell will have approximately three Tiers basically, Tier One will consist of 200W+ Discrete GPUs. The lowest tier will have 2W and 3W SoC Tegra Parts and ultra low voltage gpus. The middle tier will cover everything in between. The first GPU will of course be the GM107 and will come in both Desktop and Mobile parts. With such a large focus put towards power efficiency, some may doubt that the performance of Maxwell generation of graphics card will   not be great but you might want to read ahead.

The NVIDIA Maxwell GM107 based graphics cards will have a TDP of just 60W but we have seen manufacturer's adding an PCI-E power connector to add stability to their cards when in fact they won't need one at all. Maxwell will deliver up to twice the performance per watt as compared to Kepler which seems true as witnessed on the official NVIDIA GPU roadmap presented at GTC 2013. So with all the power efficiency tid bits covered, let's take a look at the block diagram itself which is courtesy of Videocardz! 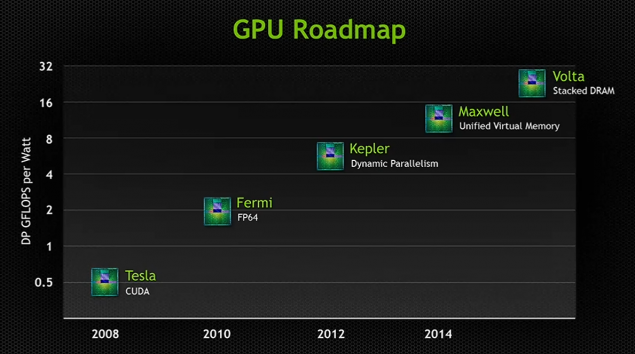 The GM107 GPC 'Graphics Processing Cluster' consists of five of these streaming multiprocessors which are connected to a Raster Engine. Each SMM consists of Polymorph Engine 2.0 which includes the Vertex Fetch, Tessellator, Viewport transform, attribute setup and stream output. Each SMM has 8 texture mapping units which equates to 40 on the whole chip and 16 ROPs while connected to two 64-bit memory controllers.

There's also a handful of cache on Maxwell which is 2 MB in total compared to 256 KB on Kepler GK107 which reduces GPU queuing. IPCC has been increased on the GPU core and balancing improvement to workload has been done. NVIDIA has improved their H.264 encoding and decoding with NVENC on Maxwell so that would result in better performance in ShadowPlay technology and improved sleep states have been implemented to reduce power input while the GPU is running idle. All of this is packed in a die which measures 148mm2  which means transistor density has been upped by 15% on the same 28nm process design. The source mentions that GM107 Maxwell would be able to compete against an GeForce GTX 480 with four times lesser power input which gives you an idea of Maxwell's power efficiency.

*Note – The clock speeds are not confirmed since these are factory overclocked variants.

Finally, the big question is that what comes next after GM107 and GM108? The answer is a new series of Maxwell chips with new naming scheme and 20nm process.

A few days ago, Geeks3d managed to find out some interesting GPU codenames from an NVIDIA BETA driver which hints at the upcoming Maxwell GM200 series which consist of three chips. The GM200 will replace the GK110, GM204 will replace the GK104 and the GM206 will replace the GK206. These chips will feature the 20nm architecture hence the new GPU naming scheme but are scheduled for launch much later in Q3 or even Q4 2014. The new Maxwell cores would bring some changes to the architecture with the biggest change being the addition of Denver CPU on the PCB. The 64-bit ARM Cores which would be fused alongside the GPU die will be used to offload certain tasks off the GPU core which can be maintained better by the CPU cores and can also be effectively helpful to render NVIDIA's FLEX which is their new Unified GPU PhysX technology. Maxwell is really interesting and we expect more details to hit when the first GPUs arrive on 18th February.